IQALUIT, NUNAVUT – Last weekend, Toronto-based wrestling promotion Blood Sweat & Ears traveled north — way north — to Iqaluit, Nunavut to put on a pair of shows on a road trip that ended up being as rewarding as it was ambitious.

Held at the Arctic Winter Games Arena on January 19 and 20, the events marked the debut of professional wrestling in Canada’s northernmost capital city, and quite likely — supporting records are being sought — in the entire territory. The shows were put on as part of a fundraising drive for the Inukshuk High School Huskies basketball team, and by all accounts, the weekend was even more successful than the sponsors had ever hoped. 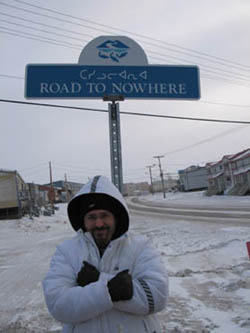 Featuring TNA Wrestling stars Rhino, Robert Roode and Traci Brooks, in addition to many of BSE’s homegrown roster, both shows were the epitome of what wrestling is supposed to be. In the ring, the competitors gave it their all, conveying the classic story of good vs. evil while thrilling the audience with athleticism, daring, and drama. The crowd, comprised mainly of children, lapped it up, genuinely excited to see their newfound heroes in action.

The crowd reactions throughout the shows were incredible, as the kids screamed loudly from bell to bell, reaching fever pitch at several points. Bad guys, when not being booed unmercifully, were scolded for being cheaters. The reactions were so genuine that one couldn’t help but get caught up in the thrall of the crowd.

“They were so loud,” said ‘Big’ Brian Youngblood, “that I literally couldn’t hear myself think out there.” Echoing that sentiment was Sebastian Suave who seemed awestruck by the heel reaction he got. “They really hated me,” he said with pride. “Nobody wanted to be cool and cheer the heels.”

Even indy veteran Tyson Dux, who has performed at numerous WWE and TNA events, was impressed by the reactions. “I’ve wrestled in front of 18,000 fans, but I’ve never seen a crowd like that. It was awesome.”

The Friday night show, a sellout of 650 people, was highlighted by a tag team match pitting Roode and Brooks against Rhino and BSE beauty Kelly ‘Au Naturelle’ Couture. Another match featured Dux taking on Brian B of the All-Starters. Other matches featured BSE mainstays Xtremo, Mike Alias, Tiger Star, the Revoluchas and the Blackouts. No matter where the wrestlers appeared on the card, the crowd gave every match a main event feel and treated everyone like a bona fide superstar. 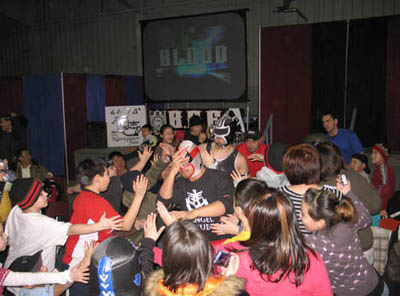 The Revoluchas are mobbed on their way to the ring.

On Saturday, the setup was rearranged to allow for an additional hundred seats, and the second consecutive full house was even more amped than from the night before. In turn, the wrestlers stepped up to deliver some of the greatest performances of their careers.

The main event of that night saw Roode and Rhino battle it out in a hardcore match. They were swarmed by kids as they fought all around the building and into the stands. When Rhino won after goring Roode through a table, fans excitedly threw their hats and masks into the ring and gave both men a standing ovation. A similar reaction was experienced when Brent B. defeated Dux in a stellar match for the BSE Arctic championship (a belt introduced specifically for the Iqaluit show and not part of BSE’s storyline continuity). Explained BSE co-owner Rob Fuego (who also pulled duty as referee for the shows), “We felt that we had to reward the fans for the great response they gave us — we knew the kids would (appreciate) a title shot, so figured what the hell. It’s all about giving the audience what they want, right?”

That was essentially the theme for the entire weekend. When not performing, the wrestlers gave of themselves to the entire community. Some of them visited local schools to talk to students about the dangers of drug abuse and spread positive messages like staying in school. Others braved the extremely cold weather to participate with the locals in playing outdoor games, or visited the local museum to learn about Inuit culture. Meanwhile others made stops at the area stores, the local gym, and other locations to meet the community personally. These appearances really helped the wrestlers make connections with the fans. 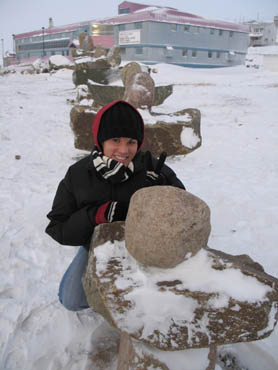 Connections that, like the overall experience, will not be soon forgotten. Consider, for example, the comment by Brooks who, even though she found Iqaluit “way too cold — I’m used to Orlando weather”, conceded that “(the trip) was so much fun. I loved being out there in front of that crowd. I’d definitely come back.”

That might actually be in the cards for BSE. Based on the success of the weekend, the company’s management was looking at their schedule to see when they might be able to make the return trip.

“We are so happy to have brought BSE up here,” said company spokesman Arda Ocal. “The people here were so welcoming, the reception at the show was tremendous. We’ll see what we can do to come back.

Bob Kapur is the colour commentator for BSE, and was happy to be part of the Nunavut experience. E-mail him at [email protected].