Bomber Kulkavich: From the mat to the Bottom of the Sea

The nom de guerre, Bomber Kulkavich, is not exactly one familiar to TV viewers of the 1950s and 1960s. But with his wrestling career behind him, Henry Kulky found an audience as Seaman 1st Class Max Bronsky on Hennesey, Otto on The Life of Riley and Curly Jones on Voyage to the Bottom of the Sea.

Henry Kulkavich’s wrestler-turned-movie star story is not exactly unique — like 95% of the grunt-and-groaners who got into the film biz in the 1950s and 1960s, he owes his big break to Mike Mazurki. 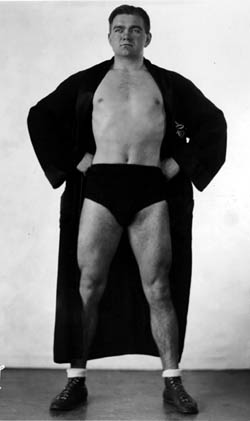 Born Henry Kulkavich on August 11, 1911, in Hastings-on-the-Hudson, NY, “Henny” was interested in physical fitness as a boy. As a teenager, he gave boxing a try. He had fought only six bouts when he was offered the job of teaching wrestling at St. Matthew’s Lyceum in Hastings.

From there, the hyperbole of wrestling/film seems to kick into gear.

In 1939, he was apparently convinced to give professional wrestling a chance by wrestler-turned-promoter Stanislaus Zbyszko, who took him to Argentina to compete. Promotional bumpf claims that Bomber Kulkavich won 172 matches there while losing only three, and also won the South American judo crown.

Yet in a 1960 interview with the Hammond Times, Kulkavich claimed to have lost or tied the majority of 7,000 bouts in South America, Canada and throughout the United States. The number of matches alone is exceedingly high for someone so infrequently found in results listings; but the $15,000 a year salary as a wrestler sounds even more comical.

Heading west to California with wrestling on his mind, Kulkavich renewed his friendship with Mazurki, and it was Mazurki’s agent who apparently hooked the newcomer up with a role in the James Stewart flick, Call Northside 777.

From that point on for the newly christened Henry Kulky, wrestling was mainly something for TV and movie writers to bring up.

Here’s an example: The courtroom melodrama Illegal, which came out in 1955, starred Edward G. Robinson. Robinson wins a manslaughter case by discrediting the prosecution’s star witness with a right jaw that knocks him out cold. “On the receiving end of the Robinson haymaker is Henry Kulky, known in wrestling as Bomber Kulkavich,” reads one preview. “As a prosecution witness, Kulky makes the mistake of boasting that no man the size of Robinson could knock him out. Robinson effectively proves the witness was wrong.”

Kulky was generally a quick-wit in interviews, self-deprecating in regards to his former career and his break to get into Hollywood. “I learned to act on the mat,” he once said. “The boys down at the gym will kill me for that one!”

In 1954, he teamed with Mazurki in New York Confidential, where they portrayed ex-boxers turned trigger men. In one scene in an apartment, they turn off a television set with wrestling playing because, says Mazurki, “Them TV rasslers is a bunch of phonies.”

Other film appearances for Kulky included The Robe, A Star is Born, Hell and High Water, No Holds Barred, and Up Periscope.

In 1949, he began playing Otto Schmindlap on The Life of Riley, which starred William Bendix. The show, which evolved from a radio series, was about Chester A. Riley, who worked as a wing riveter at an aircraft plant, and Kulky portrayed a co-worker of Riley’s. The Life of Riley ran for five years.

Jackie Cooper’s Hennesey series marked Kulky’s next big TV role. For three years, he was Seaman 1st Class Max Bronsky, the chief cook on the boat. The show ran from 1959 to 1962, and was close to Kulky’s heart — during the Second World War, he was a bosun’s mate on anti-sub patrol in the Atlantic and Caribbean.

At least one episode of Hennesey harkened back to his wrestling days. A 1961 TV recap proves it: “The Jan. 22 episode of Jackie Cooper’s Hennesey on CBS will use a 12-year-old named Karen Balkin of Houston, Texas. In ‘Little Girl,’ she will play numerous scenes with Henry Kulky, the popular Max Bronsky character of the show. Karen and Kulky have been friends since infancy — her infancy. Kulky was known as ‘Bomber’ Kulkavich when he wrestled in Houston for Karen’s promoter-father, Sidney Balkin.”

He also appeared on such television shows as Father Knows Best, The Red Skelton Show, Maverick, The Lone Ranger, Bonanza, and The People’s Choice.

The science fiction series Voyage to the Bottom of the Sea would bring Kulky his final, lasting role. He was Chief Curly Jones.

“A veteran of more than 500 appearances in motion pictures and television, character actor Henry Kulky never had an acting lesson. His grounding in drama is credited to his 7000 performances as Bomber Kulkavich, wrestler,” reads the promotional material for the series. 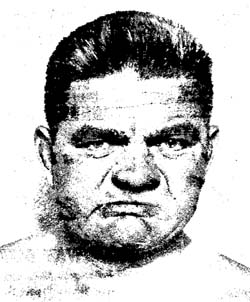 “Henry was, in the vernacular of today, a big teddy bear. Not terribly bright, dreadful at remembering his lines and picking up his cues. Could have been a far better actor, but still was one hell of a nice guy who would do anything for anyone,” said Voyage to the Bottom of the Sea stand-in, dialogue coach and extra Ray Didsbury to Mike Bailey, who runs “Mike’s Voyage to the Bottom of the Sea Zone,” tribute website to the show.

“I became a fan of Henry Kulky the very first time I saw him in Hell and High Water, or whichever one of those World War II movies it was I first saw him in,” wrote Bailey. “Like John Wayne, Kulky always played pretty much the same character — himself. And that was fine with me, because I liked his mug, and for that matter, still do. I liked his hulking, tough, indomitable, yet sweet and kind ways.” 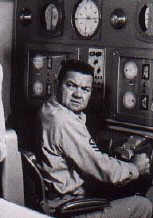 It was while on Voyage to the Bottom of the Sea that Kulky’s health began to fail. In October 1964, he was sportfishing 60 miles off the coast of San Diego when he was stricken with acute gastritis. A Coast Guard helicopter was dispatched to bring him to Sharp Memorial Hospital, where he was later discharged.

A few months later, on February 12, 1965, he collapsed in a tavern in Oceanside, California, and was rushed to Oceanside Hospital, where he was pronounced dead on arrival. It was a heart attack. Kulky was 54 (though listed as 43 in the news of his passing), and the obituary said that he left no survivors. Funeral services were held on Thursday, February 18, at St. Roserans National Cemetery, Point Lorna.

From all accounts, Kulky would not have wanted to have his friends mourn. He always realized that he caught many a good break in his life.

“There isn’t a day that goes by that I don’t get a check in the mail from somewhere or some show,” Kulky told Terry Vernon of the Long Beach Independent in 1964.