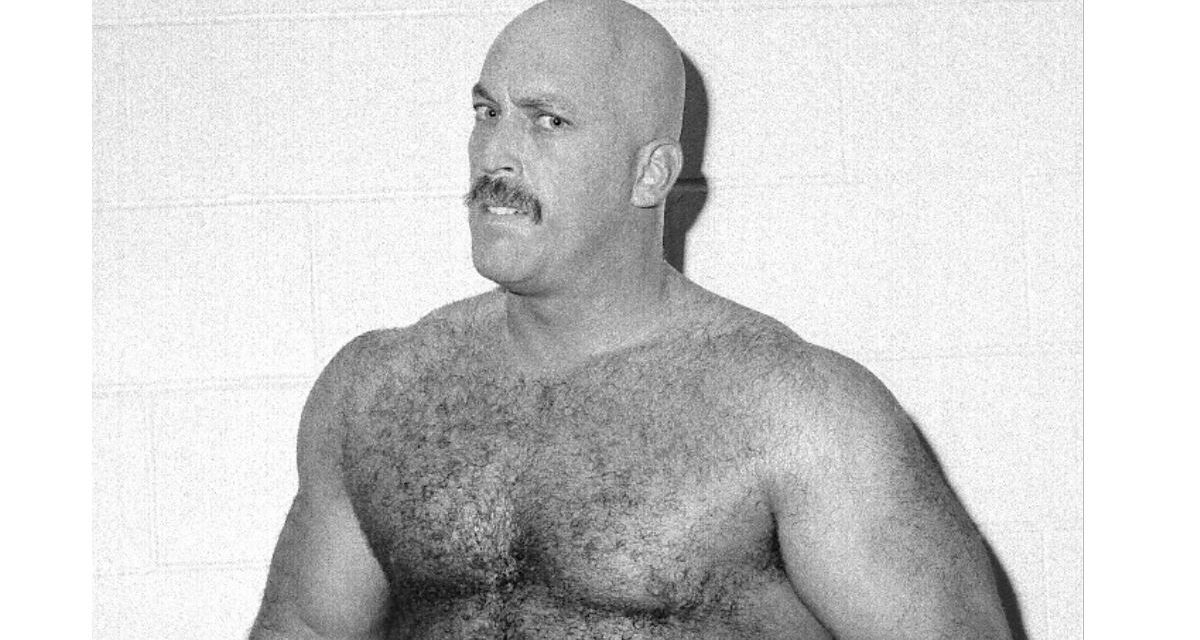 Dave Sheldon, a 1980-90s wrestler known at various times as the Angel of Death, the Russian Assassin and the Black Scorpion, has died in Bedford, TX.

Little is known at the moment about the cause of death. His passing was first reported by Dallas radio host Norm Hitzges on SportsRadio 1310 The Ticket today, as Hitzges and Sheldon were reportedly friends.

Sheldon broke into wrestling in California in the early 1980s, but really began to hit his stride and learn his craft in Calgary’s Stampede Wrestling. He would do three separate tours of Stampede, in 1987, in 1988 and in 1989. 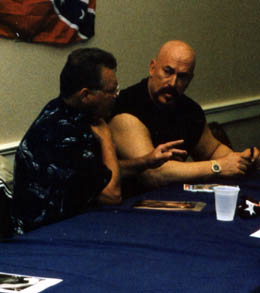 Buddy Roberts and Dave “Angel of Death” Sheldon in August 2003 at a convention in Arlington, TX. Photo by Meredith Renwick

Billed as The Angel of Death, he feuded with other up-and-coming stars like Owen Hart and Brian Pillman. His imposing, 6-foot-5, 300-pound frame, shaved head and mustache made for a memorable villain to compete with the territory’s babyfaces.

His best-known run came in the burgeoning UWF, run by Bill Watts. He competed with various partners against the Fabulous Freebirds, and later was a defacto bodyguard for the ‘Birds, filling in often when Terry Gordy was in Japan. In World Class, Sheldon would be considered a Freebird as well, teaming with Buddy Roberts and Iceman King Parsons.

In 1988, he was brought in to Jim Crockett Promotions, commonly known at the time as the NWA. Sheldon was put under a mask as the Russian Assassin, teamed occasionally with Jack Victory, and used primarily as a vehicle to turn Ivan Koloff into a hero.

Around Texas in the World Class promotion, the Angel of Death fought the likes of Johnny Mantell and The Missing Link (Dewey Robertson). In 1990, he became WCCW Texas champion by forfeit from Kerry Von Erich, and would lose the title back to Von Erich as well.

For the first-half of the 1990s, Sheldon seemed content to stick around Texas, fighting for whatever promotion was trying to fill the void left by the failure of World Class. This included the Texas Wrestling Federation, where he held the tag team titles with Abdullah the Butcher in 1990, eventually losing the belts to a not-yet “Stone Cold” Steve Austin and “The California Studd” Rod Price. In the Dallas-based Global Wrestling Federation in 1992, he paired up with and later turned on Eddie Gilbert.

On occasion, Sheldon would appear in WCW, including a 1991 attack on El Gigante with fellow baddies Kevin Sullivan and One Man Gang. His leg was severely hurt at one point, which curtailed his career, which ended in 2000.

Over the last few years, Sheldon has appeared at a few wrestling events, including the 2001 Cauliflower Alley Club reunion in Las Vegas, where he was among the Stampede contingent that helped honour Stu Hart with the Iron Mike Mazurki Award, and August 2003, when he was a part of the WrestleCon convention in Arlington, TX.