Booker has long-term plans as ‘T’ in TNA

Booker T is looking forward to playing a big role in TNA. And despite comments he’s made to the contrary, he’s expecting to be there for quite some time.

The six-time world heavyweight champion (whose real name is Booker Huffman) had been talking retirement not that long ago, but he sounded like someone wanting to add more chapters to his wrestling legacy as he addressed numerous subjects during a 25-minute conference call for his new employers Tuesday.

“When I was talking about retirement, it was all about the schedule I was working and how much I was on the road,” Huffman said. “With the TNA schedule, I’m looking forward to it picking up a little bit, to be honest. I’m not going to slow down right now, I’m going to roll until the wheels fall off.” 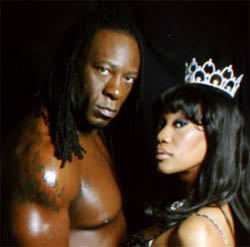 Released from his WWE contract in October, Huffman made his first TNA appearance less than a month later when he was unveiled as Sting’s mystery partner at the company’s Genesis pay-per-view. He acknowledged that his debut wasn’t much of a secret, perhaps tweaking the recent return of Chris Jericho when he said it “was a pretty easy code to crack.”

In Huffman’s mind, anticipation was more important than shock value.

“Everybody knew it was going to be me,” he said. “I mean, how many other guys were out there that have won every other title in every other organization? I really think it was something to let everybody savor the flavor for a sec.”

Now that he’s officially on board, Huffman finds himself working with a number of familiar faces like Jeff Jarrett, Sting, Kevin Nash and Scott Hall. While he said he had a good relationship with those former co-workers and writer Vince Russo, he claimed to be more excited to help younger performers like AJ Styles, Kaz and Bobby Roode reach their full potential.

Huffman knows a little about the teaching aspect of the business, having run his own wrestling school and PWA wrestling promotion for several years. He dismissed reports that he was dissatisfied with the WWE’s decision not to form an official developmental relationship with his fed, but he did express a desire to have it serve in that capacity with TNA.

“That’s my goal, to make TNA a better place to be in every aspect,” Huffman said. “I’m looking forward to getting a lot of those guys down to PWA, getting them down to the training facility and getting some real work done on psychology and a whole lot of things.”

He went on to explain that while he was confident of his ability to continue to deliver in the ring, his drive to help TNA succeed goes a lot deeper than merely wrestling. Huffman feels like he can serve in a variety of ways, offering his knowledge of the industry to aid the effort wherever he can.

“I watch the program and I see a lot of things that can be helped,” he said. “I want to be the first one to step in that position and say, ‘Hey guys, we need to do this.'”

That help may include the kind of behind-the-scenes role he played during the end of his run as King Booker in the WWE. Huffman said he got to sit in on production meetings for pay-per-views and Monday nights for two months, and even though he wasn’t happy with everything he saw, he appreciated the opportunity for what it was: an eye-opening experience.

And though he may be more vocal about the creative side of the product, he was quick to point out that stepping on toes or holding younger stars back is not part of his agenda.

“It’s going to take a team of us to get this together,” Huffman said. “First and foremost, the young guys in TNA, they have to know that I’m not there to take [their] spot. I’m there to make each and every one of them better, and that’s it.”

Asked about the possibility of a Harlem Heat reunion in a TNA environment that already features several experienced tag teams, Huffman explained that even though he and brother Stevie Ray were currently “at odds,” he never completely closes the door on that idea.

More than anything though, the man who once talked openly about walking away from the business appears to be re-energized by his fresh start.

“Right now I feel like I’m still a hot commodity,” he said. “I’m still one of the best talents out there in my estimation, so I just want to do it as long as I can.”