Vince Russo not so evil

With everything that’s been said about him and written about him by people both from within the wrestling world and without, maybe this interviewer’s first question for TNA booker Vince Russo should have been: “Where are your horns, spiked tail, and cloven hooves?” 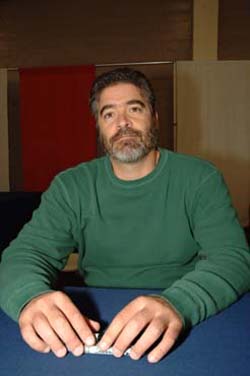 Vince Russo at the WrestleFanFest event in San Francisco. Photo by Mike Mastrandrea

It’s not like Russo hasn’t been demonized before. In fact, he’s been dealing with that sort of characterization for years now, ever since he was appointed the head writer for WWE back in the mid-’90s. Turning the cartoonish stylings of the company on its ear, Russo ushered in the Attitude era, spearheaded by edgy characters and controversial storylines.

“All we did,” he explained, “was bring the product up to speed. Before I started writing, I think the WWE — WWF back then — was really behind the times. We just brought it up to speed to make it relevant to society at that time.”

Some critics argue, however, that Russo’s concept wasn’t all that original, and he has been accused of copying many of the elements that were prevalent in ECW at the time. Russo disagrees with those allegations.

“I never even watched ECW (back then), to be honest. Paul Heyman and others may say that (I did), but that’s not really the truth. ”

“All I did is look at the talent we had, and kind of worked around their strengths. It all depends on the talent you’re working with. All guys are different. ‘Stone Cold’ Steve Austin is different from the Sandman, for example. A lot of it has to do with you have to work with”

Whatever the secret, it’s indisputable that wrestling’s popularity boom can be attributed to a lot of Russo’s efforts. Ultimately, the company’s ratings war with WCW required him to double and then redouble those efforts, and it wasn’t long before Russo found himself weary from the workload.

“I was burned out. I’m very goal-orientated, and I felt that there wasn’t really anything else to strive for. I felt we were the best that we could be, and I was ready for the next challenge.”

“Vince McMahon is very demanding,” he continued. “If you work for him, it’s 24-7, and I did that for five straight years until I really had nothing left in the tank, you know?”

In a move that sent ripples through the industry, Russo left WWE and headed south to WCW. There, he continued his “crash TV” style of booking, increasing the shock value to higher levels than ever. Something about the formula didn’t catch fire as it had in WWE, though, and it wasn’t long before the company started on a downward slide. To many, the nadir of this time was the world championship reign of Hollywood actor David Arquette, and that is an oft-cited argument of how sketchy booking decisions hurt the company. Others point the finger at a few key wrestlers who also had booking control, often using their positions to protect their own self-interests. Conspiracy theorists, legitimate journalists and wrestling pundits have debated for years as to what ultimately led to WCW’s demise; Russo has his theory as well.

That said, he acknowledges that the political environment certainly played its part in hampering his ability to succeed.

“All the politics involved really took the wind out of my sails. I’m not a political guy, and I didn’t want to get caught up in that game. (I wasn’t) able to do what they hired me to do. I had a plan, I had some goals and some ideas, and I never really got the opportunity to see them through.”

After WCW, Russo returned very briefly to WWE, before heading off to join the upstart NWA-TNA (now TNA Wrestling). Between 2002 and 2004, Russo would play a variety of roles in the company, writing, booking and playing on-screen characters. The early days of TNA brought with them a new sense of excitement.

“Just trying to keep the company alive,” he recalled. “Every week that we had a show was a victory, you know, just to survive from week to week.”

Russo left the company in late 2004, returning in the fall of 2006 and joining the creative team once again. The company is much different five years later, and Russo enjoys the opportunity to help build it along even further.

“Over the past five years, TNA has made some really great strides. All it took was time. You can’t build a company overnight, you can’t build stars or ratings overnight. It just really takes time. As long as everybody understands that and nobody’s pushing the panic button, I think it will continue to work out.”

Of course, where Russo goes, controversy, either well-founded or not, is bound to follow. Rumours that the TNA writing team had divided itself into factions and become embroiled in a backstage power struggle had started circulating in the weeks leading up to this interview, which was conducted at October’s Wrestle Fan Fest in San Francisco.

“I want to tell you it’s absolutely untrue. I write with Jeff Jarrett and Dutch Mantell. Jeff is a very close friend of mine. Dutch is about 20 years older than me, and is someone I really, really respect and learn from. There is no way that when you have so many creative guys, that you’re going to agree one hundred per cent of the time. But a lot of it has to do with friendship. Jeff is one of my best friends in the world — he’s like a brother to me — and that supersedes anything. Jeff, as you know, recently lost his wife. As close as he is, she was also so close to me. The only thing that’s important to me is helping my friend.”

That’s a completely opposite view one would think Russo would espouse, given the vilification that some have put him through in the past. However, those are the types of sentiments, and that is the kind of attitude, that Russo has embraced ever since he found religion in 2003.

“I didn’t find religion,” he clarified. “Religion found me — there’s a big difference. It changed my life, and I’m so much a better person because of it. A few years ago, yeah, you can talk about ‘factions’ and all that, and I might have been in it. But there are so many more important things in life than, you know, who’s going over and who’s the babyface. Those other things are the things I try to concentrate on now.”

This coming from the man who has been referred to as a ‘walking cancer’? The man who’s been called ‘the Antichrist of sports entertainment’? I mean, what about the horns, and the tail and the hooves?

“I’ve always been true to myself,” he said, shrugging away those labels. “I’ve always been honest, I’ve never lied to anybody. There has never been a day in the wrestling business where I haven’t been able to look myself in the mirror. To me as a man, and as a human being, that was always the most important thing. The show was always just the show; it’s not the heart, it’s not who you really are.”