Be it Martin’s Sports Town Grill or Hutzler’s Steakhouse, just mentioning these names to a Hamilton wrestler or football player of a certain vintage, and it evokes memories. There’s the huge steaks, the stories by the oldtimers, and the beer conspicuously served in milkshake containers.

Run by sometime wrestler Martin Hutzler, who died in 1966, the restaurant was a fixture for many years. It’s still there, though no longer run by the family. 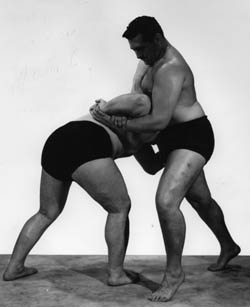 With Hamilton having sent so many massive men to the squared circle — it was commonly referred to as “The Factory” in the wrestling business — it’s no surprise that a place that catered to their massive appetites still rings true.

“My brother and I went to his steakhouse quite frequently,” said Mike Kelly (William Arko) of the Kelly Twins. “We’d meet guys way from the past that we didn’t even know. He had one of the best steakhouses in the area.”

Reginald Love (Johnny Evans) frequented Hutzler’s too. “When I was just breaking in, all the oldtimers would go there. It was a big place to go. He’d give you a milkshake, but in the milkshake can — it was beer,” said Love. If one wanted harder stuff, like Crown Royal Whisky, or his prized tequila, a trip to Hutzler’s office was necessary. “He said to me one time, ‘My waitresses here think you’re a real cute guy. Why don’t we get into a fight in the restaurant?’ I said, ‘Are you kidding?’ He wanted to make himself a heel! … He was dead serious. I should have said, ‘What, do I get free food forever?'”

Born in Germany of Jewish descent, Hutlzer’s parents got out of Germany in the late 1930s before the war. Hutzler turned to pro wrestling about 1945, and established the restaurant in 1948 on the corner of Barton and Oak Streets. In 1953, it moved down the street to where it sits today, between Glendale and Cavell. After his death in 1966, Martin’s widow, Ruth, ran the restaurant and re-married. (She died a decade ago.) After 20 years in the Hutzler family, Sam Sutter bought the restaurant and has been running Martin’s Steakhouse ever since.

Hutzler would often capitalize on his grappling and pigskin friendships. “Every hour famous cashiers will take over at the cash register to assure complete satisfaction,” cries an ad in the Hamilton Spectator newspaper, listing footballers like Bernie Faloney and Garney Henley, alongside wrestlers like Billy Red Lyons, Jim Hady and Eric Froelich.

Paul Gibson both worked for Hutzler in the restaurant and wrestled with him on the small southern Ontario circuit run by Joe Maich where Gibson was Farmer Elmer for a very brief career. Gibson was manager of the restaurant when Hutzler was away wrestling.

“Martin catered to football players, wrestlers and their fans,” explained Gibson. “Martin was always considerate of his staff, and he treated all of us so well. Although he was my employer he was also a very good friend. At the same time he didn’t treat me any better than anyone else. He was truly a remarkable person.”

As a pro wrestler, Hutzler never made it big. Content to stay local, he fought for the fun and competition rather than the glory.

“He loved the wrestling, really in love with it. He used to try to promote stuff. He never did anything big at all. But that’s not taking away from the fact that he could wrestle,” said Love.

George Scott said that Hutzler was a good friend and, “one of the greatest guys around at the time.”

Early on in both of their careers, they faced off at the YMCA. “He beat the crap out of me but could not pin me,” said Scott, explaining that Hutzler tried all the dirty tricks like hair pulling and eye gouging. Two years later, Scott saw Hutzler after his first pro match and Hutzler didn’t recognize him. “He and I became the best of friends after that.” 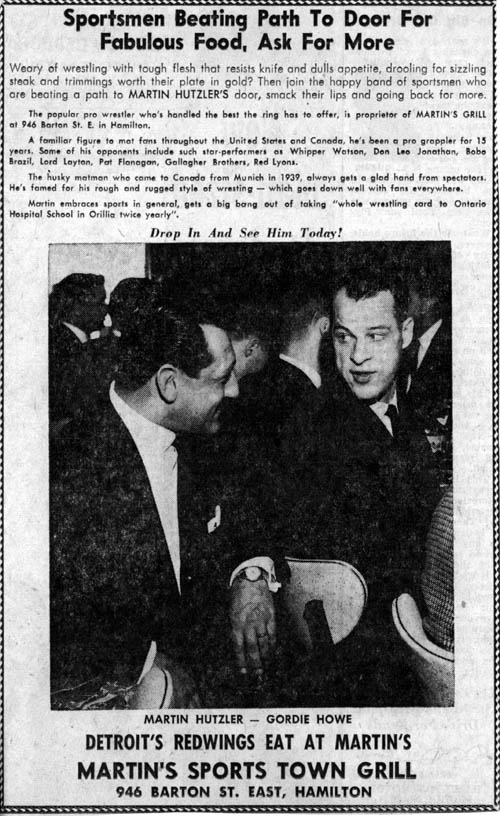 The late Frank “Scotty” Thompson shared his memories of Hutzler in a 1998 edition of Whatever Happened To…?. “Mark (Martin) was a hard worker. When you worked with Mark, you worked. I thought I was in terrific shape. After two minutes, my tongue was laying out on the mat. I thought I was gonna get a break when he threw me out of the ring, but he came out and threw me back in to keep the match going. I hated his guts and didn’t even know him. He was a real swagger, smart-ass type. But we became very good friends. We went to a draw that night. He carried me for the full twenty minutes. It got me started.”

Besides working under his own name, Hutzler also teamed with Joe DiTomasso under masks as the Masked Twins. On one occasion, Gibson teamed with Hutzler under masks as the Masked Twins. He recalled inciting the fans to near riot, and the heels were followed to the dressing room by a lynch mob. In the dressing room, Hutzler was prepared for them. “All at once someone opened the door from inside. The angry fans were hesitant to enter, as they looked in astonishment, to see Martin standing there hugging ‘Duke,’ his 200-pound Great Dane dog. Martin was crying and saying, ‘Duke, you’re the only friend I’ve got. Everyone hates me. Please Duke, don’t let them kill me. I know you won’t.’ Duke was standing on his hind feet with both paws on Martin’s shoulders. He was taller by far than Martin and stood there licking Martin’s face. No one dared to enter.”

Reggie Love recalled a sit-up battle between himself and the older Hutzler. “He once did a thousand sit-ups. I did 500 and my ass had blisters, so I packed that in…. He did a thousand of them, but he had baby fat all over his body; One of those guys that you’d always see muscled, but boy, you couldn’t blow him up. He had wind.”

Martin and Ruth Hutzler had two children, Mark and Shelley.

Shelley Page only has faint memories of her father, as he died when she was just seven years old. “I remember having parties and stuff at the house. I remember being just a little girl and there would just be wrestlers everywhere, on the front lawn, everywhere. I remember being at the restaurant when I was young … Haystack Calhoun was working,” she said, adding knowing the midget wrestlers stands out as well.

Unfortunately, many of her memories of her father are from when he was ill. “I just remember him being sick a lot,” she said. “I remember my mom going through a lot, because, I guess, eventually it affected his mind and everything too.”

His legacy lives on in more ways than just the restaurant.

“My son is 22, and I always tell him that he’s very much like him,” said Shelley Page. “I say that he would be very proud of him because he liked someone who has his own mind and isn’t afraid to fight and stand up for himself. My son’s a lot like that.”