History of TNA: Year 1 a DVD of self-examination

In the business world, it is not often a company will admit mistakes to the public that nearly led to its demise let alone produce and market a DVD that details the experience; however, The History of TNA: Year 1 does just that.

The main menu, complete with the original TNA logo, consists of three categories: The Story, The Matches and Bonus materials. 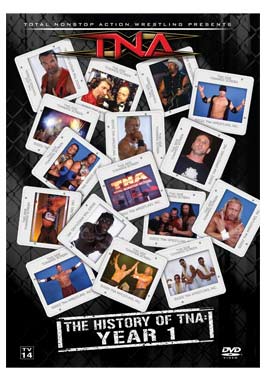 The Story begins with the final audio check by Mike Tenay from TNA’s first pay-per-view held on June 19, 2002 in Huntsville, Alabama. Captions also explain to viewers the nature of the dialogue between Tenay and Don West in regards to last-minute format changes as the ring crew scrambled to repair a cable underneath the ring, which was broken in a dark match just prior to airtime. Essentially, this sets the tone for the documentary by foreshadowing the obstacles TNA would face.

Jeff Jarrett, Jeremy Borash and Bob Ryder start off by describing life after WCW and the origins of TNA. A few minutes into the DVD, Tenay grabbed my attention by stating, “Wow, weekly pay-per-view concept was one of those situations that had never been tried before. Was I optimistic about it? Hardly. But was it a means to an end? Absolutely. When you didn’t have that TV contract on a network, on a cable station, you had no opportunity to promote your pay-per-view shows. But without having the ability to have that contract, you had no other option. So, what TNA decided to do was to go on a week by week basis where you would go from one pay-per-view to the other and use that week’s show as your promotional tool to promote the next week’s show. So, optimistic about it? Not really. It was the only option at the time, and it proved really to be the smartest move ever.”

Tenay would be the first of many to explain his initial doubts in the success of the company, which is what makes this DVD so intriguing. Instead of glossing over both the external and internal doubts regarding TNA’s success ratio during their first year, the documentary tackles the subject head on.

Highlights from the early shows provide nice segues between chapters such as country music star Toby Keith’s appearance at the first pay-per-view and Ron “The Truth” Killings winning the NWA World Heavyweight Championship.

Proof that Ryan was around those early TNA shows.

The only real drawback to the documentary is that it only contains interviews with a select group of people employed with the company. Although they are mentioned in passing, I would had like to have seen interviews with Jerry Jarrett, Bob Carter, Vince Russo, Ed Ferrara, Bert Prentice, among many others who played pivotal roles during the first year.

The four matches from the weekly pay-per-views within The Matches section include:

Bonus materials include various cameo appearances during the first year, the original TV commercial that aired in the Nashville market, Chris Harris and James Storm’s tryout for TNA match during a USA Championship Wrestling event, and a Curt Hennig tribute piece.

Overall, The History of TNA: Year 1 is a must have for fans wanting to know about TNA’s past; however, I recommend those same fans also pick up a copy of the book The Story of the Development of the NWATNA by Jerry Jarrett for a more detailed account of the early days of the company.

Ryan Nation vividly remembers his Wednesday trips from Cookeville, Tennessee to Music City USA to record interviews at the Asylum for his college radio show. He also wonders if TNA will ever hold another show at the Asylum for old time’s sake.