A young drama student gives up everything in his quest to perform on the grandest stage of all — the wrestling ring. That’s the premise of Headlocked, a new comic book series that follows the protagonist’s journey towards superstardom. 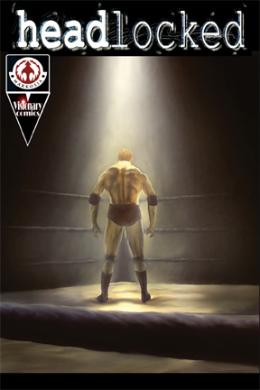 Headlocked – a comic by Michael Kingston.

Now on store shelves, Headlocked is the brainchild of Michael Kingston, first-time author, and wrestling fan. SLAM! Wrestling sat down with Kingston who was showcasing the book at last month’s Wrestle Fan Fest in San Francisco.

“The book,” he explained, “is about (Mike Hartmann) who’s a college theatre major. One night, he goes to a wrestling show. At first, he has a kind of snobby attitude towards it, but once he gets there, he sees the performance art aspect to wrestling, and that stirs up something inside of him. He gets caught up in it, and he decides that’s what he wants to do.”

Bitten by the wrestling bug, Hartmann impulsively quits school and sets off to chase his dream.

“The problem,” said Kingston, “is that he has no idea about the world he’s trying to get into. He’s only been to the one show. So he has to find out things one step at a time. Ultimately, the story’s about him working his way up from the bottom, learning the business as he goes.

The first issue, subtitled “The Art Of,” shows Hartmann shortly after making his decision, explaining to his less-than-understanding family and friends his rationale for dropping out of school to join the proverbial circus. Undaunted by their disappointment, Hartmann, a wide-eyed innocent who knows nothing of the workings of the business, does what he can to educate himself. After meeting a star from the World Federation of Wrestling, modeled after the real-life WWE as the world’s leading sports entertainment company, he is more determined than ever to get into the business, and plans how he can make it to the big leagues some day.

Future issues, Kingston divulged, will feature stories about Hartmann in training, wrestling on the indy circuit, and basically learning about the crazy world of wrestling from within. Though Kingston has no wrestling experience himself to draw upon, he will try to make the story as realistic a portrayal as possible of someone trying to break into the game today.

“I’ve been a wrestling fan forever, since the first WrestleMania,” he said. “I wanted the book to show how much work it takes to make it as a professional wrestler.”

The October 31st launch was preceded by a special preview edition that was only being sold at conventions such as the one in San Francisco. That issue featured some of the backstory of Hartmann, but also included a profile on the fictional WFW league that Hartmann ultimately wants to join and its characters, all of whom appear to be heavily based on real-life stars circa 1995. For example, the roster includes a clown and an accountant, and there’s even a character who appears to be a walking deadman who uses a chokeslam finisher. Hartmann does a pretty good job creating this fictional roster, coming up with back stories and distinct personalities for each of the wrestlers, assigning them different styles and finishers. And while some of them may be somewhat formulaic, there’s a good chance that their familiarity will attract wrestling fans who might not otherwise read comic books.

Although the comic isn’t necessarily geared exclusively to wrestling fans. Indeed, some comic fans may also enjoy the writing and the story without having any knowledge about the sport.

“That’s one thing I tried to do,” said Kingston, addressing that very point, “is try to make the book as accessible as possible to even people who don’t watch wrestling. Hartmann is just a fan who doesn’t know much about the business. I want people with limited knowledge to enjoy the series as well.”