For wrestling fans, Atlanta, Georgia boasts some of the sport’s most important buildings; a visit to the OMNI, for example, is a must for any wrestling connoisseur. Though Abdullah the Butcher’s House of Ribs and Chinese Food doesn’t necessarily have the same historical significance, there’s certainly enough on the to satisfy the appetite of any fan.

The Atlanta restaurant is one of two owned by the legendary “Madman from Sudan,” the other being in Japan. The rustic-looking building stands in an urban area of town, described by our cab driver as being “not the best part of town, but not the worst either,” a short drive away from the airport. 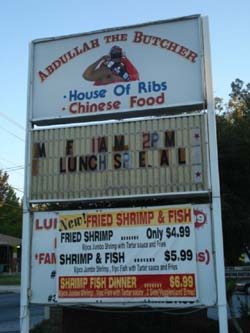 No trip to Atlanta is complete without a trip to Abdullah the Butcher House of Ribs and Chinese Food. Photos by Bob Kapur

The restaurant itself is rather old-school. A large sign in the parking lot displays the day’s specials in black and red (and some missing) lettering. There’s a small outside dining area out front on the deck. The dining furniture is old and made of wood covered with a deep crimson vinyl, the floors are checkerboard linoleum. A gumball machine and a small table holding menus stand in the corner. The scent in the air is thick with deep smoky barbeque and hints of soy sauce. In fact, one wouldn’t think the restaurant different from hundreds of others, given the general normalcy of the place.

Until, that is, you look at the walls.

There, one can find an entire pictorial of wrestling history in the form of hundreds of photographs of wrestling’s past, present and future legends. It’s an incredible sight, as nearly the entire wallspace of the restaurant is plastered with photos, most of them signed with a personal note to Abby, praising the restaurant or just wishing him well. They are accompanied by several pictures of Abdullah himself, including many from his life before he earned a reputation as a hardcore icon. The piece de resistance is a large portrait of Abdullah which hangs prominently above the counter. Somewhat surprisingly, there is no merchandise available at the restaurant, which is too bad, since I would have liked to have bought a t-shirt or some other memorabilia — instead, a stolen menu (there are stacks of them, all photocopies of a signed original) would have to suffice. Would that I could have stolen one of Abby’s signature forks as well, but alas, only plastic utensils are provided.

But that all said, no matter how interesting it may be to just walk around and look at the walls, Abdullah’s is first and foremost a restaurant, and as such, where it must really deliver the goods is in terms of the quality of the food.

In that regard, the restaurant deserves championship honours. The food is hands-down delicious. I ordered the rib platter, while my buddy Doug Campbell ordered the quarter-chicken, and the cab driver (we asked him to join us, since we didn’t feel safe hanging around in that area afterwards to wait until he picked us up) opted to go for the shrimp dinner. Each dish was served with two of the wide side dish selections, and a corn muffin and a drink, all for about $10-$12 apiece. 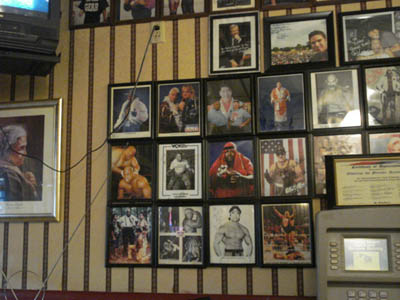 The chicken and ribs are smoked in a special cooker in the back of the restaurant, and both meats had a smell and taste not unlike an Indian tandoor. Both were cooked to perfection with the ribs falling from the bone and the chicken moist and tender. Doug agreed with this assessment, and also put over the tangy sauce that came with the chicken, finding it to be both spicy and sweet and an excellent complement to the chicken. For his part, our cabbie dove into the shrimp with enthusiasm, saying they were “excellent … crispy coating, not oily, and they taste really good.” 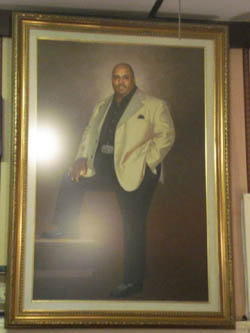 Portions were more than sufficient — one could say “Abdullah-sized” — and none of us could completely finish the meal, with me tapping out particularly early, much to the amusement of the cabbie. Completely full, none of us even inquired about dessert. Given the quality of the meal, one might assume their sweeter offerings would have been at the same caliber, but my preference would rather be to try them again the next time I go.

And safe to say that I will ask for a rematch one day. Abdullah the Butcher’s House of Ribs and Chinese Food is definitely worth going to if you’re in the Atlanta area. Like the man behind the name, the restaurant boasts a unique style that’s sure to thrill any hardcore enthusiast … or in this case, diner.

“Bloodthirsty” Bob Kapur is proud that, even in the context of a food review, he refrained from writing that he likes pie. Though in hindsight that might have been funny. Either way, e-mail him at [email protected].