Jimmy Rave in TNA for the long haul

For Atlanta-born Jimmy Rave, appearing at TNA Wrestling’s Bound for Glory pay-per-view, which took place in that city a few weeks ago, was a definite career highlight. He’s hoping that many more will follow.

The 24-year old Rave (real name James Guffey) has certainly had more than his fair share of highlights in his young career, in particular during his recent stint in Ring of Honor, for whom he wrestled for the last four years before signing with TNA. Over time, Rave became one of the company’s major villains, feuding with the likes of A.J. Styles, Bryan Danielson, and Davey Richards. It appeared that Rave was going to be a cornerstone of the company, until it was announced in August that he had signed a contract with TNA. 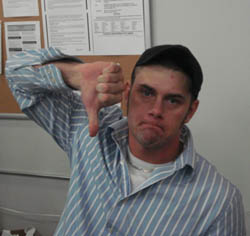 Jimmy Rave at the Bound For Glory fan fest. Photo by Bob Kapur

Though Rave wouldn’t divulge to SLAM! Wrestling exactly what prompted the move, he did take the opportunity to clear up some of the rumours surrounding the decision.

“There was a little bit of a disagreement,” he said. “Actually, that’s something you can help me clear up. There are a lot of websites that are saying I left Ring of Honor because they weren’t paying my doctor bills (Rave left shortly after rupturing his eardrum, which required surgery). That’s all B.S. That’s not why I left.” Asked for clarification, he replied. “They weren’t paying (the bills), but that’s not why I left.”

In any event, Rave isn’t looking back on the decision with any regrets, and prefers to focus on his sights on his future in TNA Wrestling. He made his return — Rave wrestled for TNA on occasion in the early years — at September’s No Surrender show in a tag team gauntlet match, teaming with Lance Hoyt and managed by Christy Hemme. At BFG, Rave was involved in the 16-man marathon match (reverse battle royal, battle royal, singles), but failed to advance to the second round. That’s fine, he said, as he realizes that he is still a somewhat unknown commodity to many of TNA’s fans.

“Right now, it’s just one of those things where they’re trying to introduce me to the fans. The first time I was here, I was only here briefly and was just able to introduce myself. This time, I’m in it for the long haul.”

For now, though, Rave is content to focus on the short term, or in the case of wrestling in front of his hometown crowd, the immediate term.