Wrestling fans will descend on San Francisco next weekend for WrestleFanFest 2007, a mammoth wrestling convention. Between hobnobbing with a who’s who of talent, attending live cards — including one that will be broadcast on pay-per-view — and meeting thousands of other wrestling fans, attendees should be in store for what’s being billed as the ultimate fan experience.

“I really believe that will be the case,” said Chris Cramer, the chief organizer of the event who managed to find time during these last few days of planning to discuss the event with SLAM! Wrestling. “We’ve done everything we can do to put on a weekend that people will walk away from and say it was a great experience.” 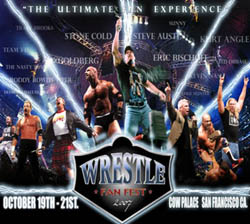 Anything less certainly won’t be for lack of effort on Cramer’s part. He and his team of around 50 people have been working since January to organize the weekend, which kicks off next Thursday afternoon and is jam-packed with events, meet and greets, and wrestling cards straight through to Sunday night. The schedule for an attendee even sounds overwhelming on paper, much less organizing the full weekend. Fortunately, Cramer is a veteran sports promoter and has been able to draw on a decade of experience in organizing these types of affairs.

“Yeah, I started really young. I began doing sports promotion when I was 21. I started with the Oakland Raiders, and then it rolled into doing (events) in the mixed martial arts world.” The idea of doing a wrestling convention was sparked from one of Cramer’s personal interests. “I used to be an avid Hot Wheels collector,” he explained, “and I thought to myself that Hot Wheels (collectors) have their own convention, comic books have their convention, action figures have theirs, but nobody has ever done a real convention for pro wrestling. There were a lot of smaller ones but nobody had any real experience doing it, they would just rent a small room at a hotel. But there was nothing like the big ones that other hobbies had.”

With the idea to put on a major convention, the next challenge came in finding wrestlers to participate. “I started looking online to see who was still involved in the business,” he said. “I knew that fans would want to see a mix of legendary talent and some current talent and everybody in between. The first call we made was Diamond Dallas Page. We negotiated with him and got him, and it snowballed from there.”

The roster now boasts 100 or so stars, including some of the biggest of all time, including Kurt Angle, Roddy Piper, the Great Muta (“I liked getting Muta there,” said Cramer proudly, “because he’s someone that people don’t normally see at these types of things.”), “Stone Cold” Steve Austin, and Bill Goldberg, the latter of which Cramer said was his biggest challenge. “It took nearly five months before that deal was finally struck.” Other superstars appearing include the Outsiders (Kevin Nash and Scott Hall), Ted DiBiase (who will reunite with his former valet Virgil for an autograph session), Jimmy Snuka, the One Man Gang, Sunny, Francine, Eric Bischoff, and countless others.

In addition, the weekend features a number of live cards, including a Ring of Honor show — “their first foray in California, and I can’t think of a better way for them to do it … I’m so happy they’re involved”, and the Malice in the Palace event. That card, taking place on Saturday night, features some huge matches featuring some of wrestling’s biggest names. As a sample: The Outsiders square off against Sid Vicious and a mystery partner; there will be a hardcore 7-way match involving Steve Corino, Al Snow, Sandman, Kevin Sullivan and other ECW veterans; a 4-team legends match includes a reunited Brutus Beefcake and Greg Valentine, Koko B. Ware, Dr. Death Steve Williams, and Mil Mascaras among others; and the Ultimo Dragon squares off against the Great Muta.

The entire card, and indeed the full schedule for the weekend can be found at the company’s website — www.wrestlefanfest.com — which Cramer says was a key vehicle in advertising and promoting the event.

“It started off as a real grassroots website, and it’s since blossomed into something that I think people want to visit on a daily basis. It’s been a great way to communicate the schedule to the fans and update them with any news, any new names (recent WWE departees Cryme Tyme were the latest names announced just last week), and keeping them informed. We want to make sure that everybody knows exactly what to expect when they get here. That’s important when running these types of events,” he continued. “To do everything you can do so that people know what they’re getting and know that they’re getting what they paid for.

One of those things is the opportunity to participate in in-room trading sessions, which allows attendees to buy, sell, and trade collectibles and paraphernalia right out of their own hotel rooms.

“It’s a unique thing for a wrestling convention,” acknowledged Cramer, “but I’ve seen it done at the Hot Wheels conventions and it’s one of the great features of those shows. I’ve seen people with very few specialized items, while there are others who have pretty much opened up a whole store right out of their room. Every fan, I’m sure, has at least one item that they want to show off or trade or sell. This is a really rare chance for people to get to do that along with so many other wrestling fans.”

As to how many wrestling fans that may be, Cramer believes that up to 20,000 people is a realistic estimate. “We’ve sold almost that in pre-sold tickets, and California is the number-one market for walk-up business, so that’s not an unreachable number. About 20% of those he estimates will be coming in from outside the U.S. “We’ve been tracking that, and there are a lot of people coming in for the show. People are coming in from Canada, Mexico, Japan… the list goes on. What’s more important than that, though, is that when they go back home, no matter where that is, that they felt that they got their money’s worth.

“Bloodthirsty” Bob Kapur and SLAM! Wrestling photographer Mike Mastrandrea will be attending Wrestle Fan Fest 2007, and will be providing news and photos from the event. Stay tuned to SLAM! Wrestling next weekend.