Angle gets stung at Bound For Glory

While the NFL may have the Super Bowl, TNA made it clear that their flagship event is their annual Bound For Glory extravaganza. TNA also made it well known that for this special event there was going to be an equally special main event, pitting two superstars against one another, as Kurt Angle and Sting did battle for the TNA Heavyweight Championship.

Going into Bound For Glory, TNA did several pieces documenting the rich histories of both Kurt Angle and Sting and what their history had to tell about Atlanta, GA. For Sting, it was over a decade of his wrestling career that he spent in Hotlanta, while Kurt Angle had the odds on advantage, having won Olympic Gold in Atlanta in 1996. Both stars were eager to impress and they did just that.

The match started off with Sting getting inside the mind of Angle and sending him to the mat and to the floor. Angle waited patiently and struck when the opportunity presented itself. After some back and forth action, Angle was able to lock in an Ankle Lock, only to be reversed into a Scorpion Deathlock by Sting. Karen Angle came out and caused Sting to lose focus. In turn the referee lost focus as security came out to escort Karen to the back.

Back in the ring, Kevin Nash made an appearance, despite vowing not to, and clotheslined Sting. Angle then hit an Angle Slam, but Rudy Charles was still on the outside and was late for the pin, allowing Sting to kick out at two. Some more back and forth action ensued, with Angle getting off a 450 Splash and getting his Angle Lock reversed into Nash. A series of reversals led to ref Rudy Charles getting taken out by an Angle Clothesline. Sting then hit a Scorpion Deathdrop, but Charles was out.

Referee Andrew Thomas came down and at the count of two was pulled out by Nash. Nash leveled Thomas and then got in the ring to beat on Sting. Sting fired back on both of them, but was lowblowed by Angle. Angle then attempted to use Sting’s bat on him, but Sting blocked it. Sting was busted open in the process and proceeded to beat on Angle with the bat. He then crotched Nash on the top rope and whacked him with the bat as well. A Scorpion Deathdrop to a bloody Angle was enough to get the three count and crown Sting the new TNA Heavyweight Champion at Bound For Glory.

The intro package was shown as Mike Tenay and Don West did their usual hype.

Winners Via Grabbing The X at 12:00 min – LAX (Homicide and Hernandez)

Kurt Angle, Karen Angle and Kevin Nash were all shown arriving separately. Mike Tenay and Don West then talked about how amazing Ultimate X was and sent it to he back where Crystal was with the Christian Coalition. Crystal asked Tomko about his upcoming tag team title match, but he interrupted by Christian Cage. Cage ran down Samoa Joe and walked off. AJ Styles was hilarious, saying how he was glad to be back in Georgia and did some shoutouts. Tomko told Styles he better not let him down.

Fight For The Right Battle Royal – Jimmy Rave vs. Lance Hoyt vs. BG James vs. Kip James vs. Havoc vs. Kaz vs. Shark Boy vs. Alex Shelley vs. Chris Sabin vs. Petey Williams vs. Sonjay Dutt vs. James Storm vs. Chris Harris vs. Robert Roode vs. Eric Young vs. Junior Fatu

This started out as a reverse battle royal, with the first eight stars getting into the ring advancing to the tournament for the number one contender slot to the TNA Heavyweight Championship. It would then turn into a Battle Royal to determine the seeds, with the final two having a one fall match to determine the number one seed. The final two turned out to be Eric Young and Robert Roode, with Young scoring the upset victory once again. Some cool stuff including a Flux Capacitator by Kaz on Roode to enter the Battle Royal and a double stink face on Young and Lance Hoyt. Overall, it was decent.

A package was then shown for AJ Styles and Tomko vs. Team Pacman. Crystal then interviewed Team Pacman who said that since the NFL wouldn’t let Pacman compete, they brought in Consequences Creed. After Team Pacman was done, Kurt and Karen Angle were shown arguing in the hallway. Karen then told Kurt that she was going to ask Kevin Nash for help.

Consequences Creed actually meshed really well with Styles and Tomko and did well as Killings’ partner. Good back and forth match, with Jones making it rain and distracting Earl Hebner, causing Hebner to be late in counting Killings’ cover, this allowed Styles and Tomko to gather their bearings and double team Killings and get the win.

In the back, Jeremy Borash was with Karen Angle who went to Kevin Nash and told him that she had to help out because Kurt Angle was their meal ticket as the champion. Nash then decided to step in and help. A package was then shown for Jay Lethal vs. Christopher Daniels.

Prior to the match getting underway, Lethal did the “Ooooo Yeah.” This was a pretty good match with lots of near falls and close calls. After missing an elbow drop, Daniels almost got the win, but instead Lethal fired back with a second rope Lethal Combination for the victory.

In the back, Crystal was with the Steiners, who made it a point to say they were going to beat Team 3D’s “fat asses.” Yeah they said it enough to where it had to be specifically mentioned. A package was then shown highlighting their feud and what led to the two out of three tables encounter.

This was pretty much a brawl throughout, with Team 3D striking first with a 3D through the first table on Rick Steiner. The Steiners came back, with Scott hitting a super frankensteiner on Brother Ray through the second table. Tied one to one, Scott Steiner was placed on a table and it broke, however, since he wasn’t put through it, it didn’t count. Team 3D grabbed chairs and were about to use them when the Motor City Machine Guns came out and provided a distraction, allowing The Steiners to come back and hit the Doomsday Bulldog and Brother Devon went through the third and final table.

Winners via Two Tables To One at 12:45 min – The Steiners (Rick and Scott Steiner)

Backstage, Jeremy Borash was with Angel Williams, ODB, Talia Madison and Shelly Martinez. ODB grabbed the mic and ran down Williams, Madison and Martinez. The Knockouts argued as JB tried to interview them. With JB left behind, The Awesome Kong came up to him and he ran away. A package was then shown hyping the Knockouts Gauntlet to crown the first ever TNA Knockouts Champion.

Match Six – Gauntlet to Crown the First Ever TNA Knockouts Champion – Gail Kim vs. Christy Hemme vs. The Awesome Kong vs. Talia Madison vs. Shelly Martinez vs. Ms. Brooks vs. Angel Williams vs. Roxxi Laveaux vs. Jackie Moore vs. ODB

This was almost the same as the Fight For The Right, however, this started off as a Battle Royal and then the last two Knockouts did battle in a regular match. Christy Hemme wasn’t eliminated in this match via being thrown over the top rope; after getting dominated by Kong, she rolled to the floor and medics came out and brought her to the back. The final two participants were Laveaux and Kim. These two knockouts were impressive, with Kim hitting the Kryptonite Krunch to get the win.

In the back, Jeremy Borash and Kevin Nash approached Kurt Angle and tried to reason with him, by Angle wanted nothing to do with it. He called Nash out and totally disrespected him, leading to Nash throwing a fit.

This was a great match. Joe came out with his tribal dancers. Morgan got involved as Cage tried to run away and Morgan didn’t allow it. The end came when Cage tried to choke out Joe, who fought back, hit an enzeguri, a Muscle Buster and topped it all off with a Kokina Clutch for the submission win.

In the back, Jeremy Borash and Kevin Nash found Sting. Nash said that he was protecting Kurt Angle because that was the closest he was going to get to being in the Main Event again. Sting said that it was game over for Angle and Nash. A package was then shown for the Monsters Ball.

Lots of crazy stuff in this one. Raven speared himself through a shopping cart, Rhino Gored himself off the stage and Raven dropped an elbow on Abyss off the bleachers to the concrete floor. Black Reign was busted open and taken out of the equation via a Gore. Raven broke out the thumbtacks, as James Mitchell came down with a bag of broken glass and added it to the mix. Raven tried to DDT Abyss onto the mix, but was reversed into a Black Hole Slam for the win.

A Tale of the Tape was then shown for the Main Event as well as package to hype it. 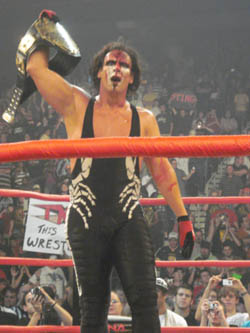