As of the late 1960s, Rey Urbano had been wrestling for about 15 years, happily earning the wrath of fans as the villainous Tokyo Tom, when real life suddenly intervened.

After he couldn’t shake an illness, Urbano, a Filipino, checked in with a physician following a run in Texas. The diagnosis was more alarming than anything he’d encountered in and out of the ring — even a stabbing at the Hamilton, Ont., municipal pool. He had a brain tumor.

“It was then that my doctor notified me that I had a brain tumor,” he said in an interview with California reporter Demas Lamas in 1971. “They thought I wouldn’t come out of it … I owe my life to my past history of physical conditioning — that’s what pulled me through.” 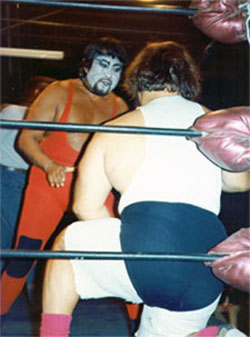 Fortunately, surgery revealed that the mass was benign. But doctors recommended that Urbano step aside from the sport, and he worked as a recreation supervisor in California for about three years before stepping back into the ring in the 1970s as the original Great Kabooki.

So it’s no surprise that the well-spoken matman took pleasure in that impressive comeback. Upon his return to wrestling at a 1971 benefit show, “. . . there’s much satisfaction knowing I can get back in the ring,” said Urbano, who continued his zest for life for 36 more years before he died Tuesday, October 16, 2007, at a nursing home in Las Vegas. He was 78.

A son of a Manila businessman, Reynaldo Urbano was a talented athlete as a teenager, learning judo as a youngster and eventually playing football for San Francisco State College, where he said he wrestled on the side only to keep in shape for the gridiron. The 1948 team, led by future Hall of Famer Ollie Matson, won a mythical national junior college championship.

He debuted in 1951, working under his real name in places like Chicago, California and Albuquerque. Paying his dues, he was promoted on one Indian reservation as “Kickapoo Rey,” he told sportswriter Hal Totten. “I thought the promoter was kidding, but when I arrived I noticed a big poster listing me as an Indian from Oklahoma. So when a group of reservation Indians spotted me and said, ‘There’s Kickapoo Rey,’ I simply raised my hand and said ‘How!'”

With some luscious hyperbole, the Ogden Standard-Examiner in Utah declared shortly after his debut: “Rey Urbano came here recently from the Philippines and has impressed with his ability under all kinds of fire. He honors his religious belief by a respectful gesture before leaving his corner. Then he battles with an intense fury. The Islander uses the side of his hand in a cutting manner not unlike the chopping knife he used at home in the sugar cane fields. It is both legal and effective.”

After about five years as a fan favorite, Urbano said he saw that the promise of big bucks rested more with bad guys, so he switched his countenance to that of the evil Far Easterner that was a staple of post-World War II wrestling. “I realized that pats on the back weren’t paying my bills,” he said. Urbano worked in California in the late 1950s before officially taking on the Tokyo Tom name in the 1960s.

He also worked as Taro Sakuro and won the Southern junior heavyweight title and one-half of the U.S. tag team title in the Tennessee territory in 1962. The following year saw him team with Sputnik Monroe in Texas against the likes of Dory Funk Jr. and Wahoo McDaniel, and he was a regular in the Amarillo, Texas, promotion in the mid-1960s.

The change of persona “made a tremendous increase in my financial status and made me a great demand throughout the world,” acknowledged Urbano, who estimated he was pulling in $1,000 a week at in his heyday. But his turn to the dark side was accompanied with peril, as well. 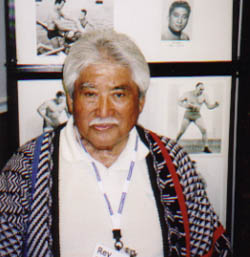 “One night, a woman took off one of her spiked-heel shoes and hit me so hard on top of the foot with the sharp heel it drew blood,” he explained to Totten. “The pain was terrible, but I had an image as one who could not feel an injury to my feet, so I simply bowed and smiled.”

During his recovery from surgery, Urbano finished off his college degree at Cal State-Fullerton and landed the recreation post in Port Hueneme. When he found he could handle the physical demands of wrestling, he decided to tour the Midwest in September 1972. “I saw friends I hadn’t seen for years on this trip,” he said to the Oxnard, Calif. Press-Courier upon his return. “It was great.”

Bitten by the bug, he stepped aside from his recreation job in December 1972. In a clear departure from kayfabe, he publicly disclosed that he would be appearing henceforth as The Great Kabooki, with chalk-white makeup and black eyeliner to accentuate his foreign appearance. Kabooki sported a Japanese-style robe and a full compliment of ritualistic salt to toss in the arena — or in his opponents’ eyes. He preceded The Great Kabuki, a Japanese star managed by Gary Hart.

Urbano started working for The Sheik’s Detroit promotion in 1973 and took time to attend some graduate classes at Michigan State — without the get-up, of course, the tedious application of which required him to get to the arena half-an-hour before anyone else. His work in and around the Great Lakes represented the last major run of his career, though he also turned in a few stints for Angelo Poffo’s ICW promotion in the early 1980s.

“He quietly over the years entertained fans and became a friend to all he came in contact with. With a low key shy personality along with a wry sense of humor, he became a ripe target for a number of unsuspecting pranks yet he was one of the most beloved members of the wrestling fraternity,” wrote “Supermouth” Dave Drason (Burzynski), a fixture in the Detroit promotion, in a recent issue of Wrestling Revue.

“When I changed hats to become the bad guy, it became quite an enjoyment . . . I accepted the fans,” Urbano said.

A funeral is scheduled for Monday, October 22 at Palm Mortuary Eastern in Las Vegas, with a graveside service to follow at Southern Nevada Veterans Cemetery.