By MIKE JENKINSON – For SlamWrestling.net

I approached the new book, Benoit, with trepidation for a number of reasons. 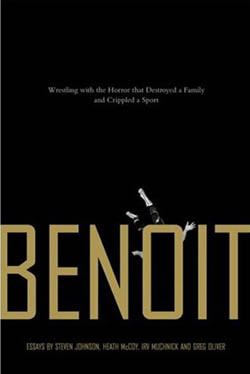 For starters, I’m leery of “rush job” books that can be accused — rightly or wrongly — of trying to capitalize on sensational tragedies by being the first to market with an explanation of what happened.

My apprehension about this book was compounded by the fact that it is not written by a single author — or is even a jointly-authored single narrative — but a collection of essays by Steven Johnson, Greg Oliver, Heath McCoy and Irvin Muchnick. Accordingly, I feared that it would be an incomprehensible mess.

Not to mention, the book was about the horrific Chris Benoit double-murder suicide, which was a painful and tragic story to watch unfold in real-time. I wasn’t sure I wanted to relive it so soon in book form.

All that said, Benoit: Wrestling with the Horror that Destroyed a Family and Crippled a Sport, was far better than I expected it to be.

For a book of essays rushed to print, it’s remarkably cohesive — with the exception of one essay, which will be dealt with separately. Of course, having so many authors writing on the same subject does lead to the same basic facts about Benoit’s career being repeated over and over again in each essay. But that is easily forgivable and overlooked.

The essays on Benoit’s career, his wife Nancy’s career as a manager and valet, and the media feeding frenzy surrounding the tragedies read as though they were written by one author. It’s a testament to the easy-reading journalistic writing styles of Oliver, McCoy and Johnson that the bulk of the book reads as though it were penned by one hand.Good chunks of the book grapple with a subject that wrestling fans are still debating today — and will for years to come: What is Benoit’s legacy in wrestling? To a non-fan, merely posing the question sounds ridiculous. The man murdered his wife and son before killing himself! What do you think his legacy is?

But for fans who grew up watching the young Chris Benoit come out of Stampede Wrestling to his time in ECW, WCW and then finally winning the WWE World Heavyweight Championship at WrestleMania 20, the question of Benoit’s legacy is far more complicated than that. For many fans, it is difficult to throw away his long career and pretend — as the WWE is attempting to do right now — that one of the best professional wrestlers in history never existed.

If there is one glaring omission from this slim volume of essays, it is that the book does not raise the possibility that Benoit had been suffering from brain damage. It is true that in the rush to judgment after the fact, steroids were singled out as being “the cause” of the murders. But there was absolutely some commentary on the internet in the days following the murders about whether Benoit had suffered some kind of brain impairment from repeated concussions during his career.

This omission is not so easily forgivable, particularly since the results of Benoit’s brain autopsy have now been released, showing that he had been suffering from chronic traumatic encephalopathy in all regions of his brain at the time of his death.

But such are the hazards of rushing a book to print before the story has fully unfolded.

The highest praise I can give this book (or, at least, the first 135 pages of it) is that this is the career retrospective of Chris Benoit that Dave Meltzer did not write. Meltzer, the editor of the Wrestling Observer Newsletter, whose reporting on the Benoit case is cited frequently in the book, declined to give Benoit the thorough career retrospective biography-obituary that he normally does when high-profile wrestlers die. (The fact that Meltzer has virtually perfected the art of the career retrospective obituary piece is, in its own way, a sad commentary on the state of professional wrestling.) This book fills that gap.

But after 135 pages, the book walks off the proverbial cliff. The book’s closing essay, written by Irv Muchnick, was infuriating — smug, condescending, and full of dense, eye-glazing passages (“Pieces of the Benoit story underscore the illogic and chicanery of these a la carte eschatalogues.”) that are going to be lost on most readers.

Indeed, it’s hard to discern what the point of Muchnick’s chapter is, as it’s wrapped up in so much excessive verbiage as to be nearly impenetrable.

It’s a shame that ECW Press didn’t consign Muchnick’s essay in the round recycle bin and attempt to get someone like Calgary’s Lance Evers (the former WWE, WCW and ECW wrestler Lance Storm) to weigh in on the same subject matter. Evers, a contemporary of Benoit’s who has been an outspoken critic of drug usage and the way the industry handles concussions, and who has watched too many of his former co-workers die too young, would have provided far more insight into the death toll in professional wrestling than the blathering nonsense offered up by Muchnick.

MIKE JENKINSON is a long-time wrestling fan based in Edmonton. Email him at [email protected]. You can also check out The Newsroom: Michael Jenkinson’s homepage.