There are two things you could expect when you wrestled Knobby McDonald. The first is that you and Knobby would have a great match, as Knobby McDonald was a true mat technician. The other? Your dodgeball skills would be tested.

Ernie “Executioner” Moore found out the hard way that anything could happen when Knobby would rile up those fans, even dodging produce.

McDonald and Moore were scheduled for a match at the Caledonia (Ontario) Fair. The fans were boisterous on this particular day, allowing their actions to speak louder than their words during the heated McDonald-Moore contest. McDonald was riling up the Caledonia faithful to a point they were now throwing objects into the ring. But it was not paper and plastic projected into the ring, and it was produce. McDonald had the crowd so angry with him, they were throwing apples and oranges and any food they could get their hands on. Apples and oranges were items they could easily handle, but when a huge watermelon was heaved into the ring, Knobby instinctively dodged the monstrous fruit. However, when he dodged the melon, Moore took the brunt of the melon, right off the skull. The melon to the head was the knockout blow to Moore, but the two miraculously finished the match. McDonald fondly recalls the aftermath.

“A pick up truck had to come ringside and drive Ernie’s butt right to the Emergency Room,” McDonald said with a heelish grin. 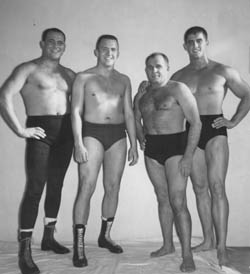 Norbert “Knobby” McDonald spent his childhood on Prince Edward Island. He came to Hamilton, Ontario in 1948. It would be in 1953 that Knobby would take his ever-increasing frame into the world of professional wrestling. He started his training at Al Spittles’ legendary Hamilton gym. After lifting weights for hours, the wrestling hopefuls would take the mat for another few hours. Knobby trained with some of the best around the country, including Billy Red Lyons and the Love Brothers (Reggie & Hartford Love).

Throughout his part-time wrestling career, McDonald worked at Westinghouse in Hamilton, where he retired from after 44 years. Legend has it that the great, tough-as-nails Fred Atkins wanted Knobby to go on the road with him, but Knobby choice to stay home with his wife, Pat, and four kids, and his good job.

Nowadays, the 80-year-old McDonald gathers with some of the other graduates of “The Factory” in Hamilton-area restaurants on a bi-weekly basis. Somewhat reclusive and quiet upon initial questioning, once Knobby began talking wrestling, it is hard to get him to stop.

Ernie Moore wrestled the toughest men in the whole continent but still insists that Knobby was one of his toughest adversaries. “He was a rough guy, big and mean,” Moore exclaimed.

Since Knobby had a flare for getting beneath the skin of wrestling fans, Knobby was designated as a heel. He loved to “stir the pot” and Knobby spent majority of his 12-year career as a hated villain. Being in the ring with Knobby on several occasions and developing a bitter rivalry with McDonald, Moore was always amazed at how he was able to get the crowd loathing him.

“Knobby was the type of guy that could go into a cemetery and still get heat, he just had that presence about him, it is indescribable,” Moore said.

Ron Logue and Knobby McDonald worked together often. “He was great,” said Logue. “He just had the proper moves. He wasn’t one of these guys that would beat you up. He would work with you, and that’s what the game is all about. 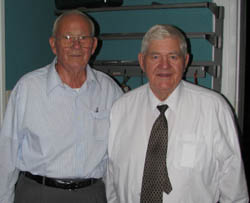 “We did a lot of matches together, and every time we did a match, I knew I wouldn’t get hurt. We’d just put on a good show and everybody had a good laugh, and you went home.”

Along with eagerness to be a heel, he was also keen on tag team wrestling. Knobby’s partner in crime was often Atkins. The tandem wreaked havoc around the province and into parts of the United States, competing in some of the best tag matches of the area. The duo of McDonald and Atkins would have many wars with the Love Brothers and Bravo Brothers.

Knobby had the distinct honour of wrestling in the Canadian wrestling Mecca of Maple Leaf Gardens in 1960, an accomplishment he still relishes today.

One of the first things you learn as a professional wrestler is to expect anything at anytime and when you are in the ring with Knobby McDonald, just expect to duck.