Head back in time with Memphis clipping book

In a business in which win-loss records, championship title heritages and attendance figures are often overlooked despite the historical implications and business revelations they provide, Mark James’ Memphis Wrestling History: Cards, Matches, Results & Newspaper Clippings Vol. 1 can be considered a valuable resource for any ringside historian or longtime fan. 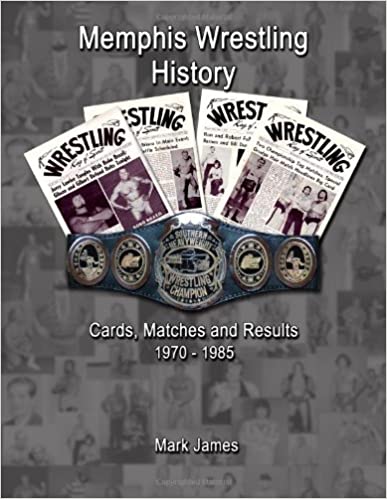 Spanning thousands of Mid-South Coliseum matches between 1970 and 1985, James’ self-published book — the first in an anticipated three-part series — is void of any narrative commentary. Rather, as was James’ goal, it is a straightforward, week-by-week account of what happened in one of wrestling’s most storied territories, as told by the now-defunct Memphis Press-Scimitar newspaper.

The idea to publish a book like this came about in 2004, when James realized the history of his home territory was underrepresented in wrestling circles. While there were Web sites dedicated to the St. Louis and Mid-Atlantic territories, James found very little that touched upon Bluff City’s rich in-ring background. And, as someone who was raised with an appreciation for wrestling’s history, James felt compelled to aid the cause.

“I remember hearing from my grandparents about Danny Hodge crushing apples with his bare hands,” James told SLAM! Wrestling. “I wanted to be able to keep that kind of thing going. I wanted to create a book that a person could take and spend hours looking through, reliving memories.”

The research and production processes took “months,” according to James. He began with Press-Scimitar microfilm found at the University of Memphis library. Although James mentioned the poor quality of some clippings was unavoidable (the microfilm used at the university’s library is the same that’s used throughout the country, i.e., it’s as good as it gets), one of the most time-consuming phases of the book’s production was the Photoshop leg. While it took James approximately four to six hours to scan a year’s worth of results, it took him between 10 and 12 hours to filter and re-filter a year of clippings. Producing the complementary website was the third and final phase of production.

There are few, if any, territories more deserving of the treatment this book delivers than Memphis. Of course, one of the most persistent and widespread WWE myths is that, prior to Hulk Hogan and Rock ‘n’ Wrestling, wrestling was confined to small, lifeless, smoke-filled arenas. The Mid-South Coliseum’s large, vocal crowds — including an old woman who James remembers because she would regularly hand off her walking cane for Austin Idol to use — were proof that regional wrestling wasn’t exactly a failed concept. A Coliseum crowd was considered a sellout if attendance broke 11,500, James said.

Whatever degree of credibility is given to the attendance figures must commensurate with the degree given to the Press-Scimitar. In a few instances, attendance numbers are attributed to Jerry Jarrett, and far be it for any fan to put padding crowd figures past a wrestling promoter. Still, even if the numbers may not be exact, they reveal Memphis wrestling’s crests and troughs throughout the 16-year period.

A March 1983 card involving Jerry Lawler, Bill Dundee, the Fantastics, the Rock ‘n’ Roll Express and Adrian Street drew a lackluster 3,834. But in August 1977, a show featuring two Lawler matches (one against Paul Orndorff, one against Dundee) brought in 11,103 fans.

James pointed out some interesting patterns he found while collecting and scanning the match results. For example, Rocky Johnson and Jimmy Valiant could almost always be counted on to pop the crowds for two or three weeks. On the other hand, masked challengers to Lawler usually drew poorly, James said.

The book will also remind fans of the many familiar faces that found a home, however brief, in Memphis’ ever-changing roster (Lawler and Jarrett traded booking duties on a regular basis, which only exacerbated the revolving door talent policy that was already the norm in most territories). Tully Blanchard appeared for one week in the early ’80s. Terry Taylor and Jacques Rougeau Jr. each had a cup of coffee in Memphis. Ron Slinker, brought in to be Lawler’s karate-skilled foe, enjoyed only a short run on top before being demoted to the lower half of the card.

“Fans didn’t buy it,” James said of the Lawler – Slinker feud. “We thought, this isn’t wrestling.” The numbers confirm his assessment. Slinker’s karate demonstration is advertised in the promotional clipping for the March 13, 1978 show (no attendance given). He then went on to beat Tommy Gilbert on March 27 (8,125 fans), knock out Lawler in the seventh round of a “special match” on April 3 (7,112 fans) and lose to Lawler in a Southern heavyweight championship match on April 10 (5,096 fans). Slinker and Al Costello lost to Steve Kyle and Gilbert the following week.

A chapter of Memphis Wrestling History that should not get overlooked is the last one, featuring images from Mid-South Coliseum programs. These show-specific programs certainly reflect the times in which they were produced. A 15 cent program from 1972 shows a picture of the Masked Interns (scheduled to meet Jarrett and Jackie Fargo), lists “King of Sports” under the “Wrestling” banner, and shows its sponsors to be American Legion Post No. 1 and the Beale Street Elks. A few pages away, however, is the cover of a 50 cent program from 1977 called “Action Ringside!” that features Lawler’s handwriting and artwork (James hopes to include rare caricatures drawn by a heel Lawler that poke fun at ref Jerry Calhoun, and others, in a future volume).

Throughout the territory’s long history, though, one thing remained constant: The Memphis fans cared about their wrestling. If the Press-Scimitar did not publish wrestling results one week, James said, there were guaranteed to be letters addressing the oversight in the next issue. James theorizes that the newspaper’s editors felt “that wrestling stuff” was beneath them and their high-brow publication. Still, the results appeared way more times than not. “The fans demanded it,” James said.

And, should demand for James’ book be satisfactory, he would like to publish a second volume covering 1958 or 1960 to 1970 (so as to include Sputnik Monroe’s legendary Memphis matches) and a third volume for the years 1986 through 1995.