BUFFALO, NY — It’s Thursday, and there’s a big outdoor wrestling show about to go on at Buffalo’s Dunn Tire Park. But it’s raining. For a writer, that’s not a bad thing, as the promoter, local wrestlers, and a legend had some time to kill, chatting with Slam Wrestling while waiting for the rain to stop.

On August 23rd, as Ballpark Brawl VIII pushed their events back due to a rain delay, promoter Chris Hill instead provided an impromptu state-of-the-union address regarding independent wrestling.

This edition of the Brawl was to feature a three match pre-game event starting at noon, with the Buffalo Bisons, Triple-A affiliate of the Cleveland Indians in whose Dunn Tire Park the Brawl would be taking place, playing an afternoon game to be followed by the Brawl itself. The weather, however, had other plans.

“At almost every show we’ve had the threat of rain,” mused Hill, looking outside at a light drizzle at around noon. “We’re an outdoor show so you just roll with it.” What he had to roll with was that the light drizzle was the aftermath of a massive downpour that had without question delayed the show, and was threatening to throw off the whole afternoon.

“The Brawl will be fine,” assured Hill. “The question mark is the baseball game, which is pretty important, and the pre-show.” Hill is being a little facetious about the importance of the ballgame — it represents his paying job. He works as Director of Sales & Marketing for the team, and doesn’t actually make any money by running the Ballpark Brawl. “We’d be okay with six to eight hours of light rain, but once thunder and lightning appear the show stops — just like Little League rules.”

So, with a little time to chat, we ask if there are any last-minute changes that he’s had to deal with. “Always,” he said. Then, he paused, and the slightest exasperation came through in his voice. “In my real job, I deal with professionals,” he began. “I fully understand why independent wrestling doesn’t get any bigger. You’ve got to be professional about these things and develop your product. Most people in the business will be professional until they can find a way to make an extra fifty bucks.” 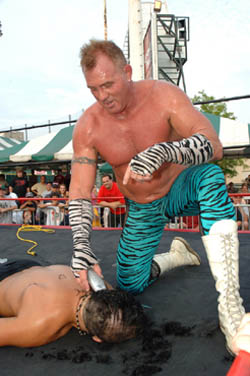 Hill is in a position to draw from a wide range of promotions, from anywhere he so chooses. Having worked with so many different promoters, Hill respects the professionalism ingrained into WWE wrestlers, past or present, above all. “For the most part, I love working with the WWE wrestlers because they get it,” he explained. “Today, for instance, Kishi calls me just to say that he’s on the flight — that’s professionalism. The most important thing is to know where everyone is.” Especially, he noted, during a rain delay.

Two local wrestlers, Primo and Stickball of The Italianos from New Vision Pro Wrestling, arrived on time, in a professional manner. Of course, they only had to make a quick drive over the Rainbow Bridge in Niagara Falls, Ontario, to get to Buffalo. They also got caught up by the rain, though, as they were scheduled to go on as part of the pre-show. Coming to the Ballpark Brawl, as Stickball explained it, is a no-brainer for wrestlers from Ontario.

“There’s more exposure to the United States promoters here, and you get booked more in the States,” he said. “The first year we were in the Ballpark Brawl we got to go to the Upstate New York Tag Tournament.” Primo backed him up, adding that “there’s more recognition in the States, and every good Canadian wrestlers ends up going there eventually.”

Primo also points out that Hill benefits just as much from including Canadian talent in his show. “As much as possible, he uses guys from Southern Ontario,” he explained. “But he’s going up to Toronto as well to get as big a market as possible.”

Back with Hill, he acknowledged how important it is to reach a wide market, especially for a show that has to remind the masses every year that it’s running. “Today, people are really interested in the Ballpark Brawl,” he said as he explained the impact the Brawl has on a year-to-year basis. “Tomorrow they’ll be really interested to see what happened. Two weeks ago people were sort of interested. And then it fades out from there.”

The trick, Hill said, is to focus the event on wrestling. He wants people to remember the matches, and in one particular way he again addresses what he considers to be major issues holding independent wrestling back. “We stay away from the ‘carny’ atmosphere or signing autographs, shaking fans down for money,” he explained. “What I don’t see talent really understanding is that that kind of stuff hurts the business. When a wrestler is trying to get that five extra dollars trying to sell a Polaroid, I understand that they’re trying to put food on the table, but it should be about what you do in the ring. You don’t see WWE guys doing that and it makes them look like a bigger deal.” He returned again to his refrain: “It’s professionalism.”

Another performer roaming the halls, singing his heart out and enjoying the acoustics, is legendary WWE manager Slick. Why is he singing? “I’m having fun,” is his straightforward answer. When asked about coming to Ballpark Brawl in particular, Slick is upfront about not being personally involved in the decision, and defers to his booking agent as far as choosing his shows. “From time to time I come out of retirement, or being fired, however you want to put,” he said, with only a hint of a grin. One thing becomes instantly clear, though, and it’s that while he may not personally hand-pick shows at which to make an appearance, it’s not because he regards them to be insignificant; in fact it’s the opposite. 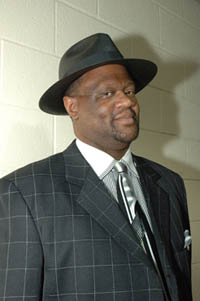 “All wrestling shows are big, in my opinion,” he suggested, and coming from someone who has seen big and small events, it rings true. “One’s no bigger than the other because it’s about the sport, not the venue.” That would explain the singing — Slick seems legitimately happy to be a part of the show.

To back this theory up, he explains further that he really doesn’t have to do this for the money. “This is not my full-time occupation — I’m a schoolteacher by trade,” he went on, pointing out that he made provision for life after wrestling before he had been surprised to find himself without a place in the ever-changing landscape of wrestling. Most of his peers, he points out, who were also surprised to find themselves without a job, hadn’t been so fortunate in preparations for life after the show.

Going back one more time to Hill, who’s now checking his watch, the weather, making phone calls, and making preparations for moving the ring into the parking lot as the rain has left the field too wet to support the ring without damaging the field, he concluded his treatise on the state of wrestling by looking back to the ’90s, when WCW figured out a way to stand out. Hill contends that it wasn’t the NWO that single-handedly propped WCW above the then-WWF.

“You would watch WWE and you get kick-punch-kick-punch, then you watch WCW and you see the Luchadors doing crazy things that you’ve never seen before — Mysterio, La Parka and others doing something different,” he recalled. “The NWO was basically the same as any other invasion storyline, except it had the surprise turn of a guy that hadn’t been a bad guy in a long, long time. What kept viewers interested was that they offered things that were different. Maybe the WWE should change, stop going after every giant, cut their ring down to 18×18 instead of 22×22. It’s great when you have Rikishi versus Mabel, but it makes smaller guys look even smaller.”

As Hill keeps talking passionately and earnestly about what it takes to stand out, the question was then raised of Hill: Does all of this mean that he would like to do more shows — perhaps even run a promotion? “I’ve been approached about it, but this isn’t my life,” he said. “I really only do this for fun, but I do believe there needs to be a lot more business-savvy people in the independent business for it to expand.”

He has even pitched the concept of the Ballpark Brawl to companies looking to do something different than the traditional house show. “Nobody makes money on house shows, with the salaries wrestlers are making, which is why you don’t see much of them anymore,” he said. “Someone should team up with minor-league baseball teams, hockey teams, and instead of going into an arena, you go into a big stadium and the local team promotes the heck out of you.”

Shortly after that, the rain stopped, the ring was set up, and the show began. The baseball game had been postponed, but the wrestling would go on. The city if Buffalo would be abuzz about Ballpark Brawl again … for another few days until next year rolls around.

Then Hill starts all over again.

Behind the scenes at Ballpark Brawl