Behind the scenes at Ballpark Brawl

BUFFALO, NY – It’s fifteen minutes before showtime – do you know where your wrestlers are?

Ballpark Brawl IV rolled out its show in Dunn Tire Park, Buffalo on Friday, July 15. While the 1,200 fans were treated with a chance to see Dusty Rhodes in action and a surprise appearance by CM Punk, Slam Wrestling received an opportunity to follow promoter Chris Hill backstage as he scrambled to pull all of the elements together under volatile circumstances.

Hill has been working in various capacities of the sports business for fifteen years, and has been the Director of Sales & Marketing for the Buffalo Bisons for five of those years. The Bisons are the Triple-A affiliate of the Cleveland Indians, operate in the 18,000-seat Dunn Tire Park, and are one of the top teams in the minor leagues after leading the International League last season. Hill’s cluttered desk boasts bobble-head dolls of Bisons’ prodigies such as Moises Alou and Bartolo Colon.

At 6:00 on Friday night, with one hour to go before the event is scheduled to begin, Hill is in his office, anxiously awaiting word on one of his wrestlers who is caught at the border. Teddy Hart has sent word that U.S. Customs are not permitting him to enter the country. Not surprisingly, Hill doesn’t have much sympathy at this moment. “I’ve got a former FBI guy trying to help him at the border,” he said. “We’re doing all we can. This guy is costing me about a thousand dollars right now.”

It’s hardly unheard of to have a last-minute change in the scheduled line-up, something that Hill has learned over his career. “This is normal,” he admitted. “You’re dealing with 30 individual personalities, so it’s a constant shuffle. When you’re dealing with a music act, you’re dealing with one group. Here, you can have 29 out of 30 things happen the way you want them to, and one thing can screw up and cause a chain of events, which is what happened.” He paused, and then shrugged his shoulders. “And that’s my fault as a booker.” With a grin, he added “I wish I did this when I was younger,” though he refers to his age simply as “mid-thirties.”

There is, however, a deeper sense of regret that a planned surprise bout between Hart and Punk isn’t going to happen. “I’ve been working on getting this match since last October,” Hill lamented. “And now it won’t happen tonight, and it may never happen with Punk being in the WWE.” The match that was to be the defining moment of the night has been lost, and it’s a deflating development, even compared to problems Hill has faced in the past.

Hill began experimenting with the unusual combination of baseball and pro wrestling while working for a baseball team in California. Being a big wrestling fan, he saw an opportunity to combine the two with a show loaded with, as he put it, “All these legends that couldn’t work anymore. I got burned by a shady promoter and lost eight thousand dollars. I learned a lot.”

In 1998, Hill worked in sales at the Arrowhead Pond in Anaheim, a position he held until 2000. During that time he was able to work up close and personal with the WWE events that ran in the arena. “They’re so good at what they do,” he said with obvious admiration for their business sense. “Just watching what they did helped when I got up here.”

The last thing on his mind right now, though, is how the WWE takes care of their business. The decision has been made to re-organize the show without Teddy Hart’s involvement, regardless of any last-minute developments that might have him arriving at the stadium. Hart is trying to reach Hill on his cell phone, but the time for talk has passed. “No — no talking to Teddy right now,” Hill said as he hands the phone back to one of his assistants. “It’s going to voice mail.” He shakes his head, and mutters. (Later, he would say that the door is open for Hart to return in the future.) 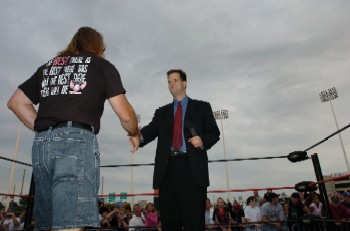 After a moment’s respite, however, Hill turns his attention to re-structuring the card. Dan Murphy, a senior writer with Pro Wrestling Illustrated, will be controlling the backstage environment when Hill is at ringside. They have worked together in the past, and show a mutual familiarity and trust as they discuss the role of CM Punk. Their goal is to put him in the show at a point to achieve maximum surprise and impact. Ideas are tossed around about which match or promo he should interrupt, and whether he should go directly into a match or draw out the expectations of the fans.One saving grace in the middle of chaos is a visit from Hill’s wife Christy with their eight-month-old son Caden in tow. Hill’s appearance and demeanor changes instantly, and suddenly getting Hart across the border isn’t as important as getting a smile from Caden. A.J. Styles (a recent first-time daddy himself) happens to be walking by and stops to make some faces at “the cutest kid in the world,” as Hill proudly describes his son.

The aggravation that Hart’s no-show brings will not subside, however, as several assistants keep checking in with Hill on the wrestler’s status. “It’s all right,” Murphy said to Hill in an attempt to soothe the waters, “It’ll be a better show without him.” Hill is not about to let his personal disappointment cloud his judgment of what would be best for the fans, however. “No, it’s not a better show,” he retorted, “We needed that match.”

With three minutes to go before showtime, it’s decided that Punk will interrupt Hill as he is about to announce the first match. “I’ll be standing in the ring, confused about what’s going on,” Hill explained on the fly. “Then Homicide will come into the ring and I’ll be really confused — except I’m taller so I should probably get out of the ring.” This delicate bit of creative handling brings a smile to all involved in an otherwise tense atmosphere. Besides, he’s right. Hill checks in at 6’4″, practically dwarfing Homicide at 5’10”.

Thirty minutes later, with the order of matches re-organized and the show finally ready to begin, Hill readies himself to get in the ring. “I hate wrestling shows that start late,” he said. “But it is what it is. We add layers and complexity to our shows that we probably don’t need to.”

He does one final check on everyone surrounding him, ensuring that people know their jobs and are ready to do them. “The one thing I’ve learned is that you can get out of everything,” he said, almost assuring himself. “The worst show I ever did had six no-shows, and that can crush a show. But if you can get a good quality replacement, and if you take care of the fans and are honest with them, then they will still love it.”

After the final three-count of the night had signalled the end of the show, Hill took the time to thank every one of his wrestlers, and made sure that they knew where the after-party was taking place. Finally back in his office and able to sit down, he relaxed for the first time all day. “When I made the call for the championship — I almost passed out. I got really lightheaded,” he said with a smile. “I really want to enjoy all this but I can’t right now. I’ve lost my voice and I’m tired.”

His job isn’t finished yet — he still has to oversee the dismantling of the ring, make sure the wrestlers get their paycheques, arrange for a limo service to work into overtime since the show ran late, and try to please a fan clutching a chunk of table that was broken off during the Punk/Homicide match, hoping to have it signed.

“By the way,” Chris said, smiling as he works through the post-event management, “I get paid zero for this.” Obviously, he values less tangible satisfactions and rewards more highly than money.