James Mitchell: Still in the picture 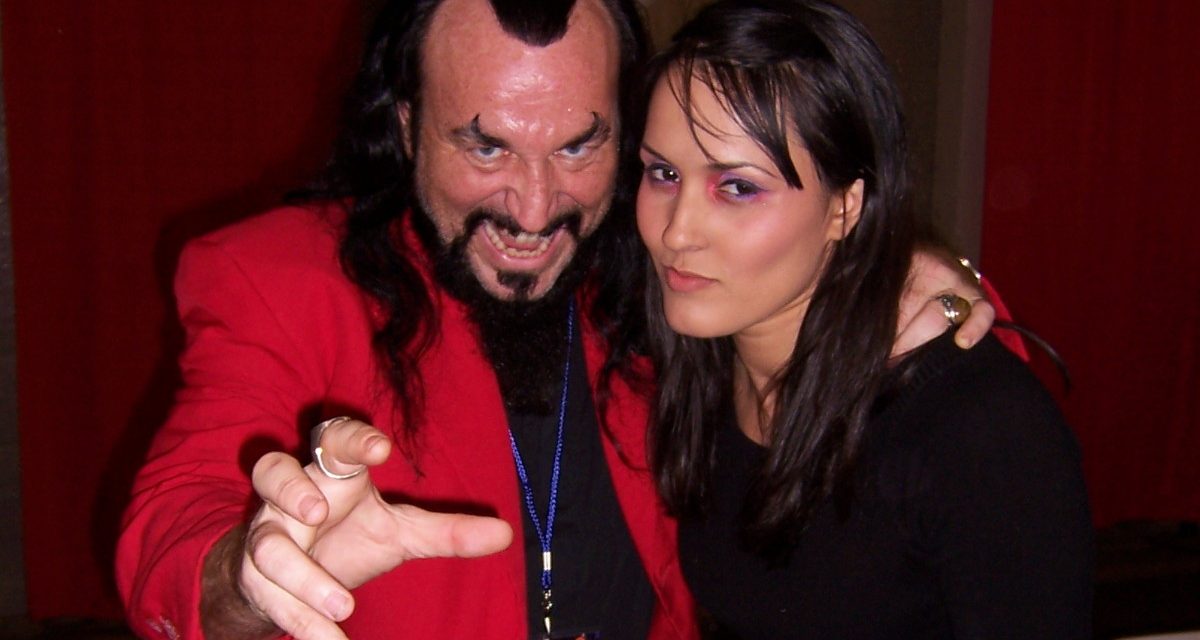 Though recently divorced from Abyss, manager Father James Mitchell is still very much in the TNA picture. He’s in the latest action figure release, all over the Abyss DVD, and has been threatening about his next charge arriving: Judas Messias.

Mitchell has his eyes on the TNA World Heavyweight title, a level he first achieved with Abyss late in 2006. And true believers, there is no doubt in his mind who was responsible for the win. If Mitchell had his way, the Abyss DVD, Doomsday, would be titled Miracle Man: How James Mitchell, the Greatest Manager of his Generation Turned Abyss, a Stupid, Ugly, Idiot Man-Child with a Thumbtack Fetish into a World Champion. 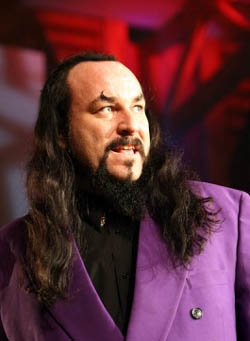 He called Abyss’ upset of Sting to claim the NWA World title (which TNA no longer recognizes) the “pinnacle of Abyss’ career,” in a media conference call before the TNA Turning Point pay-per-view. “It just shows exactly how brilliant I am because Abyss is a 350-pound man with a mind of a four-year-old. He can’t tie his own shoes, he can’t feed himself, he can’t do anything for himself. If it weren’t for me, he would not have become the world heavyweight champion. I did everything I could for that moron.”

Up next is Judas Mesias, who at the moment, is just a name to viewers. (It is expected to be Ricky Banderas.)

Mitchell touched on Mesias, and his goals. “When it comes to business, I don’t care about friends, I don’t care about alliances. If my grandmother were holding the title and Judas Mesias were in, I would have him coldcock her with a lead pipe and take it from her. I don’t care. My ultimate goal is to always be the man and handling the men who have the gold.”

The former James Vandenberg (in WCW) and Sinister Minister (in ECW) is an oddity in today’s wrestling business — a male manager.

“About the time I got into the business, managers had started to be phased out in favour of beautiful women with lascivious protuberances that had a mouthful of marbles, couldn’t talk, and didn’t understand what they were doing at ringside. However, I waited it out, and I kept plugging along. I didn’t let anybody close a door in my face. I was too stubborn to disappear,” he explained.

When Scott D’Amore’s Team Canada was disbanded, that pretty well left Mitchell as the only male manager on television for a while. In the WWE, Armando Alejandro Estrada has come and gone from the side of Umaga, making the mistake of getting over. (He’s now ECW general manager.)

“For about a year or two, I was probably the only televised wrestling manager for a while. I mean, they just didn’t exist,” Mitchell said.

Now, he competes for screen time with managers like Ms Traci Brooks, Gail Kim and Jackie. He has nothing but praise (and admitted lust) for the trio. “These girls can go. They’re different from the era of Miss Elizabeth and some of the other ones. When the first influx of women happened, a lot of them just looked like they didn’t know what they were doing, like they were a deer caught in the headlights.”

Heavily influenced growing up by manager Gary Hart in the North Carolina-based Jim Crockett Promotions, Mitchell sees himself in the same vein: the cold, calculating manipulator seeking out the human oddities to perform his doings.

While Hart had the likes of the Great Kabuki, Pak Song or Abdullah the Butcher, Mitchell has had Abyss and the Disciples of The New Church in TNA.

“These are things that resonated with me. These misunderstood outsiders that were sort of thrown to the side or marginalized by society or within the wrestling world, but they had great talent,” he said. “Maybe they weren’t able to speak or communicate the way they needed to, and that was one of the things holding them back. If you took a tour through my house right now, you’d feel like you were walking through the Ripley’s Believe it or Not Museum. That has not been typecasting.”

A good manager should be able to elevate a wrestler up the proverbial ladder, he said. “I’ve always prided myself on being able to take A-list material and score a home run or touchdown. I’ve also prided myself on the ability to take ridiculous situations and transcend it, and still make it work.”

“Ridiculous” could sometimes describe the pace of the TNA Impact show, where angle after angle is overlapped over rushed matches, all in an effort to get everything into one hour.

Mitchell said that everything he has heard indicates that TNA Impact will be a two-hour format in the foreseeable future.

“We’ve got a great roster of wrestlers. I would put the talent of TNA’s roster — whether I personally like any of these people or not — up against any wrestling organization in the world at any time in history,” he said. “But we are working against time constraints. We’ve 43, 48 minutes, something like that, to put on television, and you might have 40 or 50 people on the roster. We’ve got a lot of guys, I think, that can break out.”

Some weeks it is like Mitchell doesn’t exist in TNA’s world. “I’ve been on both sides of the fence. I’ve been on the side where I’m in five segments a night. I’ve also been where I’m lucky to get three seconds. I understand the frustration that some of the wrestlers go through,” he said. “With two hours, I think it would give us a lot more room to breathe, I think it would make the show run at a less hectic pace than it does occasionally.”

There needs to be a balance between established stars and homegrown TNA talent as well, he said. “You do need the established faces and names to draw in the casual viewer who may not have watched wrestling in the last six years, since the Monday night wars era,” Mitchell explained. “I think it’s important that you just don’t have two legends going at it. I think the important thing is to always be taking your homegrown talent and booking them in positions where they can be seen in that light.”

“I’ve sat and watched him over and over again,” he admitted. “I can see myself working with Senshi in the same way Gary Hart worked with some of the crazy people that he did. Senshi is extremely tough. That is a brutal, brutal guy. He knows how to wrestle, he knows how to shoot. He’s a tough customer and he’s scary, and he’s leading edge. If they would allow me to manage him, I’d have him in the world title picture within four months.”

A return of Sabu to TNA is a possibility as well, this time on Mitchell’s side against Abyss. “I think he has done a lot of great things for this business that probably won’t be appreciated fully until he’s dead,” Mitchell said of his former enemy, explaining that The Sheik’s nephew was “not a man who is going to be manipulated.”

As for Rob Van Dam, Mitchell has a long history with him, and thinks he’d be a good addition to TNA or any promotion. “He and I, in a lot of ways, started out in the same place television-wise in the old South-Atlantic Pro Wrestling territory in the Carolinas that was run by Greg Price and John Ringley, I believe, back then. He was a skinny little guy with a lot of promise back then. He kept plugging along and made it to the big leagues. He’s an incredible athlete, funny guy.”

He had less positive things to say about Pacman Jones and TNA’s regular use of celebrities to try to draw new audiences. “First of all, on principle, I don’t like bringing in celebrities into wrestling that have no wrestling experience,” he said. “To me, in a lot of ways, it is insulting to wrestlers, the people that have paid their dues, wrestlers that have bled and broken their bones, left parts of their bodies in rings all over the world. [They] are put in the shadow of somebody who gets in from a different field of endeavor.”

But recognizing who pays the bills — and who was listening in, explaining to the media that Mitchell was not in a position to comment on TNA’s drug policy — Mitchell backpeddled a little on celebrity involvement. “To the degree that it brings a positive light on TNA, sure, I’m all for it.”

Having answered the questions from the gathered media and done his best to run down Abyss in every way possible, Mitchell took a moment to drop into mega-huckster role about Series 8 of TNA’s action figure line.