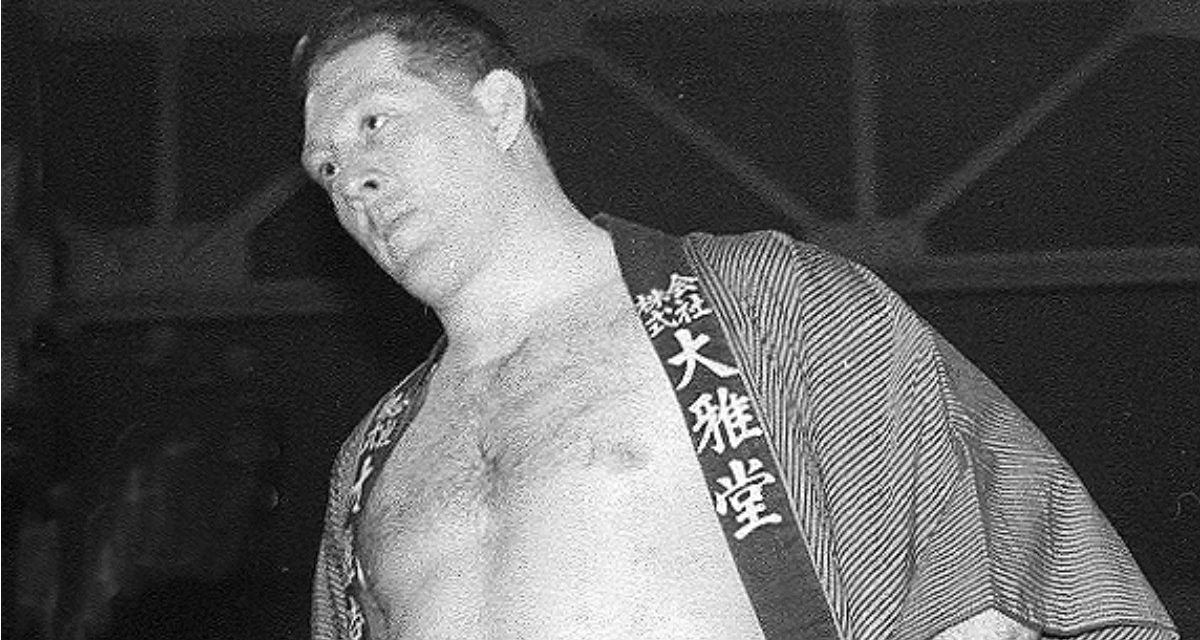 Karl Gotch, who died July 28, 2007, at the age of 82, was not someone who could be dismissed easily. Judging from the people who shared their recollections of Gotch over the years, he was either worshipped or despised.

There was a level of confidence that he carried about him, a knowledge that there was next to no one who could take him on the mat. Understandably, that could be misconstrued as arrogance. Trained at the fabled Wigan Snake Pit in England under Billy Riley, he did have the goods to back up his boasts. 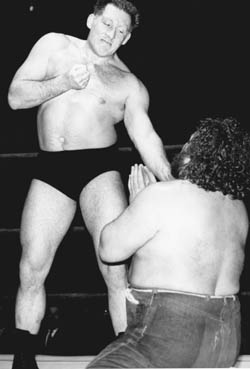 Karl Gotch loses his temper during a match. Photo by Bob Leonard

But there was also a fish out of water aspect to Gotch in the early years, when he was in his prime in North America in the 1960s. He was a European — Belgian by birth — trying to fit into a strange culture. Even the professional wrestling in Europe was different than what he came to learn in America. Some of the stories reflect that fact as well.

“He was one of the toughest guys in the world, but everybody was scared of him, and nobody wanted to work with him,” explained “Nature Boy” Roger Kirby, who used to go to the YMCA in Charlotte, NC to work out with Gotch and Gory Guerrero. “Just a super, super nice guy. He was fun to workout with because I would try my best and he’d just be playing with me. … He could hook you and do [things] with you from any angle, whether he was on top, underneath, standing up or laying down. He was just phenomenal.”

Paul Diamond got to know Karl Gotch in Hawaii, working out in Dean Ho’s gym. Gotch would do a wrestler’s bridge and bench 200 pounds. “After a workout with the weights, he’d go run! Nobody ran in those days. And if any of the guys ran with him, they’d fall behind. When they’d catch up to him, he’d be there doing sit-ups, squats or something, and take off again,” laughed Diamond. “When you worked with him in the ring, you had to fight for your life.”

“I learned to hook from Gotch. If I couldn’t beat you with my hands, I’d take you on the mat and go south with something you didn’t think you could go south with,” said Dutch Savage. “In Karl’s prime, everyone always talks about how tough Billy Robinson was. When Karl was in his prime, Billy Robinson couldn’t even get close to him, couldn’t even get close to him. You know who was another great shooter that never got any recognition was Hiro Matsuda.” Matsuda’s trainer? Karl Gotch.

FISH OUT OF WATER

Dominic Denucci worked with Karl Gotch in California. “He was a good wrestler, he was a shooter. But he was making five, six, seven moves at a time, including the amateur. The people didn’t understand what he was doing. He came in to San Francisco, and Roy Shire wanted to give him a shot in the main event with Ray Stevens. Then a month later, I was coming with him, with Ray. Well, on the TV, he [Gotch] was great for me to watch, for the wrestlers to watch, but the people didn’t understand what he was doing, all the moves and everything. It didn’t catch on.”

Denucci said a Gotch versus Stevens match drew poorly, but when he and Stevens hooked up, the place was packed. Later, a despondent Gotch asked Denucci what happened.

“He said to me one time in the bar at the Embassy Hotel in San Francisco, ‘I don’t understand.’ I said, ‘What do you mean you don’t understand?’ He said, ‘You can’t wrestle amateur like me.’ I said, ‘No, I cannot. I wrestled amateur, but I don’t know all that you know. But in this business, I don’t have to know everything. You have to know how to defend yourself.’ So he said yeah. But I could see in his face that he was not happy because I sold out and he drew $24,000. I said to him, ‘[Karl], because you do so many things, the people don’t understand what you’re doing.’ The babyface has to die, so that the people like him. You can’t be on top of the heel all the time.”

“I loved him, and everybody up here that I know loved him. He was a great guy,” said Minneapolis wrestler/trainer Eddie Sharkey. “I learned a lot from him … He’d give me different hints about working out. Once in a while, he’d teach me how to hook a guy.”

Gotch was a trainer at New Japan Pro Wrestling’s dojo in Toyko, and that’s where “The Dynamite Kid” Tom Billington first encountered him. In his autobiography, Billington talks about Gotch’s teaching style.

“Karl was one of the old-time shooters, highly respected by all the wrestlers, but he had a high opinion of himself and liked to take advantage where he could.

“I’d gone over to the dojo to train one day and Karl was coaching a group of Japanese young boys. He said, ‘Tommy, let me show you how to do a sleeper.’

“So he did. Twice. Only I missed it both times, because, well, he’d put me to sleep. So I said, ‘Karl, how can I see it when you’re doing it to me? There are 20 Japanese boys in here. Why don’t you put a sleeper on one of them, so I can see how it’s done?

“But he wouldn’t. And I know why he wouldn’t: [Antonio] Inoki wasn’t paying him to hurt his Japanese young boys, and he didn’t want to lose his job. Prick.”

In September 2004, Crimson Mask sat down with Buddy Colt for an interview for Georgia Wrestling History, and Gotch came up. Colt said Gotch was “horrible” to work with. “[He] had his own style where he was always trying to impress everybody how ‘great’ he was, which was why he never made any money in the United States. Outside of booking in Japan, he never made any money here, because of his attitude,” Colt said. “I worked out with Karl on the mat in Sydney, Australia, him — Karl — and Joe Scarpa and myself would go there and work out once in a while. And Karl was very good at hooking and using submission holds, he was quite adept at that, but how good he would have been against someone like say a Jack Brisco or a Bob Roop or a Dale Lewis or a Tim Woods, that’s something else again. There never was a way to find out, because it never happened.

BADDEST OF THE BAD

“Karl was like Lou Thesz, he was the baddest of the bad,” Ron Wright told Kayfabe Memories. “He never made it big in wrestling because he was too mean, the promoters couldn’t control him. He’d tell them what he thought and that he’d beat who he wanted to. They’d put some flunky in the ring and want him to put them over and he wouldn’t do it. He’d say ‘how can you ask me to put someone over who can’t even tie my shoes? I’ll make him look good, but beat me? No he won’t.'”

Boris Malenko, the father of Dean and Joe Malenko, tried to get him to challenge Gotch, said Wright. “Malenko wanted me to work out with Karl. I went down there and we were out in his back yard talking, he’s a hell of a man, nice as he can be. Malenko says, ‘Ron, get your bags, work out with him a little.’ I looked at Karl and said, ‘I’ve heard enough shit about you for twenty years that I know better. I have too much respect for you to even try you. I can’t do nothing with you, and I ain’t gonna try.’ And he says, ‘I respect you for that. I still get college kids who want to try me.’ Ain’t none of them could do anything with him. Twenty years ago he was in his sixties he had logs with handles that he worked out with. He had a rope that must have went a hundred foot in the air, and he’d climb that rope to keep up his arm strength. Malenko said ‘climb that thing’ and he climbed that thing like a monkey, didn’t even have to use his feet. Just pulled himself. Then Malenko told him to do it the hard way, and he flipped himself upside down and pulled himself up.” 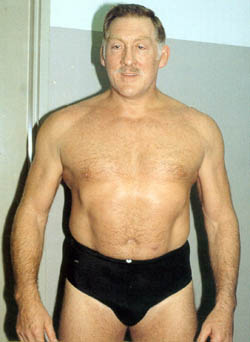 “WHAT AN ASSHOLE HE IS”

Bob Cook trained with the Great Malenko in Florida. “Once in a while, Karl Gotch would show up,” Cook told Scott Teal’s Shooting With the Legends. “What an asshole he is. Please quote me on that. He was an idiot. He put me to sleep one time while he was trying to be a smartass. ‘Let me show you boys the sleeper hold.’ The next thing I know, I’m on the ground. He was an arrogant jerk.”

Moose Morowski was on the first Japanese tour when Andre the Giant came through. “He’d come to work for New Japan Pro Wrestling, and I had signed a six-month contract,” said Morowski. “That’s when I met Andre the Giant. On that tour was Karl Gotch, Billy Robinson, Sean Reagan, myself, and Andre the Giant came in. At that time, Billy Robinson was a big star in Japan, and so was Karl Gotch. They were going to have a battle royale, and they were talking about putting Robinson over. This is one thing I can say about Karl Gotch, he stepped in and said, ‘People won’t believe it. Look, this is your future.'” Gotch stood up for the rookie Andre the Giant and the rest, as they say, is history.

The last number of years, Karl Gotch seemed a bit of recluse. He declined interviews, didn’t attend his induction into the Professional Wrestling Hall of Fame, and was a big of an enigma to old friends.

Dotty Curtis attempted to get in touch with Gotch a few years back, inviting him to come visit her husband Don Curtis, one of the greats to come out of Buffalo, who has suffered numerous health challenges over the past decade. She never heard back. “At one point we were very close with Karl. We lived in the same complex, and I cooked for him every night, until he wife and daughter came down to Tampa to be with him. Then he went off to Japan, and we moved, and we just never did catch up with him again,” said Curtis. “We saw him at [Boris] Malenko’s funeral. He was there with his wife, and sat behind us. When the funeral was over, I looked around and he was gone!”