WATERLOO, Iowa — It’s obvious once he started talking that Trevor Murdoch wanted to talk about Chris Benoit. The topic is a delicate one in the industry. Some refuse to talk about Benoit, and others seem to be on every talk show.

With their star status and built-in entourage of public relations soldiers, WWE wrestlers don’t always get to speak their minds like they might like; and sometimes when they do, it can be to a general assignment reporter on a small-town paper who knows little about what they do to make a living. 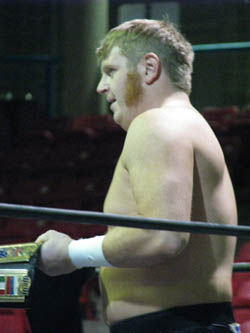 After some insightful conversation about the joys of working in front of small crowds and the trials of being a tag champion, Murdoch (real name Bill Mueller) insists to SLAM! Wrestling that he’s cool to talk about what happened with Benoit the weekend of June 22-24, 2007, when he is alleged to have murdered his wife, Nancy, and son, Daniel, before hanging himself in their home outside Atlanta.

It turns out that Benoit was one of Murdoch’s supporters. Through his trainer Harley Race, “Trevor Rhodes” had gotten a chance to go to Japan for six months, where he learned a lot of the unique Japanese style.

When Murdoch got a WWE tryout, Benoit saw him in the ring, liked what he saw of the Japanese influence, and encouraged WWE talent relations honcho John Laurinaitas to keep an eye on Murdoch.

Once he was hired, Benoit kept up his interest in Murdoch.

“Every time I’d seen Chris, he was asking me how I was doing, if I needed help with anything. Just generally, if everything was okay,” Murdoch told SLAM! Wrestling. “He seemed to always be concerned that my well being was okay. And we’re on two different programs, he’s on Smackdown and I’m on Raw.”

From there, Murdoch is rolling.

“He was a guy that had an immense drive and desire to be number one and to be the best in this business. That drive and desire made him who he was — the best in the business. It sucks the way things turned out. That person I don’t know. I don’t know the Chris Benoit that committed this insane tragedy. But the guy that I knew, I never would have assumed, or put two and two together, and if you ever spoke to him or spent any time with him, you’d know that Chris was not the guy that would ever have been associated with this. And the media is just burying us. I’m just being honest. They’re all extremely easy and eager to point the finger at steroids and to make it sensational. I don’t. It’s easy to point the finger at steroids. This whole thing went over three days. There’s just no way that ‘roid rage can last that long. And if people would just listen to the facts, they could put two and two together.”

Murdoch will admit that painkillers are a fact of life on the WWE circuit. It’s a tough business. “I’m not saying the guys on the road don’t take painkillers. I’m not saying that average people that are sitting at home reading this don’t take painkillers. Just because right now we’re in the spotlight, it’s a bad thing. We’re in a business where our bodies get beat up. We go through, on an average, if you say on average, we get knocked, on average, five, six times, at the very minimum, a night. Imagine standing up there, throwing yourself back down six or seven times, five or six times; after a while, after a time period, you’re going to hurt. And you need stuff, not all the time, but just to make you sleep so your legs quit hurting, or your hips quit hurting, so your back quits hurting. There are times that guys get dependent on them. It happens. It’s called addiction. Everybody has a weakness. And granted, it may have been a combination of painkillers, steroids, alcohol, I don’t know. We may never know. But I know Chris was, bottom line, a good-hearted man that loved wrestling. That’s the only person that I’m ever going to remember.”

Like fans, Murdoch also feels a sense of betrayal at what Benoit did and how it will affect his legacy, which will be forever “tarnished” with the “horrible, horrible tragedy.”

“What sucks is that Chris will never go down in a Hall of Fame. He’ll never from this point be remembered for being the wrestler that he was. He’s always going to be remembered for his last actions, his last three days. It’s horrible that one man’s life can be summed up in three days, but that’s exactly what happened. It’s human nature to remember the bad instead of the good.”

In the WWE locker room, Murdoch said that each are dealing with the situation in their own way.

“It is what it is, and we all have to deal with it today. In the locker room, it’s a little shocked and stunned. We all loved Chris, so we’re all at a serious crossroads in our feelings. Some guys are extremely upset, some guys are holding their feelings in and it doesn’t bother them at all,” he said.