Who knew that a lowly piece of home hardware could result in some of the greatest matches of all time? Ranking right up there with steel cage bouts, ladder matches have the ability to change the complexion or mood of an entire wrestling card. With the inclusion of the steel structure, you just know someone is gonna get hurt and get hurt badly. 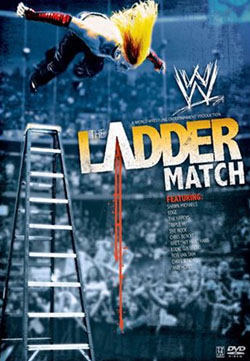 The WWE Ladder Match DVD set is an excellent three-disk collection, but when it comes to the history of the gimmick match itself, it is not very comprehensive. When reviewing the list of matches there are glaring omissions and it is no surprise that they are virtually all WCW and ECW matches.

How could you have a ladder match collection without the Sabu versus Sandman ‘Stairway to Hell’ bout? Or the triple threat match pitting Sandman versus Steve Corino versus Justin Credible? How about Syxx against Eddie Guerrero at nWo Souled Out, or Chris Benoit versus Jeff Jarrett at Starrcade 1999? I believe there is a classic Dusty Rhodes versus Tully Blanchard one kicking around as well. Instead we get 3 Count versus Jung Dragons versus Jamie Noble and Evan Karagias at Starrcade 2000 as the only contemporary non-WWE addition. Admittedly, the match is a wild one, but if you are going to publish a themed set, you should really do your homework and scour through the vaults of all the properties your company owns. Makes sense, right?

The WWE matches are the cream of the crop though. You have your usual suspects: HBK versus Razor Ramon, TLC matches, Benoit versus Chris Jericho, Eddie Guerrero versus Rey Mysterio and the Money in the Bank contests. Thrown in for good measure but not good viewing is a Jake Roberts and Big Daddy Ritter (The Junkyard Dog) match from Stampede Wrestling where they only use half a ladder and it has to be held up by two officials when Ritter or Roberts want to climb it. It is too bad that Ritter’s boot comes into play more often than the ladder itself. (I’m guessing that footage of older Stampede ladder matches with ‘Cowboy’ Dan Kroffat doesn’t exist.)

No matter how good they are, watching ladder match after ladder match gets kinda wearisome after awhile as the same kind of spots are used again and again. Predicting this problem, the producers have buffered the matches with in-studio commentary and interview segments hosted by Todd Grisham. You are better off downing this tasty beverage in small sips rather than chugging it.

For fans it is a blessing to have all of these matches in the same set. By leaving out the ECW, WCW content and for some really insane reason not including the greatest ladder match of all time — HBK versus Ramon at WrestleMania X — this set cannot be termed as the “ultimate collection” though. That should have been the mind-set at the production phase of development. Why not aim to put out the best set possible? Why not do some real research? Why not set the standard? Well, at least this isn’t Inside The Steel Cage. That is something we can be thankful for.