Over the years, I was able to interview Chris Benoit on numerous occasions, the first time being a lengthy question-and-answer session in 1997. Out of the blue he emailed me in 2005 to say hello. 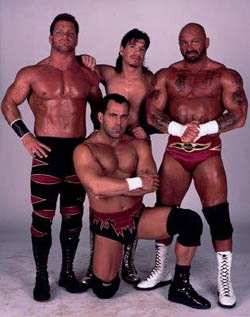 He wanted to say thanks for that 1997 Q&A, and marveled at how far he’d come since then, and what trials and tribulations he’d been through.

Benoit’s subsequent emails were revealing and offer a deeper look into a troubled man, especially after the death of Eddie Guerrero, on November 13, 2005.

Guerrero was Benoit’s best friend, and I sent a note to Chris offering my condolences. His response on November 25th offers a remarkable insight into the trials of the road, the pain of the loss of his moral compass in Eddie, and his attempts to deal with the agony.

Hi Greg, thank you for your e-mail. I know that he has left us but I still feel like I’m going to see him on the road next week. I do not know if I will ever have as good a friend as I did in Eddie. I was able to talk to him about anything in my life, and he was always able to make sense of things or change my perspective. Whatever I was going through or whatever issue I had, Eddie would never point his finger at me. He would use situations that he had been through in his own life, times when he had hit rock bottom, and could not immediately change the problem, but how he brought about inner change which helped him accept the situation and better cope. I believe in God and I do pray, but I could not quote any of the scriptures off the top of my head. We would be on 250 mile drives and Eddie would have his bible open quoting scriptures and talking about different passages. Anyone else and I would jam on the brakes wherever we are and they would be walking. But Eddie had such a way of applying them to whatever we were talking about and make so much sense of everything.

He was somewhat of a spiritual guide for me. I do not know if you read the Bible at all, or what your beliefs are, and I will respect you for whatever your beliefs are. But if you ever get the opportunity to read about Job, it reminds me so much of Eddie. All these tragedies happened to him. He at one point after coming out of rehab had nothing but the clothes on his back. He had physically, mentally emotionally and monetarily hit rock bottom. He lost his family, his wife and children had left. But he never lost his faith and through it was able to overcome the odds.

Instead of Eddie becoming bitter, Eddie became better. In our business it is really difficult to understand why we do what we do and why we think what we think unless you are in it, unless you have a passion for it, it is so demanding physically, mentally and emotionally in every possible way, but when you love it as did Eddie, as do myself, you have a better understanding of why we do what we do. I do not believe that I will ever find someone that I will bond with and be able to understand and be understood as I was with Eddie. I’m not looking forward to going back on the road, not that I ever did, I hate the road, but I looked forward to Eddie’s company and camaraderie. Both of us hated the road, being away from our families, but both of us lived for that in ring bell to bell time.

My wife Nancy bought me a diary and I have started to write letter’s to Eddie, it may sound crazy but that is how I’m coping. I’m sorry if some of this e-mail does not make any sense either but it helps me cope. Thank you Greg.

Having written about professional wrestling now for more than 22 years — as long as Benoit wrestled — I know about the pain wrestlers go through, both physically and emotionally. Yet there is a unique desire in each of them to perform for a crowd, to test their body’s capabilities, and to soldier on no matter the consequences. The pressure to keep performing is immense, and so is the pressure to keep themselves in shape, no matter the cost. Professional wrestlers, for the most part, are contracted help. They have no exit plan, no pension plan, no medical plan, and often no end in sight.

What else did Benoit have besides pro wrestling?

In mid-2006, Benoit’s name came up during my research and writing of my book, The Pro Wrestling Hall of Fame: The Heels. I fired off an e-mail, wondering his thoughts on who the greatest bad guy of all time was.

“There are so many interesting books when it comes to the professional wrestling industry, I wish that I would have had access to as much information when I was a fan. But then again I might have missed the mystic of the regional territory feel. I grew up a firm believer of The Hart Mafia vs. J.R. Foley’s Army! Now it seems that you can find out just about anything online,” he wrote, referring to the battles of the late 1970s and early 1980s between the heroic Hart family and John Foley’s bad guys in Calgary’s Stampede Wrestling promotion.

Benoit also talked about how life on the road had changed in World Wrestling Entertainment.

“We were even warned about our conduct when we are out having a few beers. Sometimes we can get a little rowdy especially when we are overseas. Apparently someone video taped a few of the guys acting up on they’re cell phone and posted it on the internet. So much for privacy.”

With an offer to contact him anytime, via cell phone or e-mail, he said goodbye.

Benoit would talk to SLAM! Wrestling a few more times after that last email was sent in July 2006, but never with me.

The last email I sent to Chris went out on Saturday. I’d e-mailed him best wishes, as I’d heard someone in his family was ill, and that he wouldn’t be appearing at the WWE Vengeance pay-per-view. I also wanted his thoughts on his old tag team partner Shayne Bower, a.k.a. Biff Wellington, who had just died at age 44, down and out in Calgary, after years of painkiller abuse.

Needless to say, I didn’t hear back from Chris, and now I never will.