It’s been 20 years since the infamous (but not first) Hulk Hogan bodyslam of Andre the Giant at WrestleMania III and the WWE decided to make a few extra bucks hocking a re-release of the epic event.

Only problem is that the two-disc DVD set, called the “Championship Edition,” while the event itself was stellar, is a bit light in the “extras” department.

Nothing is drastically changed in the DVD, aside from the theme music for Ricky “The Dragon” Steamboat and Hillbilly Jim. Everything else is how it was originally released, with the odd “WWF” changed to “WWE.”

But in watching this, I realized how far WWE has come in the past 20 years. Several things stood out for me.

For instance, when King Kong Bundy bodyslams and then drops an elbow on Little Beaver, the fans were appalled. Nowadays, if that didn’t happen in a mixed tag team match, it would be rare. 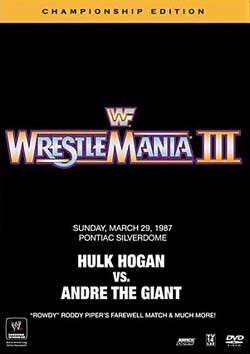 And when King Harley Race topped the late Junkyard Dog, he did it with a belly-to-belly suplex. Again, no dazzling flips or off-the-wall stuff here.

Even when Steamboat and “Macho Man” Randy Savage stole the show with Steamboat winning the Intercontinental title, it was done with a basic inside cradle.

One match that people seem to forget about that had the now-contested crowd of 93,173 on their feet was the six-man tag of The British Bulldogs (Davey Boy Smith and The Dynamite Kid) and Tito Santana against The Hart Foundation (Bret “The Hitman” Hart and Jim “The Anvil” Neidhart) and Danny Davis. This match had a definite storyline as Davis, the former ref, had cost both the Bulldogs and Santana their respective titles over the past year. Just prior to the match, Jesse “The Body” Ventura, a broadcaster for the event, jaunts off with Matilda, the Bulldogs’ canine. No reason was ever given why.

Koko B. Ware and Butch Reed was a pointless match that is probably best known for Santana attacking Reed’s manager, Slick, after the match and tearing apart his wardrobe. Reed had won by reversing a flying bodypress and hooking the “Birdman’s” tights.

Suffice to say, too, that Rowdy Roddy Piper’s “farewell match” versus Adrian Adonis was far from retirement from Hot Rod, though the conclusion of the match did bring us Brutus Beefcake’s barber gimmick.

The Full Nelson Challenge between Billy Jack Haynes and Hercules left Haynes a bloody mess. It’s been noted since then that Haynes was not supposed to blade and the fact he did may have led to his release from the Fed.

The Honky Tonk Man pinning Jake “The Snake” Roberts with a hand on the ropes was a precursor to Jake and cornerman Alice Cooper terrorizing Jimmy Hart with Damien after the match.

Wow, there were once tag teams? The Iron Sheik and Nikolai Volkoff defeating The Killer Bees (B. Brian Blair and “Jumping” Jim Brunzell) by disqualification served as the introduction of Hacksaw Jim Duggan, a wrestler who still performs in the ring pretty much weekly for WWE.

All that was accomplished by Beefcake and Greg “The Hammer” Valentine beating The Rougeau Brothers (Jacques and Raymond) was that Valentine spurned his Dream Team partner after the match and hooked up with Dino Bravo. Lots of Canucks in this match, too.

The Hogan and Andre match – it is what it is. Either you love it or you wanted more. Personally, if that match doesn’t happen the way it did, I don’t think WrestleMania is what it is today.

If there was a theme with each match, it’s that most of them ended a feud, started another, or segued into another storyline i.e. Beefcake, Duggan, new Dream Team.

As for the extras, there’s an OK assortment — just a slew of pre-WrestleMania interviews (some with Ken Resnick, remember him?) and run-ins and a couple matches (including the battle royal from Detroit that Hercules wins) from Saturday Night’s Main Events that led up to WrestleMania. A second version of the pay-per-view features pop-up trivia facts during the matches. A nice touch, but I don’t think we need to know where Aretha Franklin was raised.

All in all, I think diehard fans would want to own this, but just know that it’s nothing special; it’s just the event on DVD.

Basically, buy it so you know you have a copy of the first great WrestleMania.

Matt Mackinder was only eight years old when WrestleMania III came to Pontiac, now his hometown. How old were you when Hulk slammed Andre and where were you on that night?