In 2006, WWE and Topps made a big impact in the trading card market. That trend looks to continue into 2007, if Heritage Chrome II can be held as a sample of what’s to come.

Like the previous series, Heritage II Chrome takes the Heritage II line to new levels with a thicker stock and intense graphical enhancements. The cards have a thick ultraviolet coating that gives each piece a slick look, one that you can’t help but stare at.

Part of the excitement over the set can be attributed to the introduction of a few first-time cards. Due to roster moves in the Fed, some of the wrestlers, such as Kurt Angle, had to be pulled from the new set’s checklist. In creating the new set, Topps made some absolutely superb selections, especially when it comes to focusing in on ECW’s best. Among the wrestlers making their cardboard debut are Sabu and CM Punk, which will definitely draw in new collectors from the old ECW as well as indie chasers.

Perhaps the most intriguing additions are the McMahon family. Vince, Linda, Stephanie and Shane are all included in the set, which, if you really think about it, is a great decision by Topps, given the involvement each has had on WWE TV. 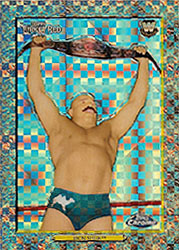 The last addition to the base set is a move by Topps to take the Turkey Red insert set from the first series and move it to the second series base set. Not only does this give collectors the opportunity to see these very popular cards in a new light, but also gives them increased odds at pulling one. Props must also be given for changing up the photography.

Also included in packs and boxes of Heritage Chrome II are Refractor, X-Fractor and Superfractor cards. These parallels, which come out around six per box, give the chrome cards a rainbow finish and enhance the look of each card. The pulls are at a decent enough rate that you won’t have to spend too much to get one.

Of course, the biggest chase for collectors will be the autographs and event-used mat cards. Each has its own distribution line, with the autos coming out of hobby packs and the mat cards in retail boxes. This time around, Topps not only included the hottest Divas (including our second Mickie James auto), but also a few of the ECW originals like the aforementioned Sabu. This was a great move by the company, ensuring that no collector would go home unhappy.

The event-used mat cards, unfortunately, may be overlooked due to their retail-only streaming, but in hobby terms that’s not a bad thing. After all, if a card isn’t as plentiful on the secondary market and there is a demand for it, the value will only increase.

Once again, props go out to Topps for creating a beautiful set that