A rare case of jitters for Duke Myers

Here’s a news flash — something actually intimidated Duke Myers. As he stood before the Cauliflower Alley Club reunion in Las Vegas last month, the long-time heel stopped spinning yarns for a second, looked out at the brotherhood of wrestlers, and confessed, “I’m nervous.”

The jitters lasted just a few seconds and soon Myers was back to form as the legitimate tough guy who spent the better part of a quarter-century beating up opponents across North America and Japan. But the incident showed that the Oregon native really does have a soft side. 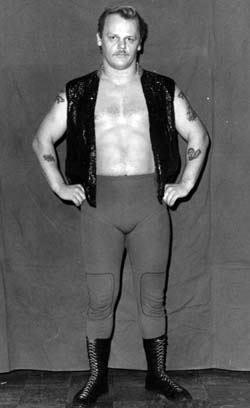 “He is probably one of the toughest, meanest, yet kindest guys I ever knew in this business,” said Scott Casey, who trained under Myers and introduced him at the Cauliflower Alley Club banquet. “The thing that always bothered me about him was his smile — whether he was mad or happy, you never knew which direction he was going to go.”

Myers won’t quarrel with that description — he admitted that he showed some of that tough love to Casey by repeatedly bodylamming him during training sessions on rock-hard ground in Texas. Get to know him a little bit, and he’s alternatively affable and ribald, and always ready to talk about his golf game.

But facially and physically, he reminds fans of WWE star Kane, another oversized mat meanie who portrayed a decidedly fan-unfriendly character. Myers confided he’s not a social creature by nature and, after enduring years of indignities from antagonistic fans … well, yeah, he doesn’t mind looking a little mean.

“I got to where I totally disliked people. I’m a heel all the way. It fits me well because I’m not a sociable person,” he said. “It’s taken me a long time to go out and socialize. You get bored with people. They try to shoot you, they try to knife you, they do everything they can. It gets boring … you can’t go some place without a guy that weighs 103 pounds trying to take you out.”

Though he’s been slowed in recent months by intestinal surgery, very few people could take out Myers in his prime. He wrestled as an amateur in high school before working out with Soldat Gorky, a legend in the Pacific Northwest for his Cossack personality in the ring and his disquieting actions outside of it. Myers worked as a bouncer at a bar Gorky owned and worked wrestling appearances in the late 1960s around his job.

His startup was delayed when he suffered broken vertebrae during a mishap with Gorky in Portland, Ore. “I was going to wrestle him and the commission doctor said he didn’t want me to wrestle with a broken vertebrae.” Myers briefly took his business to Phoenix for Ernie Mohammed, where he found more wrestlers in the locker room than fans in the stands. In Salt Lake City, Myers wrestled as the Russian Angel for promoter Ox Anderson, but he didn’t hit it big until Leroy McGuirk brought him into the Tri-State promotion in 1970, where he spent much of his time in the early part of the decade. “They said he’d pay half-a-million dollars to see me and I thought I’d try to go to collect. Never did,” he cracked — it was well-known that McGuirk had lost his eyesight.

Myers also made a name for himself in the Amarillo, Texas, territory, where he was Western State champ and got in a brass knuckles feud with Dick Murdoch. “I liked Texas. The old man [promoter Dory Funk Sr.] took care of me. I didn’t make a fortune, but I didn’t want to eat too much macaroni and cheese.”

Some of his best work came when Bill Watts, McGuirk’s ally in the Louisiana-Oklahoma-Mississippi area, asked him to dye his hair blond and hook up with Terry Garvin (Terry Joyal). They won the regional U.S. tag championship in 1972, and held the Mid-America tag titles in Tennessee three times the following year. Powerful as he was, he wasn’t immune to the hazards of the road. Myers was out of action for several months in 1973-74 following a single-car accident involving Bob Sweetan and preliminary wrestler George Hulse. Sweetan hit a culvert near Delhi, La., after blowing a tire.

“We were going down the road, and came to the middle of a corner, and we were doing 60 miles an hour, and the right front tire blew. He never had the chance enough to hit the brakes, so we hit the culvert head on,” he said. “We laid out in the ditch for quite a while, about half-an-hour, an hour. Sweetan had two broken feet. I’d knocked the steering wheel down on his feet. I’d hit the windshield and come back and went down on the steering wheel.”

Myers broke his legs and had a steel pin inserted in one; he acknowledged that he was fortunate his injuries were more serious. Back in the ring, he wrestled in the Gulf Coast before settling for good in Calgary for Stu Hart after being shortchanged by a promoter in Hawaii. “Peter Maivia paid me like $75 for three nights work. So I called up Stu Hart. I said, ‘Stu, my name is Duke Myers.’ I told him the story. I said, ‘How’d you like a heel?’ He said, yeah, he needed a heel. I went from 80-degree weather to 32 below. And it was cold, boy, I’ll tell you.” But Myers became one of the top singles and tag stars in the Calgary promotion during the early 1980s. “He was a good worker. He got the job done every night. He was a good guy,” recalled Hubert Gallant.

“Duke was a classic example of what made Stampede Wrestling so great,” Bret Hart added in a 2000 reflection on the territory. “He soon proved himself to be one of the most solid and steady wrestlers ever to work up here.” In addition to the International singles title, Myers held the top tag belts in he territory seven times, usually with Kerry Brown and manager J.R. Foley.

“Kerry was the general and I was the strength,” he said. Myers’ secret weapon was a black glove he donned as a gimmick — fans always suspected he had something hidden in the glove for nefarious purposes. Actually, the glove was a real weapon because he never washed it. “I could make people puke with that glove,” he laughed, recalling a time that he induced Davey Boy Smith to gag merely by holding the stinkeroo over his foe’s face. 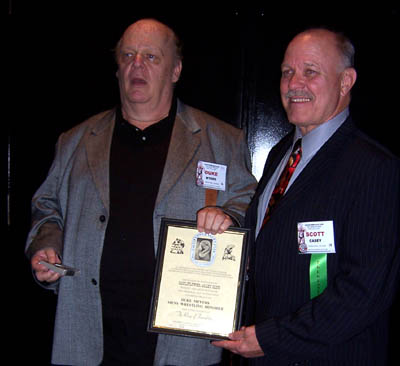 Myers also played a part in entertainer Andy Kaufman’s romp through the Memphis, Tenn., territory in 1982 and 1983, teaming with Kaufman as the hulking Colossus of Death. The memory elicits a moan even today. “That was Jerry Lawler’s idea. I threw fire and all that crap. Lawler had done that all of his life.”

He slowed down in the mid-1980s after Hart spun off the Stampede office to Vince McMahon of the WWE. Now, he and wife Jane reside in Oregon, keeping in touch with a bustling family that includes three children, six grandchildren and five great-grandchildren. “I’m one of the proudest guys there is to be in this business.”