Christian prepares for the Cage

This Sunday, the men and women of Total Nonstop Action will step inside the confines of a six-sided steel cage for the annual Lockdown pay-per-view.

Though confined to the small space that is the wrestling ring, most of these heroic individuals will at least have the comfort of knowing they can look up and see a chainlink-free area in the otherwise meshed zone that they do battle in. 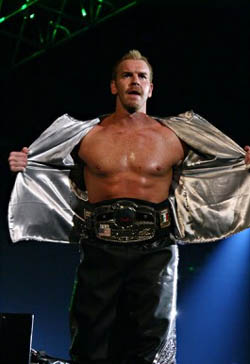 The above scenario, however, does not apply to all of the weekend’s participants. Ten men will not have the luxury of seeing the roof of an arena above them. Instead, they are fully trapped without any method of escape.

One of these men is Christian Cage, the NWA World Heavyweight champion. Cage, known in his civilian life as Jay Reso, leads a troupe of five men into battle against his enemies, lead by Kurt Angle.

For Cage, the threat of being sealed off from the outside world is not of concern as he goes out to entertain his peeps, despite this being his first time being in a match where he’s sealed off on all sides.

“I don’t see it as being confined,” he told SLAM! Wrestling during a conference call Thursday. “It’ll definitely be a different animal. I’m looking forward to getting in there and putting on an entertaining match.”

What could be a concern, however, is the threat of injury, which is always a possibility when there are so many combatants within an enclosed area, be it a cage or a normal ring.

“There’s going to be bodies flying everywhere,” he said. “You definitely have to be aware of where you are at all times, and that’s the hard part, when you have so many variables in a match.”

While Cage has not taken part in the Lethal Lockdown match (he fought Abyss at last year’s event), a number of his cohorts have, or in the similarly-concepted War Games, which was a hallmark bout in World Championship Wrestling. In preparing for his match, Cage admits that he has not sought the advice of his predecessors, thought he plans to study up on the format before entering the PPV.

“I haven’t really talked to anybody about it, to be honest,” he said. “In the next couple days, I may get a copy of the last Lockdown and watch the match, get a feel for it that way.”

Cage’s team includes Tomko, Scott Steiner, A.J. Styles and Abyss. On the other side of the ring will be Angle, Sting, Rhino, Samoa Joe and a returning Jeff Jarrett.