A stunning premiere for Stone Cold

TORONTO — Lights, camera, Stone Cold action! The night of April 11 was the scene of the Canadian premiere for Steve Austin’s first feature film, The Condemned. The atmosphere at Toronto’s ScotiaBank Theatre was absolutely electric as fans, media, and celebrities all braved the howling winds to catch a glimpse of Hollywood’s newest action star.

Before The Rattlesnake arrived, Austin supporters were kept entertained through various contests and local celebrity cameos.

On the musical side of things R&B singer and Vancouver native Cory Lee was chatting it up with reporters, promoting her new album Sinful Innocence, which debuts May 15. Hometown rapper Choclair also made an appearance, and turns out to be an old school wrestling fan. The hip-hop artist’s all time favourites include Ricky Steamboat and Abdullah the Butcher. 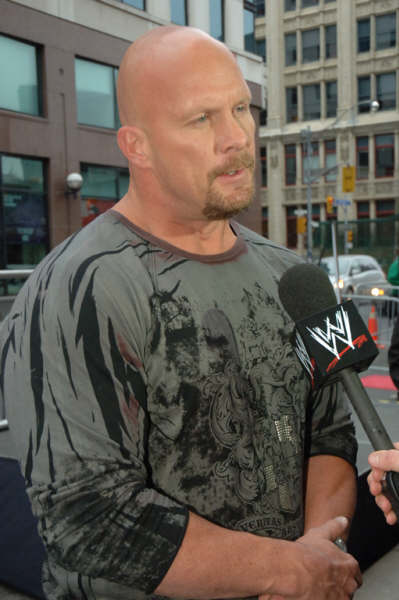 “Stone Cold” Steve Austin in Toronto on April 11, 2007 for a screening of his new movie, The Condemned. Photo by Mike Mastrandrea

The CFL was well represented as current Toronto Argonaut, Adriano Belli, walked the red carpet to show his support for the movie. A nice surprise (especially for fellow SLAM! Wrestling writer Bob Kapur) was former Canadian Football League standout and wrestling legend Angelo Mosca popping by. The still impressive Mosca has slowed down with age, but was as charismatic as ever while schmoozing with the press.

Speaking of the press, they were out in droves as cameras from Entertainment Tonight Canada, The Score, TSN, and City TV, to name a few, were all jostling for position in media row.

As the mob was beginning to become restless, a sparkling silver limousine pulled up, and then there was the sound of shattering glass. Accompanied by WWE Canada President Carl DeMarco, “Stone Cold” Steve Austin emerged from the vehicle delivering his trademark double-arms-in-the-air pose. The reaction from the fans in attendance nearly blew the roof off of the ScotiaBank Theatre, and Austin was in genuine good spirits while signing some autographs.

The Rattlesnake addressed the crowd, speaking about the film’s story and even cracked a few jokes. When asked about working with Donald Trump at WrestleMania 23, Austin commented that The Donald was fun to work with but, “doesn’t take the best Stone Cold Stunner.” Austin then moved on to media interviews where he was pleasant, thorough, and engaging in his responses.

Austin explained that it took him some time to get over the glitz and glamour of a live wrestling audience in favour of movie making. “When you’re in the ring you feed off of the crowd’s response and get instant feedback. On the set it’s a lot quieter so you go more by instinct and have to go by the director’s guidance.”

Stone Cold then told SLAM! Wrestling that it took him many months and hundreds of scripts before he decided that The Condemned was the film to go with for his first starring role. Its action scenes, storyline, and how the director (Scott Wiper) catered the main character to Austin is what made the flick standout. Austin was also pleased in how Wiper gave him plenty of creative input in regards to fight sequences and his own dialogue.

SLAM! Wrestling was also fortunate enough to be able to tag team its media scrum efforts with Live Audio Wrestling co-founder Dan Lovranski. The LAW was able to capture some great audio from Austin and that will be aired this Sunday on their radio program. Stone Cold was surprisingly candid when addressing the question on his rumoured match with Hulk Hogan at WrestleMania.

Austin believed that their two styles wouldn’t mesh in the squared circle, and that if he did have a last match he would want it to come off spectacular. “I give Hogan credit for what he accomplished in his career and what he did for the business, but don’t think too much of him other than that,” he said. Even competing in the ring again seems unlikely at this point as Austin stated he would need at least 34 months of dedicated preparation to be at the high level he expects of himself.

Following the blitz of questioning it was go time, and Austin put it best by bellowing out, “It’s great to be here in Toronto, now enjoy the damn movie!”

At the conclusion of the action thriller, a surprise Q & A session was held in the theatre where Stone Cold took on all comers. Austin was more than generous with his time and on numerous occasions waved off his PR people in favour of spending more time with his fans.

While the majority of the questions were fluff and became repetitive, there were definitely some points worth noting. Naturally, one last title run was brought up, but Austin said that the TV time belongs to those “busting their asses on the road each night” and that a championship reign would be bad for business. He also gave kudos to John Cena’s job as champ (which was met by a chorus of boos), and how The Undertaker just keeps getting better.

As for possible dream matches, The Rattlesnake reminisced on his classic battles with Bret Hart and The Rock, stating that he would love to have another go with those two. Not surprisingly these legends were also included in his favourite career moments: WrestleMania 13 with Hart, and WrestleMania 17 versus The Rock. Austin also gave praise to Ken Kennedy on more than one occasion, and said that Kennedy would be his top choice if he could wrestle anyone on the current roster.

As far as keeping in touch with old wrestling pals, Austin said for the most part he sticks to himself, but remains close with a select few. Kevin Nash and Diamond Dallas Page are good friends, and, of course, so is good ol’ J.R. “I am so grateful to Jim Ross over the years. He was the one who helped me patch things up with Vince recently for this movie deal. J.R. is a great announcer, and a great friend to a lot of people in this business.”

Austin tried to keep the questions movie related whenever possible, citing John Wayne and Charles Bronson as influences for his acting career. He laughed when asked if he needed any training on the firearms used in the film. “Son I grew up in south Texas, guns were a part of growing up. I came in, fired the guns once in training, and walked out.”

Austin also made it clear that he didn’t want to do anything wrestling related in this or any other project he is involved in. “I want to separate the Stone Cold persona from the actor.” It was also surprising to hear him say that being seen only as an action hero or a tough guy was not at all a concern. “Look, if I’m lucky enough to make 30 action movies then I don’t care about being typecast!”

At the end of the session Austin took a sentimental moment to thank all his supporters over the years. He made special note of everyone sticking by him through the major neck injury of 1996, and the fans cheering him back to the top spot during his comeback.

Andy McNamara has been writing for SLAM! Wrestling since 2005 and especially enjoyed the free food in the VIP room at the movie premiere!