Some conventions are big, some are small, and some are “Classic.” Such is the case with Terence Brennan’s latest endeavor, Legends of the Ring 4, which is themed towards the Classic Superstars action figure line.

Since his last convention in October 2005, Brennan has taken a break from doing the supershows he became known for. He began working with friend, Bud Carson, organzing small autograph signings out of Carson’s store in Allentown, PA. In particular, Brennan brought in One Man Gang/Akeem (George Gray) for a Classic Figure signing. The signing was met with a huge response and put the wheels in motion for Legends of the Ring 4.

In 2006, Brennan announced a Wrestlemania 3 convention to take place in Detroit during the Wrestlemania 23 weekend, but plans did not pan out. “There were too many hurdles and obstacles to overcome, and if you can’t do something right, don’t do it all,” Brennan said.

But instead of throwing in the towel, Brennan refocused and recommitted himself, adopting the Classic Superstars theme and announcing Legends of the Ring 4. It takes place on April 28, 2007 at the Radisson Hotel and Conference Center in Carteret, NJ. 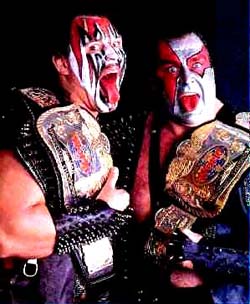 “This show is themed on the Jakks Classic Superstar line as I booked a lot of the guests for the fans to have the exclusive chance to get some of them (Classic Figures) signed,” Brennan said. “When I look back at my list, most of my top bookings have all panned out which is something that hasn’t happened in past shows.”

While on the subject of previous conventions, Brennan guarantees that this convention will not only be bigger and better than the rest, but also more organized, “This (Legends of the Ring 4) is a lot bigger and a lot more organized. I brought in a partner on this venture, James Soubasis from 3 Count Promotions. We have worked together for the past 10 years on and off and had a huge run doing appearances in the glory years of 1996-1999. I have also developed a huge fan base of loyal supporters over the years.”

Recently, the convention suffered two losses, with the deaths of scheduled guests Bad News Brown (Allen Coage) and “The Big Cat” Ernie Ladd. Upon hearing the news, Brennan posted on his message board that he would work something out for the fans, but said that in no way, shape or form could those men be “replaced.”

Brennan was able to secure Chris Jericho to take over as a Super Ticket guest. “Once I decided that I wanted to do some appearances, I got a lot of calls in a couple of weeks. I am really looking forward to being a part of (Legends of the Ring 4),” Jericho told SLAM! Wrestling’s Jason Clevett. “I have never done one before and am open to doing new things like the fanfest. The most important part to me is sitting down and saying ‘hi’ to everybody I haven’t seen in a few years. It is good to get back into the groove of things and talk to fans. It should be cool.”

When reflecting on his selections, Brennan did mention a few appearances he is looking forward to. “I like the rare guests that have never done anything like this before. For me the highlight of the show will probably be the Bill Eadie – Barry Darsow reunion.”

Demolition, which reunited at a show on WrestleMania Sunday in Windsor, Ontario, live in different parts of the country — Eadie in Georgia, and Darsow in Minnesota — making it hard to team up for events. “We haven’t had a chance to get together for an event like this before because Barry has his own schedule and I do to,” Eadie said at the Windsor event. “We don’t really actively wrestle anymore. We both enjoy the aspect of the signing, and seeing the guys. Meeting the fans and talking to the fans is great. We’ve done signings and stuff before but not together.

The main question being asked of Brennan however is, What makes this show so much different from the others he has done? Brennan’s answer is simple: “The diverse talent lineup, the value of the show and the once in a lifetime chances the fans have to meet some of these guests make this show the biggest one I have done to date.”

As for what fans can expect from Legends of the Ring 4, “Organization, value and quality,” Brennan said. “Show up, have fun and take advantage of the rare opportunities we provide the wrestling fans in meeting the superstars they grew up watching.”

— with files from Jason Clevett