How good is it? The special two-hour feature documentary is honest at times, and very honest at others. 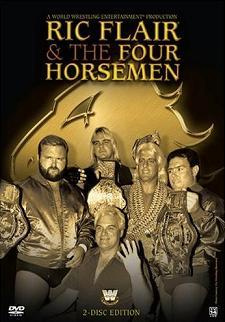 “Embarrassing, no talent, bad attitude, never should have been there,” Ric Flair comments on Sid Vicious’ entry into the Horsemen, concluding on-camera, “Put this on the DVD because that is how I feel.”

The first 45 minutes of the main documentary center around the formation and the original Horsemen in 1985 consisting of Arn and Ole Anderson, Tully Blanchard, Ric Flair and manager James J. Dillon. All but Ole is there to comment.

Surprising was the appearance of James J. Dillon, who had left the WWE on bad terms in 1996.

No one of the original group is spoken badly of, including the missing Ole. The original name was coined by Arn Anderson during a televised interview, but sadly the footage is not shown. Some of the Crockett-owned NWA footage at the time was taped over years later when the company was making cost cutting measures.

Cheap shots are the sign of any WWE DVD, and this one is no different. Jim Ross refers to the Ric Flair’s reign as NWA World Champion by saying, “That is when the NWA belt meant something.”

When Ole left, Lex Luger was introduced. Arn and Flair spoke the obvious about Luger. They expressed that he had a great look but was green and they ended up teaching him how to work in the ring.

Jim Ross, whose mistake-prone comments have been the joke of other DVDs, seems to think the WWE has been perfect when noting, “The NWA thought Luger could be their version of Hulk Hogan, and it never worked.” (Fast forward to 1993 and the WWE is in the middle of a steroid scandal. Hulk Hogan has left the promotion, and Vince McMahon calls on Lex Luger to be the replacement for the Hulkster as the big name for the promotion. It failed.)

Much detail is put into the departure of Arn Anderson and Tully Blanchard in October of 1988. Pay and a strained relationship with Jim Cornette are mentioned as two motivating forces.

The relation between Flair and Jim Herd, who was head of WCW (the new name for the Jim Crockett Mid-Atlantic promotion) when Turner took ownership, is no secret. And Flair using his DVD time to vent on Herd makes for an entertaining moment on the DVD.

When Tully and Arn’s contracts with the WWE were up, the original Horsemen were planning to reform in WCW (minus Dillon as manager who by this time was working backstage for the WWE). Blanchard speaks honestly about how a failed drug test in the WWE led to the end of his full-time wrestling career.

Although it is spoken of quickly the Horsemen were put on hold when Ric Flair left for the WWE in 1991. Flair and Arn comment how when Arn came back, it did not last long because Flair left right after. In fact, it was one and a half years between when Arn and Flair were back in WCW together.

Dillon’s comments about how Flair’s stay with the WWE was disappointing were surprising left in, especially when he commented the obvious “McMahon only liking his own creations.”

When the Horsemen reformed in 1993 with the return of Flair back into WCW, Paul Roma was announced as the newest member alongside Flair and the Andersons.

Maybe the most shocking moment of the whole documentary is when Roma appears on the DVD to talk about his time with the Horsemen, noting, “Did I fit in? No.”

Triple H appears to talk about his shock when seeing Roma, calling Roma a “jobber.”

Roma comes across as bitter, by calling Flair “97 years old” and Arn a “Pillsbury Dough Boy.”

Flashes about the stabbing incident between Vicious and Arn are mentioned along with the Arn Anderson-Ric Flair feud from 1995. Flair and Arn talk about their choices for the Horsemen in the late 1990s, and which choices were WCW’s.

Eric Bischoff, who was in charge of WCW during this time, appears to defend decisions made during the time, including the nWo mocking Arn Anderson and the 1998 lawsuit with Ric Flair.

The last incarnation of the Horsemen disbanded when Chris Benoit and Dean Malenko left for the WWE and Steve “Mongo” McMichael retired due to injuries. Arn and Flair speak about how they wish the group ended on a better note.

A second disc is included with interviews, matches and angles throughout the span of the different incarnations of the Four Horsemen. Although not perfect, it displays a good variety throughout the 15 years of the Horsemen.

The main documentary will be argued as maybe the best the WWE has released. Detail, honesty and stories make this DVD set a must for anyone who was a fan of the Horsemen. No Horsemen is left out, and although facts are not always correct, it is pretty accurate.

It becomes, in short, a history of the NWA and WCW because of the members’ high profile spots with the companies.

The WWE understood in making the documentary that most fans want to see the originals, which makes it unclear why Barry Windham and not Ole Anderson is on the cover photo.

If there ever was a History of Pro Wrestling class, this DVD set would have to be part of the curriculum.

Perhaps Dusty Rhodes could be the professor. After all, Rhodes asked Ric Flair for admission into the Four Horsemen at the 2007 WWE Hall of Fame ceremony. Flair’s response? A raised four fingers, the symbol of the Horsemen.