Not a lot of dirt in Sammartino & Koloff bios

The careers of Ivan Koloff and Bruno Sammartino are very much intertwined. Bruno was Koloff’s idol, and he faced off against him in Pittsburgh in his first match away from southern Ontario. In 1971, Koloff was chosen to dethrone Sammartino after a seven-year run as WWWF champion. They’d battle countless times through the years. And now they both have autobiographies out. 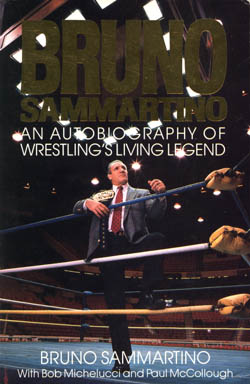 Bruno Sammartino: An Autobiography of Wrestling’s Living Legend came out in 1990 (Imagine Inc.), written by Sammartino, with Bob Michelucci and Paul McCollough. It’s a tough book to find, available really only through used bookstores. (This writer found a copy through ABEbooks.com and its search mechanism for just under $40 Cdn.)

“Is That Wrestling Fake?” The Bear Facts has just been put out by co-writer / publisher Scott Teal under his Crowbar Press imprint. It’s not available in bookstores either; instead, one has to head to Teal’s website or Koloff’s to order.

Despite the 16 years between the publication of both books, there are a lot of similarities.

For one, neither legend is out to slag people. “I prefer to tell the negative stories about myself, instead of knocking everybody else,” writes Koloff. “If you anticipate reading gossip stories about other wrestlers, then you will be disappointed.”

Bruno also takes the high road, but then that’s a lot easier when you pretty well stay within kayfabe throughout. The titles of the books could easily be switched, as Bruno goes to great ends to defend his profession, including a couple of memorable rants against the news media. “One issue that really bothered me throughout my career was what newspaper writers would say about wrestling,” Sammartino writes. “The ink never varied, be it in Pittsburgh, New York, Boston or San Francisco. The sports scribes would tell their readers that all wrestling matches are rehearsed. They’d write that wrestlers spend the time before their bouts in the dressing rooms, practicing what moves they’re going to use on each other.”

Besides the rants, the two-time WWWF champ tells a good yarn, particularly about growing up in Italy and surviving the Second World War, holed away in the mountains. He shares good road stories, and offers a little insight into his own life. Surprises abound, like his love for opera. 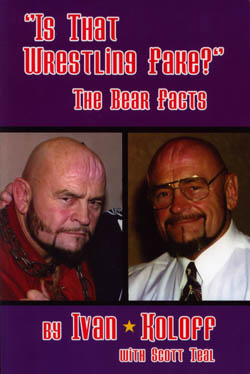 His descriptions of his opponents is almost paint-by-numbers. On Ernie Ladd: “For a large guy, he was strong, well-coordinated with good speed.” On Ken Patera: “He was incredibly strong and let’s face it, by the time I had reached my late 30’s, I had lost a step or two.” On Dominic Denucci: “He’s just a super guy, a great wrestler and we’ve remained friends to this day.”

Koloff’s tales of his colleagues are a little more colorful, with adventures in the ring and away from it the focus. With Ernie Ladd, he tells of a riot in Montreal; with Bob Backlund, he raves about his strength through examples. Close friends like Dale Hey (aka Buddy Roberts) and Nikita Koloff get in-depth treatment and really allow a good look into their personalities.

The keeping within kayfabe is at once both quaint and annoying in Sammartino’s book. Take the actual WWWF title change on January 18, 1971, where Koloff beat him:

“I remember I was coming off the ropes and I positioned myself for his counter-move, but Koloff fooled me. He caught me with a knee that cut me on the side of my head. I was dazed badly by the blow.

Koloff rushed at me, scooped me up and gave me a powerful body slam, then punctuated that with a knee drop across my throat. As I struggled to move, Koloff scrambled up onto the top rope and hurled himself down into me, driving another knee across my chest.

As quick as a flash of dynamite, he covered me. As I tried desperately to get up, the referee slammed his palm into the canvas three times. I was counted out. Koloff was the victor and the new world’s heavyweight champion of professional wrestling. He had beaten me for the first time … and that was all it took.”

It makes one ache for more, as Sammartino is one of the most influential and important wrestlers in history. Could there be a real, tell-all one day? Doubtful. (The various misspellings of key names — “Joe Lewis” instead of Joe Louis; “Roy Shars” instead of Roy Shire; “Denny” Hodge rather than Danny Hodge — make an editor ache in a whole different way.)

Fortunately, Koloff is there to fill in the blanks. He shares how he was approached in the spring of 1970 about being the one to beat Bruno, then drop the belt a few weeks later to Pedro Morales. “I would have said something at that point, but I was absolutely speechless,” Koloff writes of hearing the request in person from Morales.

“The fans knew that I had won the title, but they were so stunned by what had happened that they just stood there,” The Russian Bear writes of his WWWF title win. “The referee knew that we were within seconds of having a full-scale riot on our hands, so they wanted me to get out of the ring before anything like that happened.”In a lesser-known incident, Koloff describes a match as champion when Mario Milano seemingly beats him for the belt in front of the TV cameras, where the referee signals for the bell while Koloff is in an abdominal stretch. The bell rings, and Koloff protests, and the referee says that he thought he heard the champ submit, and the bout continues, with Koloff winning. (Insert Montreal Screw-Job comparison here.)

Both Koloff and Sammartino offer up their opinions on the changes in the wrestling business through the years, and share personal details of their own, admittedly, complicated family lives. The reader comes away from both with a greater appreciation of the sacrifices that these men made in their own lives solely for the purpose of entertaining. Sammartino’s brushes with big names like Frank Sinatra and time spent with children in hospitals are given equal treatment.Koloff, in particular, reveals a lot of his missteps along the way, and uses them to show how he found his way back into Christianity. Raised a Roman Catholic in the Ottawa Valley, by his own admission he strayed from what the Bible taught him (including a stint in jail for cattle rustling!). It’s moving, and fortunately, not as over-the-top as the preachings of Bill Watts in his own book. (An Addendum by Blackjack Mulligan, entitled Christian Facts Guidance, is plunked at the back of the book — after the index — for those who seek more direction.)

Both books are worthy additions to a completionist’s bookshelf, despite their differing approaches. Put side by side, they perfectly illustrate the change in the business over the last two decades, the dismantling of the curtain and the raising of reality in an illusory business.