A pull-around with Mad Jock Cameron

In a career which spanned over 20 years, Harry “Jock Cameron” Strickland led a nomadic wrestling life, which took him to dozens of different countries, and many hundreds of different arenas, all around the world. He may not have been as well known in North America as his late tag partner Frank “Black Angus” Hoy, but respect for his work stretches as far as to the great Dory Funk Jr., who was quick to recommend him to Stu Hart, when Stampede Wrestling came a-calling. 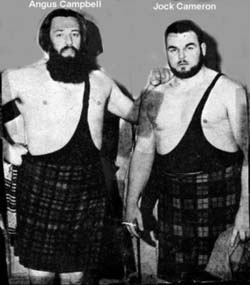 Born in November 1934, Strickland grew up in Lancashire, England, as the son of a fishmonger. Barely finished school, he was conscripted into the Grenadier Guards (the most senior regiment of the British Army) at the age of 18. But even by that tender age, he had already trained in amateur wrestling under Dominic Pye, son of the legendary “Dirty” Jack Pye, who wrestled in England from the 1920s until the ’60s.

“I was heavily into weight training, and was a strong swimmer,” Strickland told SLAM! Wrestling. “When I was 16, Dominic came to our house and asked me to come down to the ring that he had, where the wrestlers trained every week. Of course, it was amateur wrestling that I first learned, but after a while, he suggested giving professional wrestling a go.”

Despite having never contemplated a career in the professional ranks, Strickland took to the pro game easily, finding that his amateur skills provided him with tremendous confidence in the ring. In 1958, he began to accept regular bookings with the likes of Dale Martin Promotions, as well as with Danny Flynn and Fred Woolley, two of the top promoters in the Lancashire area.

In 1960, Strickland was aligned with Frank Hoy for the first time, taking the name “Iron” Jock Campbell, fictional brother of Hoy’s “Wild” Angus Campbell. Though he would later look back on it as a favourite period in his career, he wasn’t enamoured with the concept in the beginning.

“I have to give (promoter) Max Crabtree credit for creating the team. But I remember thinking that lying about being brothers was going to come back to haunt us! In the end, things worked out well because we were together so much. And outside of the ring, without a shred of a doubt, Angus was a great friend, and had a huge influence on me.”

The team quietly wrestled their first match together at a holiday camp in Blackpool, but were so effective that their partnership was soon much sought after by foreign promoters, particularly Selankovic of Germany and Blemenschultz of Austria. Outside of Europe, they also toured South Africa, Madagascar, Mauritius, and Iraq, where a budding wrestler made Strickland an interesting, if bizarre, offer.

“I was in my hotel one day, when I got a call saying ‘There’s a man downstairs to see you, he’s come 60 miles on foot.’ I said, ‘On foot?!’ It turned out that he was an amateur wrestler, who wanted to challenge me. I went downstairs, and this guy was able to look me in the eye, so he was at least 6-foot-2. I said to him ‘I can’t do it for free’, so it was decided I would get £200 ($450CA). He was doing it for his pride, for his people. So we did have our wrestling ‘match’! All I had to do was block him, he had no idea really. He just wanted to be able to say he wrestled ‘Iron’ Jock. I gave him a bit of a show, and it went down very well actually. I was pleased with the money!” 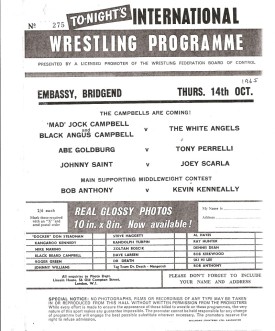 At the end of the 1960s, Hoy left to work for Stu Hart in Calgary, which meant that singles action was again the order of the day for Strickland, now working as “Mad” Jock Cameron. One of his first singles assignments was in Japan, at the behest of Dory Funk Jr.

“I went to Japan twice, when Dory brought me in. I remember him telling us not to take any liberties with the Japanese youngsters, especially since we were being paid good money, and were put up in the best hotels. So we looked after them, and by the time I came back to Japan, they had all learned from the experience, and you had defend yourself in there.”

It was during his time in Japan that Strickland worked with the man that he considers the best wrestler that he ever saw: Lou Thesz.

“Lou Thesz was a great fella. I wrestled him once, and we trained together many times. I remember him saying to me, ‘Have you done some amateur, Jock?’ When I replied that I had, we had a pull-around in the gym. And bloody hell, did he pull! He gave me a compliment and said ‘Oh! You know all the blocking moves!’ and I said ‘Well, it helps you out, doesn’t it?’ So he’d call me every day and we’d go and train.”

Another man that Strickland spent time with in Japan was Terry Funk , an altogether different personality from the gentlemanly Thesz.

“I remember one day I came out of the Hilton hotel with Terry, and we went to the bar across the road. There were some American sailors in there, and the first thing Terry did was go over to them, and punch one of them in the face. The next moment, the whole place was in uproar! But that was Terry, everywhere he went he caused trouble. He loved the publicity, and he lived the gimmick.”

Around 1971, Strickland was invited to work for Stampede Wrestling, having been recommended to Hart by Dory Funk Jr., who had been pleased with his performances in Japan.

“I had so much work in England and elsewhere that I really didn’t need to go to Canada. I remember being in the pub when Stu called me. I said ‘Sure, I’ll come over for a few months’ and he said ‘Goddammit Jock, I need you for at least two years!’ But there’s no way I could have left the wife and kids for that long. And that’s how I missed Canada.”

A year later, on a trip to Kuala Lumpur, Strickland began to consider life after wrestling. He was now 38 years old, and in his current line of work, was finding it difficult to find health insurance back home.

“I met a lot of Americans in Singapore who had seen me work before, and they always asked if I was going back to England. I was thinking about my future, and when I was offered work in the oil fields, I took it, and lived here with my family for seven years. Of course, when the promoters found out I was here permanently, they offered me work for two weeks of every month. So I was able to keep wrestling throughout that whole time.”

In 1979, Strickland received a letter from Pat “Bomber” Roach, encouraging him to return to England, where there was an abundance of work for a man of his size. Although he did move back to his home country, working many bouts with Sean Regan, he soon made the decision to retire from in-ring competition.

“My last match was with Billy Robinson, in Birmingham. He came up to me and said ‘You’re an old pro, you know how to block?’ and I said ‘Yes, and I’m gonna block you tonight!’ I don’t need to tell you that Robinson was a great wrestler.”

Twenty-five years on, Strickland maintains a connection with wrestling by attending the annual British Wrestlers’ Reunion at Wayne Bridges’ pub, near London. He also shares a friendship with Les Thornton, having discovered that Thornton lives within traveling distance from his daughter, in Canada.

“I had been going to Canada for 10 years to see my daughter, and had no idea that Les was here, until Angus told me. So the next time I went over, I told my daughter ‘There’s a pal of mine over here, we’ve got to find him!’ And we did, just by looking in the phone book!”

“I can’t grumble about my life,” Strickland concluded. “I enjoyed wrestling, and I got to see the world and make good friends. I worked with men like Lou Thesz and Andre the Giant, and had the best time of my career teaming with Angus. I wish I could go and do it all again now!”