When I saw that the new DVD release WWE Unauthorized was being billed as the “totally unofficial and uncensored” story, I was hoping that it would be a shocking in-depth expose of the most salacious of scandals that the subject company wants to bury. What it was, however, was a superficial glimpse of some of the events that most wrestling fans are simply tired of hearing about. 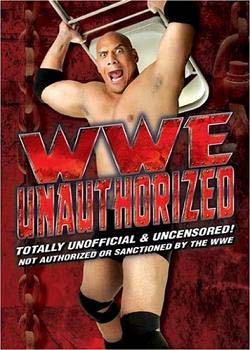 The DVD’s early portion runs down the life of Vince McMahon, including comments author Shaun Assael (Sex, Lies, and Headlocks) and WWE legend Tito Santana. The cartoonish style of the ’80s is discussed at length, as is the rise of Hulk Hogan, the Rock and Wrestling Connection, and the birth of Wrestlemania. It’s nothing that even the most casual of wrestling fans don’t already know, and most of it is glossed over with little insight worth mentioning.

In addition to Santana, Cindy Bobcat talk about the life of a WWF superstar during this era. I know what you’re asking: who the heck is Cindy Bobcat? Apparently, she was the first female WWF Hardcore Champion. I looked that up on Wikipedia — if that’s indeed the case, they don’t know about it either.

In any event, the two discuss how there was a lot of backstabbing going on, both backstage and even in the ring, as people fought for their spots. No details are provided however, so this isn’t nearly as interesting as it could be.

Same comment applies to the brief commentary on the life that wrestlers face on the road — the injuries, the psychological burnout, and the use of painkillers.

The DVD goes into some further details about the steroid scandal of the ’90s that saw Vince McMahon charged with distribution, and his eventual acquittal. Again, nothing new learned here. From there, the DVD quickly details the Monday Night Wars, the Attitude era, Stone Cold Steve Austin, the heightened focus on sexy women, and the ascension of The Rock to the top of the wrestling mountain. None of it is particularly compelling, and it’s as if rather than do any research, the producers opted to do a surface summary of what happened during what was wrestling’s hottest period.

The few topics covered with any depth are the infamous Montreal Screwjob and the tragic death of Owen Hart. Author Eric Francis (Broken Harts) and Vince Russo are both brought in to express their views of what happened during these controversies. Unfortunately, any opportunity for intelligent discourse on these subjects is tainted by reporting inaccuracies (for example, the ending of the Survivor Series screwjob match is described as being a pinfall finish), and frankly, by having to hear Russo defend his actions during this time, putting the spotlight on himself instead of the victims.

The disc ends abruptly shortly thereafter, essentially ignoring everything that happened in the past seven years. Not that I would have expected anything stellar had the disc continued; but even a fleeting mention of the purchase of WCW, the closing of ECW, or the launch of TNA as a competitor, may have helped pad the 60-minute running length, for anyone who looks at that as an indicator of whether a DVD is worth buying.

For many reasons, WWE Unauthorized isn’t.