BOLTON, Ont. — What dangers would you expect to encounter in a Death Match? 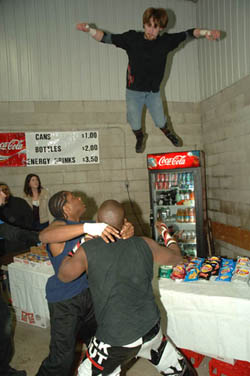 Bishop uses the drink fridge against Ruckus and Lionel Knight at the UWA Hardcore King of the Death Match Tournament. Photo by Mike Mastrandrea

The Mississauga, Ont.-based promotion returned to its old stomping grounds at the former UWA Arena in Bolton, Ont. for a night of seven violent tournament matches to the delight of its bloodthirsty fans.

After it was all said and done, Bishop was left standing with his hand raised in the air, beating promotion-pioneer Osiris in “No Rope Barbed Wire Scaffold Death Match.” Bishop proclaimed that this was the end of hardcore wrestling in UWA.

Despite Bishop’s promise, this may only be the beginning of death match tournaments for UWA.

In 1991, Onita faced Tarzan Goto in the first ever “Exploding Barbed Wire Cage Death Match.” This historic bout is said to have launched the death match craze in Japan.

The show was a huge financial success for the company, though the bouts have not stood the test of time — the most memorable of which was the semi-final match between Cactus Jack and Shoji Nakamaki where barbed-wire boards and beds of nails were the weapons of choice.

When it was all said and done, Cactus Jack won the tournament, beating Terry Funk in a lackluster “No Rope Barbed Wire, Exploding Barbed-wire boards, Exploding Ring Death Match.”

After leaving ECW and founding IWA Mid-South, Ian Rotten promoted the first American KoDM tournament in 1997. He would go on to the event, beating Axl Rotten in the finals in a “No Rope Barbed Wire, Electrified Light Bulb Death Match.”

Since then, promotions such as CZW, Big Japan and the now-defunct XPW have all held KoDM tournaments.

Death matches have continued to be promoted since in independent and backyard wrestling promotions. In December 2005, TNA promoted a “Barbed Wire Massacre Match” between Sabu and Abyss. This was the first live barbed wire match in pay-per-view history.

The heyday of the death match has long passed. In North America, it will probably never reach the levels of popularity it achieved in FMW in the ’90s. But if UWA proved one thing with their tournament, it’s that death matches are still alive and kicking, and have their devotees.

UWA 2007 King of the Death Match Tournament results and thoughts:

1. Quarterfinal: Osiris vs. Asylum in a “Four Corners of Pain Death Match.”

Each corner of the ring contained a weapon — a barbed-wire board, a nail board, a sheet of glass and a fan with the blades exposed. Both wrestlers are attached at the wrist with a strap. This was a decent choice for a KoDM tournament opener; it featured some pretty sick spots to get the crowd going. Asylum looked close to victory after powerbombing Osiris into the fan and dropping him head first into thumbtacks. Osiris managed to comeback and secure victory with a modified T-bone suplex off the tope rope through the sheet of glass.

2. Quarterfinal: Ruckus vs. Lionel Knight in a “Ladder Death Match”

Pretty fun and brutal ladder match here. It started out with a lot of flipping around before they busted out the ladders. At one point, Knight laid Ruckus on a ladder and went up for a swanton, but Ruckus moved. Ouch. Bishop ran in and tried to cost Ruckus the match, but to no avail. Ruckus won after pushing Knight off a ladder to the outside and he was unable to continue. Decent match, bad finish.

3. Quarterfinal: Bishop vs. Mickey Knight in a “Stairway to Hell Death Match”

Hanging above the ring was a spool of barbed wire and a boxing glove with thumbtacks and barbed wire stuck on it. The goal was to climb a ladder to retrieve either weapon. Not the best match here. Mickey managed to secure the glove and carve up Bishop’s stomach like a thanksgiving turkey. When victory seemed to be within his grasp, his brother, Lionel, ran in and attacked him. The ending saw Bishop deliver a springboard double stomp on Mickey, who was sandwiched between both rungs of a ladder.

Do you remember all the silly weapons mentioned earlier? The UWA fans are the ones to thank as they provided the weapons of mass destruction for this bout. This was a fun match, helped by all the wacky tools. Finish saw Jabroni deliver a Code Red off the ring apron, through a fluorescent-light-bulb-covered table.

No barbed wire or glass here, just an old-fashioned wrestling match. Nothing too spectacular, but there were some nice exchanges. Prohibition retained his title with a double-underhook piledriver.

6. Semifinal: Black Jabroni vs. Osiris in a “Texas Death Match”

Definite match of the night honours deserved here. From bell to bell, this was just nuts. Osiris started out strong, using the numerous barbed-wire boards to his advantage and delivering a belly-to-back suplex on a cactus plant. Osiris then broke out the lighter fluid and began spraying it all over Jabroni’s back. This isn’t going to be pretty. He then filled his mouth with the fluid and, using a lighter, blew fire at Jabroni who instantly ignited! Jabroni started running around the ring in a panic, but Osiris caught him and delivered a Death Valley Driver through a barbed-wire board! Holy crap! Surprisingly that only got a two count.

Jabroni mounted a comeback and sandwiched Osiris between two barbed-wire boards. He then delivered a springboard legdrop onto Osiris, followed by a quebrada. Osiris fought back, delivering a vertebreaker into a barbed-wire board and then headed under the ring, only to emerge with a weed whacker. He whacked Jabroni in the stomach and then powerbombed him over the top rope, through a table covered in glass. Insane! That match should have been the main event.

7. Semifinal: Ruckus vs. Bishop in a “Capture the Flag Scaffold Match”

Two scaffolds are set up on opposite ends of the ring. They are connected by a pipe that hangs over the ring. There are three flags hanging on the pipe, the goal is to grab your opponents flag and the middle flag. This match was doomed from the get-go. For starters, they had to follow the last bout and to make matters worse the roof was way too low to jump off the scaffolds. They had to resort to just falling off. With the help of Lionel, Bishop managed to capture the two flags necessary to win. Not much here.

8. Final: Bishop vs. Osiris in a “No Rope Barbed Wire Scaffold Match”

This was solid death match and a good way to finish the show. They did some pretty sick stuff with the barbed-wire ropes, including a suplex spot that sent both men tumbling over to the outside. Bishop and Lionel double-teamed Osiris, including a powerbomb into the ropes and a double brainbuster through a sheet of glass. Osiris managed a comeback, even powerbombing Bishop through a flaming glass table, but in the end the numbers game was too much. Bishop won with a legdrop off the scaffold through a table.

Winner and King of the Death Match: Bishop

Pretty fun show and worth checking out the DVD (when it’s released) just for the “Texas Death Match.”

Neil Springer is a budding journalist from Toronto’s Centennial College slaving away for the draconian taskmasters of SLAM! Sports as an intern at Canoe.ca.