WINDSOR – WWE’s press conferences sometimes give fans a chance to ask the wrestlers some hard-hitting questions.

“Do you guys have a secret move?” asked Tyler, age seven.

“With the Divas or other wrestlers?” Carlito questioned back. 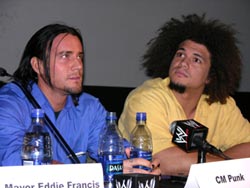 WWE and the city of Windsor, Ont., held a press conference on Friday afternoon at a movie theatre to announce plans leading up to Wrestlemania 23, to be held across the border in Detroit at Ford Field.

With the two cities being linked by a mile-long bridge and an underwater tunnel, Windsor is encouraging fans to experience the Canadian city by holding events and promotions in the week leading up to Wrestlemania, the same way the city tried to capitalize on the Super Bowl in Detroit in 2006. Appearances by WWE wrestlers at local malls, restaurants, movie theaters and train stations will give the local fans an opportunity to not only meet the wrestlers but also have chances to win tickets to Wrestlemania.

Windsor Mayor Eddie Francis said, “We will be co-partners with Detroit in welcoming the world to see Wrestlemania.”

Although the event is expected to be sold out, Francis said many hotels in Windsor are offering accommodations for the weekend with tickets to the event included.

Carl DeMarco, President WWE Canada, was pleased with Windsor’s efforts. “Windsor is an incredible city when it comes to Wrestlemania.”

When it was time for WWE personalities Carlito, CM Punk. Chris Benoit and legend Hillbilly Jim to take the stage, fans in attendance gave them a roaring applauds.

Wrestlemania 23 will mark CM Punk’s first opportunity to wrestle in a Wrestlemania. “I intend to define my career at Wrestlemania,” Punk told the crowd. “Hillbilly Jim talked about Wrestlemania 3, and how his match at that show defined his career, and I want to do the same thing.” Punk was talking about the infamous match where King Kong Bundy body slammed and gave an elbow drop to Jim’s midget partner Little Beaver.

Carlito joked to the crowd about how large this year’s Wrestlemania will be. “96,000 tickets have been sold, the buy rate will be 3.5 billion people and people from 72,000 counties will come to see it.”

Wrestlemania will become the largest gate in WWE history when all tickets are sold with an estimated 78,000 people expected totaling over $5 million in ticket sales. Fans are expected from all 50 states and over 20 countries.

Bob Collins from WWE’s marketing department gave the fans hope for finding tickets to the event. “Tickets will be released in the months leading up to Wrestlemania and we are working with Ford Field to open up standing room only tickets.”

“We want to set the all-time attendance record at Ford Field at Wrestlemania,” he said. Collins also noted that Wrestlemania 3 remained the largest crowd to ever see an event at the Pontiac Silverdome, which is an hour north of Detroit. Although still standing, the Silverdome has sat largely unused since Ford Field opened in 2002.

Opening up standing room tickets will allow for Wrestlemania to be the largest event held at Ford Field. As it stands now, the largest crowd ever at the facility was 78,129 for a college basketball game in 2003.

Collins also announced that tickets for the Hall of Fame Dinner and Inductions would go on sale starting March 3.

After the event, fans were allowed to ask questions to the wrestlers. With most questions being asked by small children, it allowed for some humour.

One young boy asked Carlito, “What is it like to be in the Masterlock?”

Carlito gave a stoned stone stare at the boy, and then replied, “Goodbye, I got a flight to catch.”

March 30 – Listen to AM800 and pick up The Windsor Star for your chance to win tickets to a very special WrestleMania event to be hosted by Windsor mayor Eddie Francis.