PPV DVDs have ups and downs

Amidst the understandable hype of a rash of new bio and documentary DVDs, WWE has released a series of new pay-per-view recordings.

As has always been the case, rather than look at the PPVs again, we’re focusing solely n the extras, and as you’ll see, there are the positives and negatives to each one.

Rating: 2 out of 5 – The Trish interview makes this DVD worthwhile. All the DX footage, inevitably, will be on the new compilation recording for the duo, so you can pretty much avoid all of that footage. 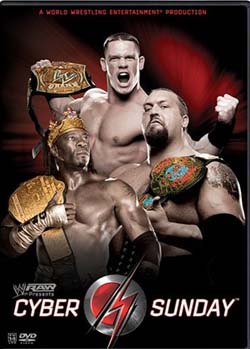 Rating: 1.5 out of 5 – The match is a nice addition and the Umaga/Estrada interview is a good show for what would come for the Samoan Bulldozer, but the Legends/Divas segment is both lame and demeaning to the female wrestlers.

Rating: 3.5 out of 5 – A great nod to history here with a more than decent match from the first Series, but the McMahon cartoon brings it down a notch. The Lita interview is an interesting contrast as she’s allowed to say a bit of her genuine feelings, but for the most part has to stay in character.

Rating: 1 out of 5 – Admittedly, the post-match interviews for the Elimination Chamber are good, but considering the lacklustre PPV presented, there should have been more here. Why not put out an extra disc with a past ECW show like they did for One Night Stand II? The only thing truly noteworthy about this DVD is that we finally see a new PSA after years of video changes to the one we’ve seen for years.