Controversy. It’s a word that can certainly describe a lot of wrestlers or moments in wrestling history, no doubt; yet I had trouble seeing the controversy that supposedly has followed “Rowdy” Roddy Piper.

You see, in choosing a name for the new bio-DVD on “Hot Rod”, WWE chose the title Born to Controversy: The Roddy Piper Story, which, after watching the recording, seemed like an embellishment. 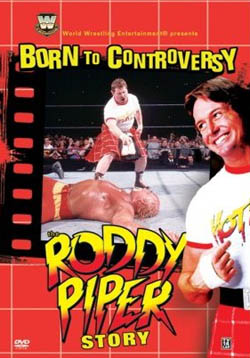 Now by no means do I say this with a thought of the DVD being a terrible watch; quite the opposite — I rather enjoyed the story of how Piper rose to become arguably the greatest heel in the history of the Fed.

Instead, I found little to be actually controversial in his story. He didn’t have a heated jump to a rival brand on television like Ric Flair or Bret Hart did; he didn’t sit in a courtroom like Hulk Hogan or Vince McMahon, nor did he push the limits of physicality like Mick Foley or the boundaries of what is/isn’t appropriate for television like Brian Pillman.

Instead, Piper had a very solid career that was filled with good storylines and fun times with the likes of Hogan, Bob Orton Jr., Flair and others making his career in the squared circle relatively easy.

What may have been controversial, those being his promos, were not challenged at all. By today’s standards, shaving a midget wrestler or making culturally-offensive remarks, like those he did about Jimmy Snuka, would be controversial (his really culturally insensitive remarks came early in his career in Los Angeles, battling the Guerreros, not that we see that here); but this was the 1980s when PC only stood for Progressive Conservatives. It’s not like today where a comment by Matt Striker about Steve Irwin sets people off; back then, it was just par for the course, and if the FCC went after the WWF for Hot Rod’s comments, it was never publicly discussed.

In fact, there are only two spots on the entire DVD that I would really say were controversial at the time of their incidence. The first was at WrestleMania VI, when Piper painted half of his body black for his match against Bad News Brown, which was thankfully discussed in a decent amount of detail, and the infamous HBO interview which lead to his departure from WWE.

Other than that, Piper’s in-ring career is pretty tame. Even his transition to WCW is simple and understandable — they were offering him more money. There wasn’t the huge blow-up over a contract or a threat to not appear on an advertised show — it was simply a business decision Piper made, and made properly.

Now, behind the scenes, it was a different story. Piper was a party animal, and tried many of the more interesting substances available to man. He spoke his mind to promoters, and even once tried to start a union of sorts. Yet this isn’t for-the-record stuff on a WWE sanitized DVD.

Through the disc-plus of matches and the extra disc devoted solely to Piper’s Pit, there isn’t much controversial here either. There are some truly excellent contests and some laugh-out-loud moments from Piper’s quasi-talk show, but there are no, “did he do what I think he just did?” moments; so if that is what you’re looking for, you’re better off looking further down the aisle at HMV.

But, if your goal is to learn about one of the best personalities in wrestling history, to learn the story of Piper’s ascent to wrestling immortality (or at least the popular version of it), to see why all us Gen X-ers think Hot Rod was the best heel that ever lived, I highly encourage you to pick up Born to Controversy: The Roddy Piper Story.