Every generation tells the next that wrestling was better when they were little. Makes you wonder in 20 years if today’s young fans will tell their children about how great WWE was in 2007. 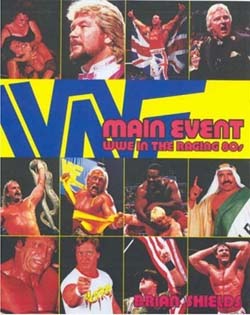 “Main Event is the type of book where people say, ‘Oh, is that who that was,'” Shields recently told SLAM! Wrestling. “Questions are answered like ‘What happened to this person or that person?’ and ‘Remember when this happened?'”

Coming in at almost 200 pages, the book is devoted to biographies of those who were involved with the WWE during the 1980s. Everyone from Hulk Hogan to Adrian Adonis is covered. The biographies cover the wrestlers’ full career, including work before and after the WWE. Although not very detailed, it provides a good background for those younger fans who don’t remember the time.

Although details are told about John Studd’s career as The Executioner, no info in provided on the real names or careers of those who made up Demolition, as it only sticks to Ax (Bill Eadie) and Smash (Barry Darsow) in the Demolition characters. Overall, the book balances the wrestlers overall career, and although limited by space, still provides enough information for everyone to learn something new.

Other sections of the book include a month by month history of events from all of the 1980s, pay-per-view results and a listing of title changes. Everything is accompanied with a short summary of the match or event. The only thing missing, that would have been a nice addition, would be a location of where the title change or event took place.

“In 2005, I consulted for WWE’s Consumer Products department,” Shields said about how the book came about. “One afternoon at WWE Headquarters after gazing in amazement at Andre the Giant’s boots encased in glass, I was asked to take a crack at writing the WWE Superstar introductions for media appearances and live events. Those writing samples along with other works were submitted to WWE for consideration and soon after they contacted me about the book.”

Shields knew the time he wrote about well. He was just becoming a fan when the WWE was going into national expansion in the mid-1980s.

“As a kid, I even wrote a letter to WWE President Jack Tunney that the Tag Team titles should be returned to the British Bulldogs (who had lost the belts to the Hart Foundation with the help of evil referee Danny Davis).”

The book is the latest in WWE’s expansion of their Legends department. DVDs, books, toy figures and shirts of wrestlers from the past have become a hot item. Recently, Linda McMahon mentioned recent DVDs from Hulk Hogan, Roddy Piper, Superstar Billy Graham and Brian Pillman as a reason for record DVD sales in 2006.

“These timeless greats have created an undeniable lasting impact on fans,” Shields said. “These Legends have influenced generations and will continue to do so.”

Main Event is a great supplement to those fans who have little knowledge of the WWE expansion of the 1980s. It will provide a history on events, people and titles.