Kevin Nash is a pretty funny guy. But he prefers to be known as a prick. Seriously.

Meeting with the TNA media horde prior to last month’s Bound For Glory pay-per-view in suburban Detroit, Nash was asked about a slew of topics and commented on several more. 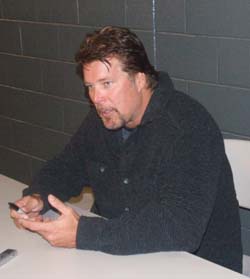 Kevin Nash talks to the press before Bound For Glory. Photo by Matt Mackinder

His role in TNA has been somewhat limited to outside the ring, but that suits the company just fine as his Paparazzi schtick with Alex Shelley is quality entertainment. Nash said he’ll support TNA however he can.

“We have a great product here,” said Nash. “I really want it to succeed. There are really some solid ideas in TNA and some very hard workers.”

Nash is on the downswing of his career as his well-documented injuries have taken their toll over the years. But through it all, the wrestler formerly known as Diesel, among other gimmicks, has preferred to wrestle against the fans. Playing the villain is the role Nash claims to play the best.

“I always love being the heel,” Nash said. “I think it’s easier to act in the ring as close to your real personality is outside of the ring. I’ve always been a bit of a prick in real life, hence the heel role.”

One topic of discussion that was bound to come up during the press conference was Nash’s involvement in ending Bill Goldberg ‘s WCW unbeaten streak at Starrcade ’98. Nash had been booking up until that match and many, including Eric Bischoff in his new book Controversy Creates Cash, claim that Nash gave himself the WCW World title that December 27 night in Washington, D.C.

“I wasn’t booking then,” said Nash. “A lot of people don’t know that. I did not book that match. People think I did. There’s different pay as a booker and I didn’t book that match. I got paid as a wrestler that night.”

Nash also momentarily reflected on the wrestlers he’s been in the ring with and it was a who’s who of the past 30 years.

“I’ve wrestled Flair, Piper, Hogan, Bundy, Backlund, Shawn, you name it,” noted Nash. “But who do I wish I would have wrestled? I never wrestled (Giant) Baba, (Antonio) Inoki or Jesse (Ventura). Hmmm … Tom Zenk. That’s the one that got away.”

Nash also sees wrestlers from the 1990s still going strong. Shawn Michaels is one of them.

“Shawn just turned 40 and I thought I heard he just signed a new five-year deal with Vince [McMahon],” said Nash. “He missed out on the big cash boom when he hurt his back, but he’s as strong as ever now and continuing his success.” 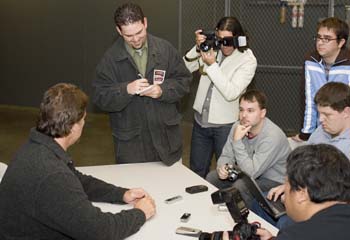 Nowadays, Nash has been giving the TNA X Division fits and the fans chuckles. At Bound For Glory, the opening match was the Kevin Nash X Division Invitational Gauntlet Battle Royal that the returning Austin Starr won and was awarded a six-foot trophy by Nash. Being in a suit or being backstage is what stage Nash is at in his career.

“When I wake up in the morning, I feel like I’m 150 years old,” Nash said. “I always wonder how much longer I can go and my wife wonders how much I have left to prove in this business. I don’t know, but this is what I want to do and being in TNA is where I need to be.

“You see all the young guys here and you remember when you were there. So many of these guys work for free basically. The young guys, like A.J. (Styles), love this business so much.”

Nash also touched on Samoa Joe, saying he’s “something special,” but with reservations.

“Is he a face or heel?” asked Nash. “In the locker room, he’s a face and he’s a riot. They should put the strap on him soon and then I think that’s when even more people will take notice of not only Joe, but TNA as a whole.”

Matt Mackinder almost called Nash “Oz” during this press conference. But he caught himself to avoid a potential Jacknife.