Sting DVD for die-hards only

Since his arrival in TNA Wrestling just under a year ago, Sting has been front and centre in the main event picture, eventually leading him back to a world championship. The company’s latest DVD package, Sting: Return of an Icon revisits much of that journey, but unfortunately, does very little else.

The main section of the single-disc spotlight, released shortly before last month’s Bound for Glory pay-per-view, is a simple rehashing of every match, angle, and promo that Sting was involved in during the year. For anyone who watched the company’s programming as it happened, the DVD brings nothing new or insightful to the table. What’s more, without including the BFG match where Sting captured the belt, they don’t even present the complete story. One has to wonder why they wouldn’t have held off on releasing the disc for a month or so, in order to show the fairy-tale happy ending. 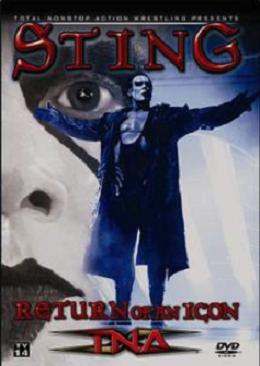 The only real highlights of this section of the DVD are the Paparazzi video segments that were aired for the few weeks when they teased Sting’s retirement. And arguably, even those are only memorable for the hilarious breakout performances by Eric Young.

Even having Sting introduce the matches, or do running commentary for any of the segments would have helped. But unless I completely missed it, there was nothing like that included on the set. It’s a wasted opportunity considering that all of the parties that were involved in the storyline are still with the company today, and really would have helped the presentation.

The part of the set that I did like was the interview portion. There, Sting goes through his entire life story. He goes through his early life pretty quickly, and then covers his early years in the wrestling business, teaming up with the man who would eventually become the Ultimate Warrior. Most of the time here is devoted to his WCW career, which makes sense considering how he really did become an icon of that company. I wish the disc would have focused more of this portion, since it would be interesting to hear his views in depth about the company, as he was one of the only stars who never jumped ship at any point, staying with WCW through the Monday Night Wars and ultimately to its conclusion. These discussions are supplemented by pictures of Sting at various stages of his career from his own personal collection, and him showing off various memorabilia that he has collected over the years.

Also interesting is his open discussion on battling his personal demons, including addiction to pain killers, which ultimately led him to finding salvation in order to save his family and himself. This glimpse into the man behind the facepaint made me like Steve Borden the man far more than I ever liked the character he plays on-screen. Again, though, this part only reinforced how much better this DVD could have been if the interview portion would have been showcased more than the matches.

The other features on the disc are interview snippets with other TNA stars about their favourite Sting memories, and a brief word association segment with Sting where he divulges his thoughts on his peers and colleagues. These are pretty much filler, and don’t really add much in terms of value except to the most die-hard of Sting fans. In fact, that can be pretty much taken as general comment on the entire DVD.

It’s really too bad, because Sting’s storied career is definitely worthy of a full DVD retrospective. But with WWE owning all of his WCW footage, it’s not possible for TNA to put that sort of thing together. As Sting told SLAM! Wrestling’s Greg Oliver recently, “It’s a shame, actually, that all that footage is where it (is) right now. Man, I wish we had some here, but we don’t. We just had to make do with what we have.”

Whether or not that sort of package ever gets made remains to be seen. In the meantime, for completionists and true hardcore Sting fans, Sting: Return of an Icon may be enough to tide them over. For the rest of us, though, I’d say it fails to deliver the goods.