Hornet buzzes back to Toronto

When Stranglehold Wrestling tears up the Opera House this Sunday in downtown Toronto, local indy star Hornet will do his best to sting an opponent or two.

Born and raised in Toronto — although he announces his Fiji Islands heritage as his hometown — Darryl Sharma is excited to be wrestling in front of friends and family once again. After hearing about how much the man known as Hornet has accomplished, it’s amazing to think he only turned pro in 2002. “I had my first match in January 2002 in Ontario. In 2002-03 I was mostly wrestling in various areas of the province and getting a feel for the business,” explains Hornet to SLAM! Wrestling. 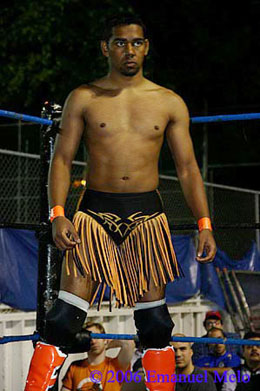 Hornet before the last Stranglehold Wrestling match in August. Photo by Emanuel Melo

The start of 2004 had Sharma’s career progress to competing in the United States, mainly in the Michigan area, on weekends, which allowed him to make some valuable connections. Last year gave the youngster his first taste of wrestling on a full-time basis. “I went down to Mexico for four months; wrestling at Arena Naucalpan for IWRG, Arena Coliseo de Coacalco for PROLLM, and for XLAW in different parts of the country.”

It was this time in Mexico with the IWRG promotion that gave Hornet his first national television exposure. “It was great because we’d do the TV on Thursdays and house shows on Sundays,” he said. “It would always be in Arena Naucalpan and it would always be sold out.”

The 5-foot-10 Hornet showed no signs of slowing down in 2006, as he returned to Mexico to wrestle in Ultimo Dragon’s first DragonMania event and then added to his international resume. “I did a couple of shows in Puerto Rico and followed that by taping six weeks of Irish Whip Wrestling TV in Ireland over a two week span,” said Hornet. After Ireland, he finished up the European tour with a week in England for Brian Dixon’s All-Star Wrestling.

Having competed in several countries with various styles, SLAM! Wrestling asked who Hornet’s sports entertainment influences were growing up. “I was a huge fan of Hulk Hogan, the Hart Foundation, and guys with crazy personalities like Macho Man and Jimmy Snuka.” However, television favourites and emulating styles are two totally different things. Hornet decided on two diverse performers when describing who made an impact on him as far as in ring work goes. “My style is based on guys who’ve travelled the world, like Chris Benoit and Chris Jericho,” described Hornet. “Over the years, especially in Mexico doing lucha libre, I’ve started to develop my own style.”

Hornet’s best friend, indy female wrestler Aurora, feels that she can describe the 185-pound up-and-comer’s in-ring performance best. “Hornet is a jungle boy from The Fiji Islands, the ring is his jungle. He likes to swing off the ropes, or his opponent’s arms and legs, as if they are vines hanging from a tree. It’s what separates him as a cruiserweight, it’s his unique style.”

The superstars of the World Wrestling Entertainment may have been childhood inspirations but the high-flyer owes a lot to local talent. It was hardcore indy wrestlers Bloody Bill Skullion, Notorious T.I.D. and The Custom Made Man who broke him into the business. Hornet admits that having an intimidating figure such as Bloody Bill for an ally in the early stages of his career was a definite bonus. The menacing Skullion has shown the young Hornet the ropes and will be part of Team Canada in the “Death Match Tournament” this Sunday at the Stranglehold Wrestling show. 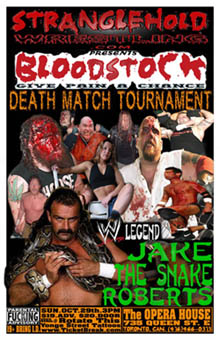 Skullion recounts how quiet and shy Hornet was when they first started travelling on the road together. “Him being so quiet drove me nuts! So what I started doing was, when we’d be in a restaurant after a show I’d find a couple out on a date and I’d make Hornet go over to their table and start talking to the girl.” Skullion laughs as he continues, “he was terrified, but I think he was more worried about what would happen to him if he didn’t do it. He did it, time and time again until he broke out of his shell.”

The 22-year-old has accomplished a lot in a short period of time, so the logical question is, what’s next? “I’ve been concentrating on wrestling around the world and getting solid experience in major companies in different countries, much like the wrestlers I idolize.” For the future he plans on shooting for the top. “Now that I have international achievements I can focus on the goal of wrestling for a major promotion in the U.S. like Ring Of Honor, TNA, and WWE.”

Toronto fans will get a chance to see Hornet and many other indy stars live on October 29 at 735 Queen Street East in The Opera House with the doors opening at 3 p.m. Hornet will be taking on a comedic wrestler named Beef Wellington at the Stranglehold Wrestling event dubbed “Bloodstock 2006 … Give Pain a Chance”. However, the high-flyer does not consider his bout with the humorous Wellington a laughing matter. “He clowns around in his matches and has developed a following in Canada and parts of the U.S. I will stick to my style because pure wrestling beats comedy any day.”