There have been many brother tag teams in professional wrestling, and many of those from Canada, including the Harts, the Rougeau Brothers, and Butcher and Mad Dog Vachon. Hoping to join those legendary names in wrestling lore are Joe and John McCausland, the owners and promoters of Mississauga, Ontario-based UWA Hardcore Wrestling.

This Friday and Saturday, the company presents its biggest show ever since its inception four short years ago. SLAM! Wrestling sat down with the brothers to discuss the company’s evolution from its backyard roots to one of Canada’s largest wrestling promotions, and their plans to reach greater heights in the near and long-term future. 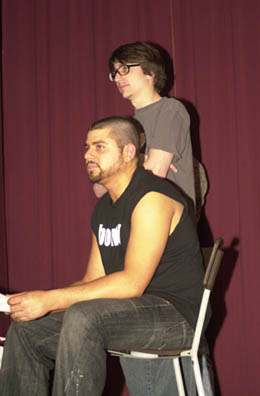 “The company can be first tracked back to 1995,” said John, who also wrestles under the name Osiris. “A friend of mine [and I] were wrestling in the backyard, and I took my first body slam in the grass. We took a cardboard sign, spray-painted ‘UWA’ on it, and hung it up on the side of our toolshed. We put a trampoline in the shed, put a cage around it, and invited all my friends over. Soon, we had a hundred people in the backyard, peering in the windows, watching us kill each other. I realized pretty quickly that I wanted to do this for the rest of my life.”

To achieve that, they quickly realized an actual wrestling ring would be needed. They teamed up and got jobs with their uncle, hauling garbage for three years until they’d saved $10,000, the cost of a new ring.

“Our idea,” explained Joe, who acts as the ring announcer for the company as Joe E. Slick, “was that we would go to indy shows and offer the wrestlers that they could use our ring as a place to train, but to pay us back, they’d have to teach us how to wrestle.”

A wrestler named Fabian Stokes gave them the fundamentals in terms of basic moves and technique, and a lot of the rest — the psychology of a match, and the actual business of booking a promotion — was imparted by a wrestler named Kid Grunge who befriended the duo. It was his advice, John explained, that helped them stage their biggest show up to that point.

“(Grunge) was the one who suggested we do a big backyard wrestling show. So we got a big lighting rig, bought a PA system, and put up flyers all over our school. We ended up having about 350 attend our first real show,” John said. “The lighting, the sound, it really gave us a unique look and feel. Our backyard stuff didn’t look like backyard stuff; it looked more like an outdoor indy show.”

A few months later, it was winter, and they realized they would have to move the show indoors, and they found a location not too far from home, in the Brampton fairgrounds.

“We handed about 10,000 flyers,” Joe recalled. “We spent all of our money (on that advertising), so we couldn’t afford to bring in any names. Some of the guys on that show had some training, but most of us didn’t.”

Still, the result would have to be considered a success: over 400 fans attended, which even today is considered a decent-sized indy show. The response was overall positive, and they continued running shows on a regular basis. Over the next few years, the venue changed, as did the level of talent brought in for the shows.

“Wrestlers started giving me DVDs of their matches,” John said. “I saw one with Colt Cabana on it, thought he was a pretty good wrestler and pretty funny, so found his contact information and asked if he would be part of the show. After that, we brought in M-Dogg 20 to work our second show at St. John’s Hall in Mississauga, which remains the company’s home venue.”

“That show was like our turning point,” recalled Joe. “It gave us a lot of confidence for doing another. And the reactions were really positive from fans and the wrestlers.”

The rest, as they say, is history. The names that they brought in for their subsequent shows resulted in more fans watching the product, and the growth was very much organic. The young (John is 25 years old, Joe 24) entrepreneurs formed new companies that complemented their wrestling show in order to help grow the UWA brand even further.

“We both graduated from a TV production program,” John explained. “So we know how to put together a show, and we don’t have to outsource our DVD production. It’s financially better for us, and we get complete control everything about our product which is how I like it. We started UWA Print, which is our printing design company where we design and print our own T-shirts, we’re developing a UWA On Demand website, and we’ve recently started an online store at www.wrestlingmerchdirect.com, which is going to sell T-shirts that we’ve designed for wrestlers.”

This past week, the company announced its newest venture, which is to be the sole Canadian distributor for SmartMark Video products. This adds to the company’s integrated strategy, as it will give further exposure to Combat Zone Wrestling (CZW) from where many of UWA’s regular are based, one of the promotions heavily sold through SmartMark.

The next immediate priority for the company is this weekend’s double-shot known as the Grand Prix of Wrestling. The Grand Prix is an 8-man tournament featuring wrestlers from various promotions with a variety of wrestling styles. Included this year are TNA’s Sonjay Dutt, Erik Cannon from IWA Mid-South, Dan Paysan from Montreal’s IWS promotion, Okada from Toryumon and CMLL, PUMA from New Japan Pro, and CZW’s Ruckus, as well as one of UWA’s regulars, Bishop. Having that level of diversity in the lineup is a very deliberate strategy, according to John.

“(Even during our backyard days), my goal was to have a big tournament and invite people from all over the world to compete. We wanted to see all the different varieties of styles under one roof if only for that one night,” John said. “I think that this year, we’re closer to that than ever.”

The tournament will span two days, with the opening round on Friday, and the semi-finals and finals on Saturday. Also on Friday will be a tag team ladder match, a strap match, and a grudge match between Josh Prohibition and Jerry Lynn. The main event on the first night pits TNA X-Division champion Chris Sabin against the legendary Ultimo Dragon. Saturday’s show is equally stacked, and non-tournament matches include a a tag team death match inside a steel cage and a six-man scramble match among others. 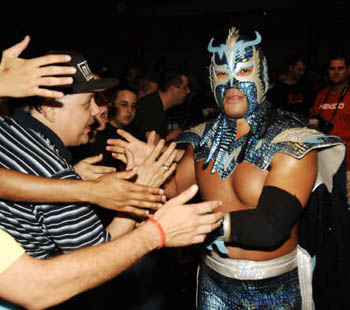 Ultimo Dragon’s participation is one that the brothers are particularly proud of. Over the years, the relationship they have cultivated with the legend has grown from wholly professional to where it stands now, a deep friendship based on mutual respect.

“Ultimo invited us to visit him in Mexico to train and work,” said Joe. “As soon as we got there, he made sure that we were treated like his family. He took so much good care of us for a whole month. We can never forget how much he’s done for us.”

The business aspect of their relationship with Ultimo looks to be growing in the near future as well.

“In about six months to a year from now, ” reveled John, “we’re going to own Ultimo Dragon’s training school in Toronto. What we want is to have Dragon Gym Toronto, where students from the U.S., Japan, Mexico and locally come to live with us. Ultimo is going to send us some of his trainers to come up here for six months or a year and train guys. Dragon will come up on a monthly basis and do a three-day clinic. I think that will become the best training you can get in North America.”

Which shouldn’t be construed as if they don’t believe that the training schools up here aren’t good right now. “On the contrary,” clarified John. “We have some great training up here, some great schools up here in Canada, in Toronto. This will be a different style of training, one that has trainers from all over the world coming in.”

“Picture you only had one type of music to listen to,” he elaborated, “and within that genre there were only two artists. You’d get pretty bored with that really quickly. I want to build a future for wrestling in Canada that has various different styles, that people will watch and it will be different from any other promotion up here. I want UWA to be seen as an international company, where wrestlers all over the world, and fans all over the world come to.”

It’s a lofty goal, but one that Joe and John McCausland are driven to and are passionate about achieving. They’ve had their fair share of accomplishments, and are hoping that more success will follow.

“It’s been a lot of hard work,” said Joe. “We’ve both made a lot of sacrifices. But we love this business and are willing to do whatever we have to do to be part of it.”