DETROIT — On the eve of Bound For Glory, TNA’s biggest pay-per-view of the year, and possibly of all-time, several stars of the company were out and about in the Detroit area this weekend signing autographs and promoting Sunday’s event. 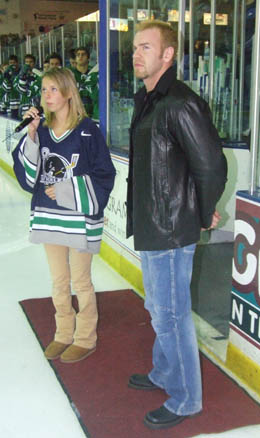 Friday night in Plymouth, Mich., Christian Cage met with fans and took part in national anthem ceremonies for the Plymouth Whalers-Brampton Battalion Ontario Hockey League game. The Whalers won, 6-3, and Cage signed for fans during both intermissions. During the second intermission, he also participated in the Chuck-A-Puck promotion and chose the puck that was thrown closest to the center ice dot.

The public address announcer, Chris Butzlaff, went as far to promote Sunday’s pay-per-view as “TNA rasslin.'” Tickets were given away at random throughout the game.

While most people in the high-class town of Plymouth looked to be in the dark about who Cage is, there were obviously some that weren’t.

“It was great to see one of my favorite wrestlers from WWE,” said Matt Bishop, 20, now residing in East Lansing, Mich. “I don’t get to see him a whole lot with him being in TNA now, but meeting him was definitely a thrill.”

One fan even took off his shirt and had Cage, a Toronto native, sign it.

Last Saturday at the Whalers-London Knights game, Christy Hemme appeared in the same capacity as Cage. Scott D’Amore was also there with Cage Friday night, but didn’t take part in the anthem or autograph signings.

Kip James and BG James, the James Gang, formerly known as the New Age Outlaws in WWE, posed with fans ($10 for a Polaroid photo taken by Gibraltar staff) and didn’t hesitate to do their DX shenanigans or sign photos “Billy Gunn” or “Road Dogg.” Samoa Joe was his typical laid-back self. 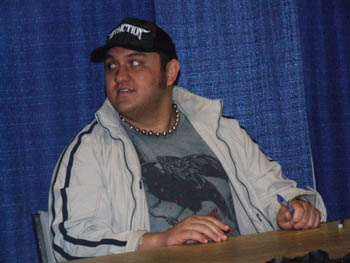 Samoa Joe at the Gibraltar signing. Photo by Matt Mackinder

“I just went for Samoa Joe. If the Outlaws were the only ones there, I probably wouldn’t have gone even if they were free, too,” said 24-year-old Dave Nastasi of Clinton Township, Mich. “There wasn’t much interaction. They basically said hello, signed something and that was it. I only get to sleep in two days a week and today was one of those days. Giving up sleep wasn’t easy, but to meet Joe was worth it.”

In a non-TNA-related appearance, former WWF star Virgil signed autographs for $20 at Gibraltar all day Saturday.

Bound For Glory goes down tomorrow night at 7:30 p.m. from the Compuware Sports Arena. Tickets are still available at the box office, at all Ticketmaster locations or online at www.ticketmaster.com.

Matt Mackinder is pumped to cover Bound For Glory live tomorrow night even if it means Sunday morning he cleans the leaves out of the gutters.