Just as TNA Wrestling was Bound for Glory in Detroit this weekend, marking the company’s first pay-per-view on the road, so ran the first ever SLAM! Wrestling bus trip. Judging by the responses of the passengers on said bus, hopefully this marks the first of many forays for both organizations. 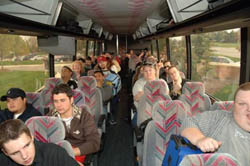 On the SLAM! Wrestling bus, headed for Detroit!  Photos by Mike Mastrandrea

The 48 hours between 5:30 a.m. on Saturday when the bus left Toronto and Monday when it returned were filled with fun and excitement, and one of the best pay-per-view events of the year.

The trip to Detroit felt like a cruiserweight match: overall, pretty quick and smooth, with one blown spot (missed exit) and one sequence featuring a record number of reversals, counters, and turnarounds (blame the city of Kitchener for that, with their narrow streets, confusing streets and poor highway signage).

The trip was highlighted by the awarding of draw prizes. Thanks to the generosity of many of SLAM! Wrestling’s friends and colleagues — The Fight Network, Live Audio Wrestling, ECW Press, Blood Sweat and Ears Wrestling, UWA Hardcore Wrestling, OntarioIndyWrestling.com, and of course TNA Wrestling — there was enough to ensure that everyone on the bus got at least one prize.

The Fan InterACTION event on Saturday was really well-executed, and everyone it seemed got a chance to meet all of his or her wrestling heroes. A personal highlight for me was to talk to Jim Cornette about Ray (Big Bossman) Traylor, about the days when Cornette worked with Ray during his Big Bubba years. Everyone was thrilled by the opportunity to meet the TNA stars and get an autograph and picture. Virtually every star was accessible for photos and autographs during the session, including president Dixie Carter, who mingled among the crowd. This was a classy move, and something that showed that TNA will really go out of their way to earn the fans’ time and money.

This was demonstrated even more by TNA’s offer to hold a special signing session by Kurt Angle the next day, since he was unable to attend on Saturday as his wife was in hospital. Unfortunately, the bus driver was limited by law as to the number of hours he could be on duty, so we weren’t able to make it. Even then, and unbeknownst to the passengers, representatives from TNA approached me after the event to see if we could arrange a private meeting for the bus on Sunday — alas, things couldn’t be worked out in the end, as Kurt was still dealing with his wife’s situation (we at SLAM! Wrestling hope everything went well), but their attempts to specially accommodate us is greatly appreciated. 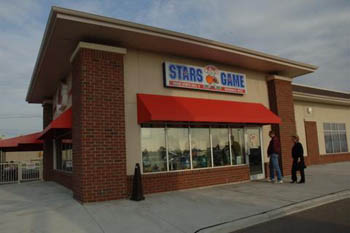 After the Fan InterACTION concluded, the bus headed back to Windsor to dine at Scott D’Amore’s restaurant, Stars of the Game. The drinks and conversation flowed, while we feasted on the delicious buffet that had been prepared for us.

After checking into our hotel, the group were on their own for the night. Some preferred a quiet night to catch up on their sleep, while others hit a bar to watch the Detroit Tigers play in the World Series. The rest headed out to experience the nightlife in downtown Windsor, either at the casino, or perhaps one of Windsor’s many gentlemen’s clubs. In the spirit of bus brotherhood and respect for all that attended, the only comment I’ll make here is that what happens in Windsor stays in Windsor.

Sunday’s trip back to Detroit for the PPV was uneventful, as people shared stories about the night before, and we whet our wrestling appetites by watching DVD’s of hardcore CZW and Big Japan shows (if you heard any chants during the PPV broadcast of “We want light tubes”, they emanated from our group and were inspired by what we saw on those shows). 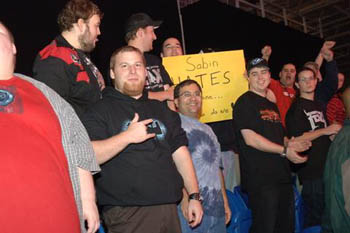 The actual PPV was excellent and we cheered ourselves hoarse over the course of the night. From the beginning through to the final bell, this was absolutely one of TNA’s finest nights. But even more amazing to me than some of the crazy spots and bumps, was turning around and seeing that Dixie Carter herself had come to the section we were in to watch the show, talk to several of our group, and happily pose for a picture or two. Again, the personability of this company from top to bottom has to be commended.

After the show, we headed back to the bus for the ride home., exhausted but overall pleased by the weekend’s events, judging from the comments made as everyone headed for their cars for their ride home. 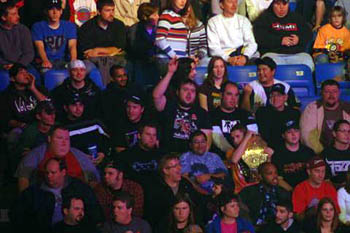 As mentioned, this was the first bus trip that SLAM! Wrestling had ever organized. Like with many wrestling debuts, there may have been a few missteps (nearly forgetting a couple of people at the restaurant comes to mind), but certainly a long way away from deserving a “You F***ed UP!” chant. And like any other rookie, we will learn from the experience, and get even better the next time around.

“Bloodthirsty” Bob Kapur would like to thank Jeremy Borash, Scott D’Amore, Andy Barton, and Steven Godfrey of TNA Wrestling, Sergio at GTA Crew Services, Char Merckle at the Compuware Sports Arena, and Jenny Minello and Carol Anne Turner at the Days Inn Windsor for all their help in organizing the bus trip weekend. Also, many thanks to everyone on the bus — great weekend, all!