WEST BLOOMFIELD, Mich. — “Wow, you came,” Don West said to a group of friends. West, a TNA announcer, seemed to have found some people he knew in the crowd, but digging deeper, it was revealed that the fans drove from Orlando to Detroit for the TNA InterAction Fanfest on Saturday. 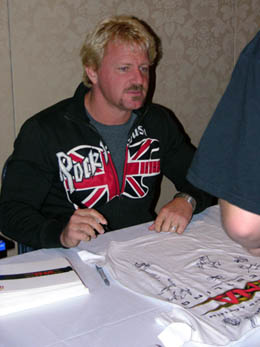 That was only one of the surprising moments that came out of the Fanfest. Fans came from all over: Florida, Canada, Illinois and Ohio to see most of TNA’s roster and have an opportunity to get a photograph and autograph from their favourite star.

Kurt Angle was the only scheduled wrestler that missed his appearance; a good reason was given too — his wife had gone into early labour.

TNA announced they would allow fans who paid for the Fanfest in early at Sunday’s Bound of Glory PPV for a special autograph session with Angle.

Some 1,500 fans paid $50 to get into the event which featured merchandise from TNA as well as some interviews with Jim Cornette, Mike Tenay and others. Polaroids or TNA photos signed were extra.

The event was held at the Shenandoah Country Club in West Bloomfield, Mich., a suburb of Detroit. West Bloomfield is one of the richiest towns in the United States, and the fans that came out were treated like class. Wrestlers made sure that everyone got an autograph and photo if needed.

The PPV is TNA’s first PPV held outside their home base (Orlando or Nashville), and it comes in when the local baseball team, the Detroit Tigers are in the World Series. Bad timing?

“There is a World Series?” Dixie Carter, President of TNA, joked to SLAM! Wrestling. But she was optimistic about the event. “I think the town is big enough and we have some great fans, they will still come to see us.”

A fan noted that cell phone technology will keep fans in touch with the score of the game during the PPV. 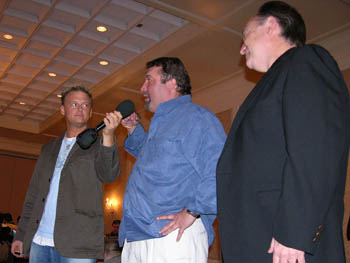 “This is a great opportunity for us,” said Steven Godfrey of TNA public relations. “This is our biggest pay-per-view in many ways, and it just shows we can prove we are growing.”

Neither Godfrey or Carter seemed worried about holding the PPV in Plymouth, Mich., a suburb of Detroit.

Godfrey pointed out that over 3,000 are expected live for the event, as well as TNA moving to 9 p.m. on Spike TV in November. That mixed with the recent signing of Kurt Angle seemed to point to some upcoming changes for TNA.

The FanFest was a great opportunity to show how TNA is different than WWE, showing the fans it appreciates what they do.

It was a great warm-up event for the PPV, and if the FanFest is any indication of how the event will go, TNA has really taken that next step.