Bound For Glory, a suitable name for a PPV that has kept TNA on its path to ultimate success. Several surprises, a card full of good matches and crowd that was so hot it would’ve melted the Impact Zone. Was Bound For Glory an indication of bigger things for TNA? You bet it was. 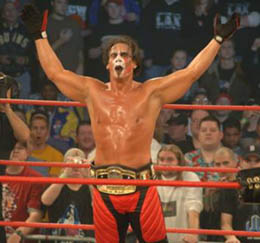 The Compuware Arena in Plymouth, Mich., was rocking as TNA brought PPV there for the first time. The show was headlined by the much anticipated Heavyweight Championship match between Jeff Jarrett and Sting which had Kurt Angle as the Special Enforcer. While the match had the crowd into it, the actual wrestling wasn’t where it should have been.

In the beginning Jarrett had Sting on the defensive, the icon couldn’t seem to get anything going for himself. For each move Sting attempted, Jarrett had the appropriate counter. After several reversals Sting was able to mount a short offense that Jarrett again cut off, sending Sting back to the drawing board.

Sting looked sloppy and slow, really dragging down the match. It was obvious that Jarrett was trying his best to keep it together, but Sting couldn’t manage to get it going. The two combatants collided. The referee administered the mandatory ten count, but when he got to nine Kurt Angle slid into the ring and hit the Olympic Slam on him, telling Jarrett and Sting to get it on.

Angle and Jarrett got into a couple of confrontations but nothing major. Jarrett mocked Angle, applying the Ankle Lock on Sting. The match continued with Jarrett bringing the guitar into play on a weakened Sting. The guitar shot was a vicious one, but instead of knocking Sting out, it woke him up. He shook it over and took Jarrett down, wrenching in the Scorpion Deathlock and capturing the NWA Heavyweight Championship.

Bobby Roode came out to kick off the Pre-Show. He took the mic and began calling himself Robert Roode. He said that he has a CEO (Chief Executive Offender in this case), that is going to bring him to the top, and her name is Ms. Brooks.

Roode dominated most of the early part of the match, slapping Hoyt around. Hoyt came back with a big boot and a slam, setting Roode up for the moonsault when Ms. Brooks came in to provide the distraction. Hoyt attempted the sault anyway, but missed, allowing Roode the opportunity to hit the Northern Lariat, followed by the Payoff for the win.

The show began with a music video hyping the card. One of the more solid cards in TNA history.

Kevin Nash strutted down to the ring with a trophy in hand, joining Mike Tenay and Don West on commentary for…

Match One – The Kevin Nash X Division Invitational – Austin Starr vs. Sonjay Dutt vs. “Maverick” Matt Bentley vs. Jay Lethal vs. A-1 vs. Zack Gowen vs. Kazarian vs. Sirelda vs. D-Ray 3000 vs. Johnny Devine vs. Alex Shelley vs. Shark Boy vs. Mark “Slick” Johnson vs. Short Sleeve Sampson vs. Petey Williams

A hot way to open the actual PPV. The crowd was really into it. Some odd choices were in this one. Why Sirelda was allowed back in a TNA ring is beyond me. A-1 was another one that didn’t belong in there. The Austin Starr look is pretty cool. Lethal took a devastating Canadian Destroyer. Short Sleeve was cool to have in there. Austin Starr and Jay Lethal were the last two in there, leading to…

Back and forth action. Lethal hit the overhead release German suplex for a near fall. Starr countered and came back with a brianbuster for the win.

Post Match – Starr and Nash celebrated with the trophy as Alex Shelley looked on with jealousy.

Clips were shown of Gail Kim taking the Border Toss on Impact. Simply awesome. Jeremy Borash stood in the back with AMW who reacted to the footage, saying that Gail Kim wasn’t there because of that, but they would be fighting for her and they would get the job done, claiming they were the new Border Patrol in TNA.

Match Two – Number One Contenders Match For The NWA Tag Team Championships – The James Gang vs. Team 3D vs. AMW vs. The Naturals w/ “The Franchise” Shane Douglas

The teams did their usual spiels prior to the match getting underway. This one just broke down into an all-out brawl. The James Gang and Team 3D teamed up on the Naturals, with 3D landing the 3D after a Natural Disaster for the win. Too much of a cluster. Wasn’t bad, but could’ve been much better.

Post Match – Shane Douglas hit the ring and began running down The Naturals.

Jeremy Borash was outside of Samoa Joe’s locker room when he was confronted by Jake “The Snake” Roberts. Roberts told Borash that he would make sure the combatants in Monsters Ball had a pulse, but aside from that the only other thing he was going to do was count the pinfall or acknowledge a submission. He also promised Borash that he would see his snake.

This one started in the ring, but didn’t stay there for too long. Samoa Joe was thrown off the entrance ramp several times on his way up, crashing through tables on each occasion. Abyss chokeslammed Runt off a lighting fixture, before diving onto him. When the fight did make it back to the ring, Abyss broke out the thumbtacks. However, it was a Samoa Joe splash that sent Abyss face first into them. Joe applied the Rear Naked Choke on Abyss, but Raven broke it up with a chair shot. He turned around and was met with a DDT from Roberts and a Muscle Buster from Joe for the win.

Post Match – After the match Roberts threw his snake on Raven.

In the back, Borash told Eric Young not to worry so much and to just be confident that he would win. Larry Zbyszko came in and watched Young breathing into the paper bag and said he had enough of Young and said he was going to put him out of TNA.

Not a good match by many standards. Zbyszko can’t continue to go. The end came when Zbyszko went to hit Young with brass knuckles, Young ducked the shot, hit a low blow and hit Zbyszko with the brass knuckles, picking up the win and sending Zbyszko packing.

Match Rating – 3/10 – Only because Young is entertaining.

Jim Cornette came out and announced that if Samoa Joe got involved in the Heavyweight title match, he would be removed from the TNA roster. Kurt Angle came out, followed by Joe and the two went at it once again, brawling up and down the entrance way and forcing a mass of security to break them up. Great build up. 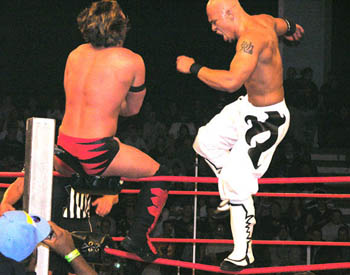 Senshi kicks Chris Sabin during their X Division Title Match at the TNA Bound for Glory PPV on Sunday, October 22, 2006 in Plymouth, Mich. Sabin would go on to capture the title before his hometown crowd.

Before this match got underway, it was revealed that Samoa Joe was ejected from the building. Back and forth, hard-hitting action, what you would expect from Senshi and Sabin. Senshi hit several amazing kicks that sent Sabin for a loop. Sabin was able to counter with his signature move set, including the stalling dropkick in the corner. Senshi attempted to lock in a Dragon Sleeper and land a series of punches, but was rolled up and pinned, giving Sabin the win and the X Division Championship. After the match Jay Lethal, Sonjay Dutt and Jerry Lynn came down to congratulate Sabin.

Backstage Christian Cage cut an awesome promo on how he was going to beat Rhino in front of his family and hometown crowd. Cage is one of the best on the mic.

The match started out in the street, with Rhino bouncing Cage off some parked cars. They fought through the loading dock and onto a zamboni. Rhino threw Cage on the hood of the zamboni and drove him into the arena. They fought to the ring, using plastic street lamps as weapons. Rhino had things going in his favor until Cage broke out a straight jacket. Cage landed a couple shots before the referee released him from the jacket, which allowed Rhino to have another lease on life. In the end, Cage would come back, using a ladder and street sign to bust Rhino open. He then buried him under a plethora of weapons and beat him un-mercifully with a steel chair, eventually gaining the pinfall victory.

LAX cut a promo in the back, saying that they were going to take back the NWA Tag Team Championships.

Mike Tenay and Don West showed a copy of the World Series Program that included an article with AJ Pierzynski where he mentioned TNA. Cool deal.

Awesome match. Lots of high risk involved here. Styles and Homicide were busted open. Hernadnez tossed around the X Division stars like sacks of potatoes. Styles was able to mount and offense and hit a huge crossbody from the top of the cage onto Hernandez. Adversely, Hernandez attempted a head butt of the top of the cage to no avail. Konnan was able to intervene with the use of a clotheshanger, choking out Daniels while Styles received the Cop Killa from Homicide, landing the Tag Belts with LAX.

The Sting vs. Jeff Jarrett feud was recapped, leading to…