TORONTO — Wrestling fans and wresting legends came together Saturday night to share a meal, share some memories, and share their love of the sport at the Titans in Toronto II fundraising dinner for the Pro Wrestling Hall of Fame.

The banquet was the second such event held in the Toronto area (the last one took place in 2004), and was even better this time around according to many of the attendees. For many fans, that was at least partially due to the presence this year of legendary women wrestlers — and Hall of Famers — Mae Young and The Fabulous Moolah. 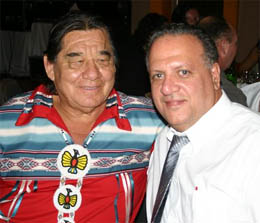 The night started off with Two Rivers saying a traditional grace. That was followed by a ten-bell salute to wrestlers who had passed away since the last dinner was held. Many of the wrestlers in the crowd shook their heads sadly as each name was read, reinforcing the need for the PWHF to ensure that that the legacy of those fallen fraternity members would never be forgotten.

Indeed, as Beyer said later that evening, “I wish I had the time to tell a story about each of them. I hope and pray that (those of us who are here tonight) aren’t on that list for a while. It’s (for people like them) that makes the Hall of Fame so important.”

Later, after a delicious multi-course meal, many of the veterans had a chance to address the crowd. Bobby Bass had the crowd laughing as usual, as did Big Mac who told some funny stories, including a few involving Dave “Bearman” McKigney’s drunken wrestling bear.

Those tales were intermingled with more serious moments, including a heart-wrenching tale from “Supermouth” Dave Drason of ailing wrestler Luis Martinez who is in a nursing facility and, sadly, has forgotten virtually everything about his life as a wrestler. [See A heartbreaking visit with Luis Martinez]

Afterwards, before the keynote guests, Moolah and Mae Young, got their chance to say a few words, the crowd respectfully acknowledged their great careers with a sustained standing ovation for both.

“It’s wonderful to see that we have so many fans up here in Toronto,” said Moolah. “Thank you all for coming and God bless you.”

“I’m happy to see all you folks out here,” Young added. “This is a wonderful night for the Hall of Fame, and I’m happy to be part of it.”

After the dinner and speeches, a couple of items were auctioned off, and a 50/50 draw was held with proceeds going to the Hall. The evening concluded with a band playing until the wee hours of the morning, while wrestlers mingled with their fans, signing autographs and posing for pictures with their supporters.

By all accounts, the event’s organizers — SLAM! Wrestling’s Greg Oliver, Jian and Page Magen of Magen Boys Entertainment, and Andy Stefanides, son of the late wrestler Ali Bey — should be proud of the evening. And proud of their continued efforts to help the Pro Wrestling Hall of Fame keep the legacies of these great performers alive and well.

“The most important thing about tonight,” said Stefanides, “is to make sure these people get their recognition. It’s to make sure that the stars that were here tonight, 100 years from now, that they will have their names remembered.”