Sinking Ship gets to bottom of WWE stories

From the very second that WWF.com (as it was then) announced the company’s purchase of World Championship Wrestling from Ted Turner, it was obvious that wrestling in America would never be the same again.

Vince McMahon, after all, had now won the war. From this day forward, the WWF’s competition would be at their own discretion; never again would fans see a Monday Nitro without McMahon’s personal say so. 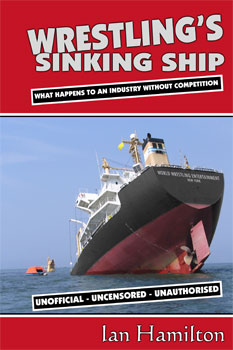 Furthermore, McMahon was now sitting on perhaps the biggest treasure chest in American wrestling history. The thought of WCW’s top star Bill Goldberg facing “Stone Cold” Steve Austin or The Rock was, for many fans, positively mouth-watering. With such a high level of fan interest, the company would be in line for some incredible box office business.

At least, that was the plan.

What actually happened is the subject of a new book by Englishman Ian Hamilton, entitled Wrestling’s Sinking Ship: What Happens To An Industry With No Competition. The title says it all.

“When I started writing the book, a part of me felt that there was another story that needed to be told, especially seeing how the WWE had slumped to the point where they needed ECW to revive some interest in the promotion,” author Hamilton told SLAM! Wrestling. “Of course, by the time the book came out, ECW had been revived as a third WWE brand, further highlighting the main theme in the book: without any real competition, you either have to create it yourself, or die a slow death. WWE has made a half-hearted attempt to do the former, while creatively inching towards the latter.”

Hamilton’s “slow death” theory is certainly backed up by the evidence he produces in the book. Away from the obvious calamities involving the “Invasion” angle, Katie Vick, and the abuse of Eddie Guerrero’s name, the author reminds us of largely-forgotten nonsense, such as Triple H and Stephanie McMahon’s custody battle of their dog, and Paul Bearer being encased in concrete — but not killed, apparently.

“A lot of the feedback I’ve had so far has been from people who have been watching Raw and SmackDown religiously every week, but had forgotten that a lot of the stuff had even happened,” he said. “Right now it’s recent history, but it’s still interesting to go back and see just what really happened when the dying WCW was bought out, then exhumed and killed stone dead in the space of eight months by WWE.”

Overall, the book’s positives are in its writing and its research. The book is wonderfully easy to read, and unlike many books, will not have readers scrambling for their dictionaries. To quote Jerry Lawler, “you should never use a big word when a diminutive one will do.”The research too, has obviously been extensive, as the book works chronologically from March 2001, right up to June 2006. That’s a lot to cover, but I still found myself reminded of things that I had long forgotten.

But while the book’s writing is of a good standard, and the research is equally so, if there is a criticism to be made, it is in the actual subject matter. Whilst it would probably be beneficial for old-school wrestling fans to know exactly what has been happening in McMahonland since 2001, it is not that much fun to read about how McMahon has destroyed the business that many of us used to love. So you have been warned, if you can’t currently bring yourself to watch WWE TV, you may be best to avoid reading about it.

Another minor criticism is that I would have liked a little more commentary from the author, rather than what is mostly just a telling of the story. Hamilton does chirp in with a few comments, but mainly leaves the WWE’s storylines to do the talking themselves.

These are relatively minor criticisms however, and as a whole, the positives far outweighed the negatives. I have no hesitation in recommending it anyone who takes any more than a passing interest in World Wrestling Entertainment.