Corino happily busier than ever

Even though Steve Corino hasn’t been part of a major North American company for the past few years, Canadian fans have had plenty of chances to see him wrestle lately. If the self-professed King of Old School has his way, they’ll get even more in the near future. 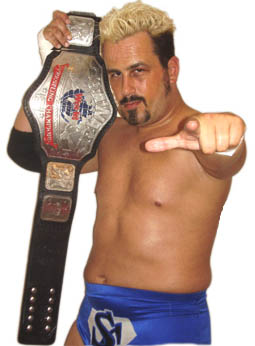 “It seems like I’ve been working in the Toronto area every weekend this year,” Corino told SLAM! Wrestling at a recent Blood Sweat and Ears show in Mississauga. His appearance at BSE was an unannounced surprise, and a shock to many fans who knew that Corino had wrestled earlier that day at a PWA event.

“I would estimate that in 2006, I’ll probably have 210 dates,” he said, “when normally I have about 180 a year.” That number includes the shows for Zero-1 Max in Japan where Corino spends half the year on contract.

“The deal with Zero-1 allows me a lot of opportunity to freelance, which works out great for me. I’ve worked all over the United States, Europe — in England, Germany, and Finland — and Canada. To not be (signed to a restrictive contract), as I would be if I were in WWE, for example, lets me pretty much pick and choose dates that I want to do. I’m pretty much my own boss. If I want a weekend off to do something with my son, I can book it off. If I don’t want to work with a specific promoter, I don’t have to. (Having that type of career freedom is) a pretty cool position to be in.

Because of the flexibility that his contract allows, Corino isn’t sure that he would give it up if the WWE came calling. Even if it was to work in ECW, where, during the original company’s run, Corino became a world champion.

“Honestly, I don’t think there’s any interest from their side. I talked to Paul (Heyman) a couple of times, and apparently the opinion is that I’m too anti-establishment up there, and (that I’m considered) hard to work with. Besides,” he continued, “I don’t think I’d really fit in. I don’t know if I could work their schedule and work within their rules. I don’t think I could do their standard four-minute match; I take a lot of time to play the crowd, try to get them into it — sometimes I don’t even lock up until after the three-minute mark — I’d be lost doing it (in WWE’s style).”

Additionally, signing a deal with WWE would mean giving up a lot of his Japanese dates, and Corino has no intention to do that.

“I love (wrestling in Japan). I’m a big fan of the style over there — the Samurai spirit, never-say-die fighting spirit. Plus, I love the (other workers) there, they’re my best friends. Some of the Japanese wrestlers are closer to me than some of the guys I work with in the States. I wouldn’t be able to give that up, unless they really offered me the right deal.”

It may seem odd that a wrestler would eschew the relative security of WWE in favour for a career on the indy scene which is subject to constant fluctuation and overall economic variability. But Corino is more optimistic about the indy scene, sensing an upturn to come in the next year or so.

“I would say we’re almost getting out of the depressed stage,” he predicted. “I think (the market) is healthy now and it’s getting better (after its recent lull). There are a lot of quality independents out there right now, and there’s a lot of work out there. I think we’re just missing one thing to make things boom once again, and I think that boom is only a couple of years away.”

Corino doesn’t know exactly what the missing ingredient may be, speculating that it could be a combination of a wrestling superstar and mainstream attention, “like the last big explosion that took place when Mike Tyson and Stone Cold Steve Austin (went face-to-face on live TV). Whatever it is,” he laughed, “I’m sure Vince (McMahon) will figure it out — and once his business goes up, everybody’s will go up.”

That type of boom would presumably spark interest in all things wrestling again, including wrestling books, a project that Corino is very interested in doing.

“I actually have an autobiography written,” he divulged, “and I’m shopping it around to publishers. I had one, but (the market for wrestling books isn’t so hot currently, and) they let my option run out.”

The book, he says, is different from a lot of the others in the genre, in that there is not too much focus on the negative side of his career.

“It’s not about the bad things that happened, but rather it’s more about the fun things. It’s pretty much the story of a fan of the business who managed to do all right for himself in it.