GLOW still corny as ever on DVD

GLOW is back! GLOW is back! Well, it is back on DVD at least. Gorgeous Ladies of Wrestling, for those who might have forgotten, was an organization that ran from 1986-1989 and offered up something very different than the NWA and WWF.

The promotion was built on the television season premise, with girls disappearing between seasons. It was a different kind of wrestling show during the time as skits, weird characters and angles were put ahead of the wrestling. And, of course, the organization was all female, most of whom had no prior wrestling background. It was actually ahead of its time, if you look at today’s WWE female division. 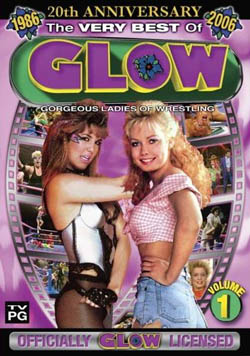 The Very Best of GLOW: Volume 1 reminds of us of all the corniness that was GLOW. The latest DVD is being distributed by Big Vision Entertainment. It is the largest distribution deal the promotion has held, and the first one under new owner, Ursula Hayden. Hayden, also known as Babe the Farmer’s Daughter, bought the company in 2001.

“I am very happy with the DVD,” Hayden told SLAM! Wrestling. “It took a while, but I hope we can keep putting out footage.”

The DVD features six matches, one of which is a 20-girl battle royal. Hollywood is featured twice, as she was one of — if not the most popular GLOW girls ever. Plus heavyweight Mt. Fiji is booked in the typical handicapped match. This is post-David McLane commentary, so we get “Motor Mouth” Mike Morgan doing the play-by-play.

Unfortunately, this DVD features one full episode and two bonus matches. It is not a true compilation DVD that normally bares the name “Best of.” The episode featured is from Season 4, the final season of GLOW. The quality, coming from the original master tape, is something you won’t get digging through your old VHS tapes.

Features on this DVD are:

If you were a fan of the show, this is a great DVD to have. It is just as corny today as it was back then, but that is what made it so great. The corniness that was made fun of when it first aired can easily be compared to angles and matches the WWE has put out in the last few years.

This is a start for GLOW as Hayden plans on releasing a Volume 2 set in October. She is also working on releasing original footage that has never aired before.

“I am working on some new projects that will show what made GLOW so popular,” said Hayden.